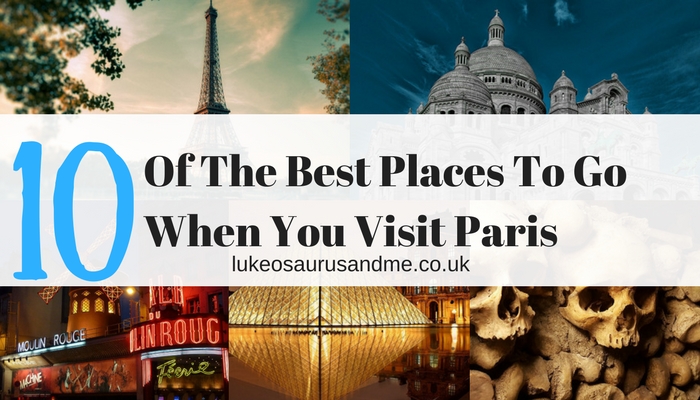 Earlier on this year, I went to Paris for a week with my best friend. Luckily for both of us, we had previously both visited Paris together as part of a larger group, so we both had a good idea of what we wanted to do and where we wanted to go.

Exploring a city in a country where you don’t speak the language fluently is a bit of daunting. I definitely felt a little anxious about leaving home and leaving Luke for an entire week. I was also worried about my ability to get around and communicate with people. It turns out, I shouldn’t have worried at all.

Paris has so much to offer and we found it surprisingly easy to navigate the metro, with the help from a few apps we downloaded before travelling. We also found a lovely lady who spoke English that worked at the train station. We got lucky with that one!

When you’re on a budget, you often look for the cheapest holidays available. Just because it’s cheap, it doesn’t mean it’s rubbish. We had an amazing week and I’m going to share my top picks from the holiday, as well as some places I definitely would love to visit on our next trip over.

If you go to Paris and you don’t visit the Eiffel Tower, did you even go to Paris? This iconic landmark doesn’t disappoint. We decided to do a lot of walking when we were there to save a bit of money and I can tell you, walking towards this building is a pretty impressive sight. We visited it at night time when all the lights were on and you could see it for miles around. It’s definitely worth a visit! If you’re braver than me, you can queue to go to the top of the tower in a lift, or you can opt to walk. Alternatively, you can stay firmly on the ground!

Can you really go on holiday without taking the time to soak up some culture? Home to Leonardo da Vinci’s Mona Lisa, the Louvre is apparently considered the greatest art museum in the world. Upon entering, it’s easy to see why. The museum is huge and has a wide spectrum of art spanning the ages. It’s easy to lose a good few hours in here, so take your camera!

The Arc de Triomphe is more than a big building in the middle of a crazy busy roundabout (not an exaggeration, it’s very hectic!). This is a building with real historical importance. I would suggest using the underground to get there as crossing the roundabout is a death wish. The security here is tight, however, it’s possible to climb to the top for some amazing views.

Could you visit Paris without visiting this iconic cathedral? The queues to get into the Notre Dame can be quite long so it’s best to head there early in the morning to avoid the rush. You could easily spend an hour or more wandering around inside this beautiful cathedral. Even those who are uninterested in the religious significance will be able to appreciate this Gothic masterpiece.

So it’s a bit of a mouthful to pronounce, but this 19th-century basilica was built by the French government and offers an amazing view of the city. The cathedral sits beautifully on top of a hill, so there are a fair few steps to climb in order to get to the top.  It’s 100% worth it though. The cathedral is absolutely beautiful, both inside and out. The setting is amazing, the basilica is amazing and the views of Paris are amazing!

So it may seem odd to pop along to a cemetery when you’re on holiday, but this was one of the attractions we were both buzzing to see! This famous cemetery is the burial site of numerous French luminaries – authors, writers, musicians, princesses and more. Along with being the final resting places for iconic ‘celebrities’ like Oscar Wilde and Jim Morrison,  Père-Lachaise has an extremely rich history and a huge number of significant people throughout the ages are buried here. We spent almost an entire day here, there was so much to see and it is such a beautiful, peaceful place to visit. Make sure you wear comfy shoes because the whole place is paved with old cobble stones. I’d advise getting a map upon entry too!

Again, maybe not your classic holiday destination, but I was desperate to go here! I’m not sure how incredibly lame this is, but I’m a huge fan of the Assassin’s Creed franchise and Unity is set right here in Paris. When you’ve been running around learning ‘first hand’ about some of the city’s history and representations of what may have happened here, it’s pretty cool to then go and visit these places ‘in real life’. Unfortunately, when I last visited Paris, the catacombs were closed. I’d recommend booking your tickets in advance because this equally morbid and fascinating attraction often has queues that can exceed 4 hours. Also wear some comfy shoes, you’ll be walking about 2km underground and the passage walls are made of bones.

An imposing building with a lot of history, I’d recommend a few hours here to soak it all up. The Pantheon was built when architect Jacques-Germain Soufflot met Louis XV’s wish to glorify the monarchy in the form of a church dedicated to Saint Geneviève, the patron saint of Paris. The Pantheon has a rich history and if you’re into post French Revolution heroes, this is the place for you. An impressive building outside and inside marks the final resting place for many people of significance.

Who can forget about Disneyland Paris? Located a fair distance from central Paris, it’s still really easy to get to using the metro and RER. Here you’ve got two parks: Disneyland and Walt Disney Studios. We spent a few days here easily and we still didn’t visit every little nook and cranny, or go on all the rides. If you’ve a fan of having your world completely rocked, definitely head to Disneyland (and stay for the closing time firework show!) Ticket prices vary depending on season and the age of those attending, so make sure you check out this post all about Disneyland Paris Ticket Prices to make sure you get the best deal possible.

Moulin Rouge – home of the French Cancan and, ultimately, the birth giver of cabaret! This iconic club is known world-wide and has been in films and TV shows for years. You can pop along here and enjoy a show full of feathers, rhinestones, sequins and champagne. Moulin Rouge promises and unforgettable night out!

What if you’re already in Paris and you fancy exploring a bit more of France, or Europe for that matter? Here are 15 of the best day trips to take from Paris, including Normandy, Monet’s Gardens and the Champagne Regions.