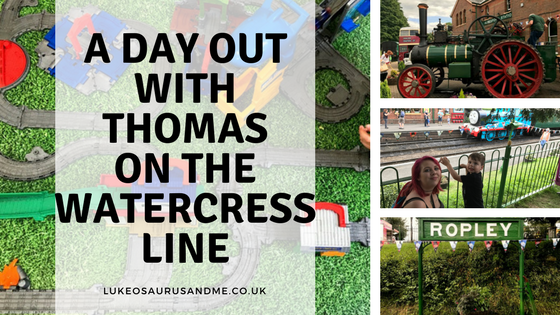 Luke hit the motherload in terms of exciting treats recently when we took him along to see Thomas the Tank Engine and all his friends on the Day Out With Thomas event on the Mid Hants Railway Watercress Line.

Like every child, Luke has been obsessed with Thomas since he was a toddler. It’s not often you get the opportunity to see your favourite characters in real life, let alone ride on and interact with them. As an adult, it’s also not often that you see fully working steam trains whizzing about! So come Sunday morning, the whole family was buzzing and excitedly scrambling to get out of the front door to start our Day Out With Thomas.

Arriving At Day Out With Thomas

We started our journey at Alton where we parked our car for the day and entered the train station. We went up over the bridge to the far side of the station where the Mid Hants Railway Watercress line runs. The platform and stops all along this line have been preserved and decorated to ensure they look authentic and they’re incredibly pretty platforms. We followed the green railings, the beautiful 50’s sign posts and all the colourful bunting until we came to a quaint little ticket office. We grabbed our family ticket and Luke was given a whole bunch of goodies.

These goodies included things such as a Thomas the Tank Engine Passport, a sticker, a certificate to remember our day with and some other bits and bobs as well.

We climbed onto the train and it was like being transported back in time. You know those carriages on the trains on Harry Potter? Well that’s exactly what it was like on board the train. The seating was comfortable and spacious and there were tables between seats in some of the carriages. We found ourself a table and decided to eat our picnic on the train as we were planning on staying on board all the way to Alresford and then we’d work our way back along the stations during the day.

Considering these are old, original trains, I was surprised and pleased to see how spacious they were. The doors are quite narrow in comparison to modern train’s double doors, but once you’re on, there’s loads of room. There are carriages where buggies can be left, each train has a toilet and we also had a buffet carriage. There is quite a big gap between the train and the platform floor, some children were managing perfectly as there’s a little step that comes off the train, but Luke struggled a bit and needed to be lifted onto the platform.

The play tables were a huge hit with Luke and all the other children. It was great to see some of the play sets you can buy and Luke was happy to play with new toys and interact with the other children there too. It was lovely to see them creating their own scenarios and whizzing the trains around the tracks.

Mikey and I thought we’d be the really cool parents and get ourselves some temporary tattoos, but Luke wasn’t so keen on the idea.

We left the Imagination Station and popped downstairs to the gift shop to grab ourselves some ice creams, a Thomas toy (well, it is nearly Luke’s 4th birthday!) and a fridge magnet. Yes, we’re one of those families that collect fridge magnets from all of our adventures! Then we headed outside to see Trevor. He had an impressively loud whistle on him! I was fascinated with the size of those wheels and had to have a picture of my two boys and Trevor together.

We also saw Bertie the bus, Luke was really excited to see him, but was a bit sad that he wasn’t allowed to climb inside.

We headed down the pathway a bit to the Cattle Docks, where we ventured inside a train carriage and spent ages watching the model railway of Thomas and his friends on the Watercress Line. Luke was mesmerised and we spent quite a while here just watching the trains chuff around the track. There were little stools dotted around for children to stand on so that no body missed out.

We jumped back on our steam train and headed for the one of the front carriages, hoping to hear and see some steam! Our next stop, Ropley, was where most of the action was. We had spent a little while at Alresford already, so we were planning on spending the rest of our day here as there was so much to get through. If you want to start your day here, as it is where the majority of the events take place, there is free parking available!

At Ropley we were spoiled for choice. The most exciting thing here was Thomas! You can go on a ride with Thomas that lasts approximately 15 minutes, you can also ride in Diesel and Toad. We spent a little while here watching the steam funnelling out of the trains and waving hello to Thomas.

After all that excitement, we headed to Rusty’s magic show, where we also saw the Fat Controller! Luke and I watched the show for a little while, which was excellent, and then left to wave hello to Thomas again. Then off we went for a little stroll to work out what should be next on our list of things to do. We ended up buying ourselves some fresh cinnamon doughnuts and tucking into our treats in the picnic area next to the playground, which allowed Luke to blow off some steam (excuse the pun).

By now the day was getting quite late and 4:30pm was the last train home. We’d had a brilliant day, but we were all starting to get a little tired, so we decided to end the day on a high and go on the tea cup ride. Luke loves these types of rides, he always gets really excited but he doesn’t have much experience of them, so he also gets a little nervous. We dashed towards a big shiny red tea cup – one he had been eyeing up in the queue – and we had a fabulous time spinning around.

We were on top of a hill, and the view across the train yard and all the fields was gorgeous. We really were in the country and it was breathtaking. Luke waved to Mikey every time we spun past him, while Mikey tried, and failed, to get some decent pictures of us on the ride.

After that, we headed back down to Ropley station and hopped on our train back to Alton. There is another stop at Medstead and Four Marks on the way home, where there were a few Thomas activities going on, but we decided that we were going to head home and play with the new Spencer train we’d picked up from the gift shop earlier in the day.

Things We Didn’t Do

There was just so much going on during our Day Out With Thomas, that we just couldn’t find the time to get around and see everything! You really get spoiled for choice, so we had to miss out a few things from the day – hopefully we will pop along again next time and tick these things off our list.

In Alresford, there’s the opportunity to ride in a diesel shunter, which looked really cool. We would definitely try and do that next time we go. In Ropley we didn’t quite manage to ride behind Thomas or go on Diesel or Toad, which is a bit of a shame, but at least we know what we’re heading straight to next time the Watercress Line has their Day Out With Thomas event on. We would also pop along to the miniature railway, the bouncy slide and the story corner, if we went again.

Watch this 40 second clip to see what we got up to!

A Brilliant Family Day Out

We had an absolutely brilliant time during our Day Out With Thomas on the Watercress Line and it’s made me realise that we should have gone along to see Thomas and his friends a lot sooner! I can’t wait until it’s next on, so that we can grab our tickets and head straight to the places that we missed this time around. If you’re local to Surrey or Hampshire, I can honestly recommend this as a seriously great day out. It’s family friendly, dog friendly and fairly accessible – although that is relative to your needs.

It’s also definitely worth checking out the Watercress Line’s website, www.watercressline.co.uk, and having a look at what’s on. There’s loads of family friendly days, as well as some more grown up events, such as the Ale Train. The Ale Train is regularly visited by my other half and his friends!

If you’re on the look out for other days out and attractions in the Surrey and Hampshire area, click on the image below to check out my blog post which features 95 amazing days out, attractions, and free things to do in the area.

Days Out: A Day Out With Thomas On The Watercress Line