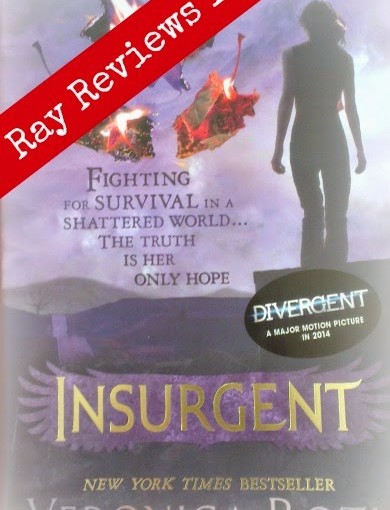 I wrote a really brief review for Good Reads this morning, but here is my slightly more detailed and constructive review.

If you are looking at the Divergent series to fill a hole in your soul after The Hunger Games, then STOP RIGHT THERE! People who read this book expecting it to be the alternative to The Hunger Games are just being silly and expecting something that can never be done. The Divergent series is a different story in it’s own right, you should keep that in mind while reading it; you may find you enjoy it more! THG is a wonderful dystopian concept and wonderfully written, but it seems to somehow have found itself the King of dystopian novels  – whether that’s down to the writing, or the age of many members of the fandom, I don’t know – what I do know is that it is not the ONLY good series. I am not sure why it is now necessary to compare every other dytopia genre book to it.

I for one found Insurgent to be an exciting, action filled and relatively fast paced read. I spent more time reading and putting off the things I was meant to be doing once Luke was asleep, like tidying and cooking. I did not want to put this book down. In some places, it really can be a great page turner.  It is action filled to the very end, something major is going down and Tris is going to find out what and why, especially if it’s dangerous and potentially life threatening. The main protagonist,  Tris is kick ass and stubbornly determined to get shit done. Four and Tris’ romance is so angsty. Who doesn’t like angst? And complements the plot nicely. Some character’s have changed since Divergent and there are also a few surprises in store.
I found that Tris’ character has grown on me since Divergent. She basically defies everything, which leads to some “oh here we go again moments”, {I eye-rolled A LOT during Divergent} but I suppose that’s to be expected throughout the series as some moments are rather predictable. However, instead of just being a little Madam, Tris now has legitimate reasons to tell everyone to bugger off. I am more impressed with the character development in Insurgent than I ever was with THG {yes I know, Hunger Games comparison that I told you all off for – but it’s to prove a point!}
I found Insurgent to be a good and entertaining read. I absolutely loved it. I am really excited to read the next installment and see how this thing ends. I would highly recommend, but not if you’re looking for another Hunger Games! Some just gloss over the Divergent series, my OH for example read it, didn’t think much of it and now doesn’t remember too much. I was, obviously, gripped though. The story isn’t amazing but it is fast paced and action filled. You can’t not enjoy it, at least not at the time. Sometimes, yes, it is predictable. Tris will go against everything she’s been told, Four will get angry, yes that character will be the one who has a change of heart. But if you look past all that, you’ll experience a tiny thrill and sense of satisfaction when it all ends! { No spoilers from me!}