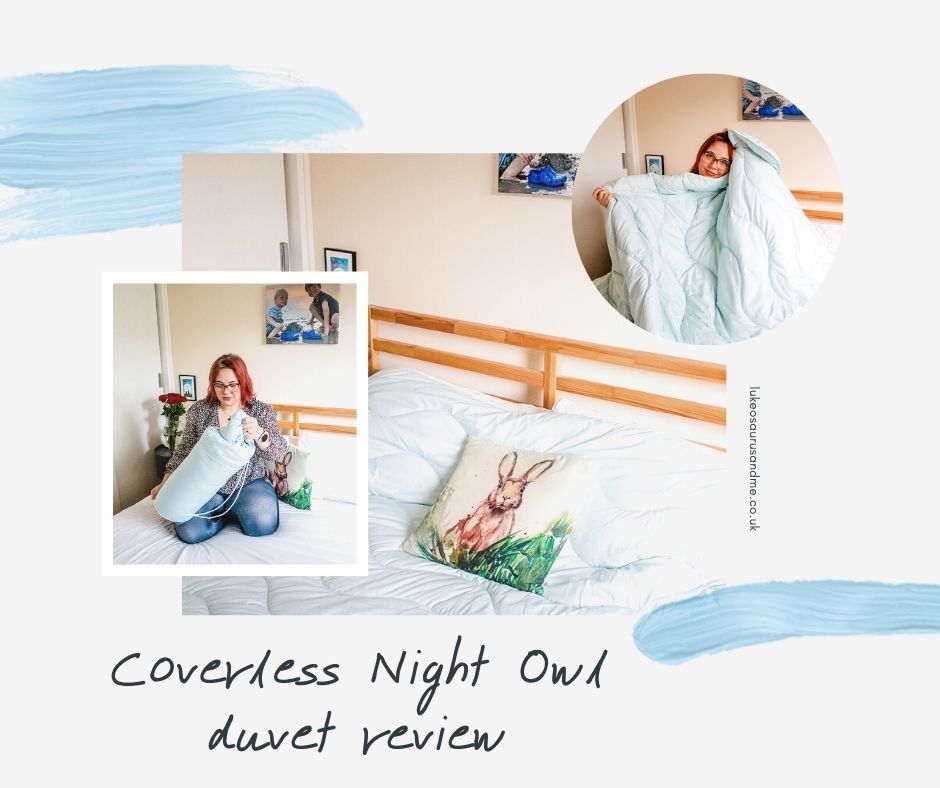 I have only recently heard about coverless duvets, but oh my – what a game changer! I’ll admit that at first, I was sceptical. I had a few concerns, I mean, when it comes to your bedding, you want it to feel great, look great, and be amazingly comfortable.

That’s a lot of things to live up to and, having never used coverless duvets before, I was worried it just wouldn’t quite tick all the boxes. I am very pleased to say that I was completely wrong to be sceptical. In fact, I know coverless duvets to be a total life saver.

If you want to know why coverless duvets are amazing AND how they’ll make your life as a parent, keep reading!

I only discovered coverless duvets in the first place because I was emailed and asked if I would like to try one out. Honestly, changing the bedding on a king size bed should be classed as an Olympic sport – and one I clearly do not have the stamina to competitively compete in! The prospect of not having to climb inside a duvet cover and wave my arms above my head for 10 minutes was quite appealing. I replied to the email eagerly, intrigued by the idea of a coverless duvet, and excited about the idea of just being able to throw it on the bed and try it out straight away.

Having had a look on the website, eventually I chose the Night Owl Duvet in Aurora Green. It’s a beautiful pastel shade of green, and oh my gosh, the colour is even more beautiful in person.

First impressions of the coverless duvet from The Fine Bedding Company

The first thing to mention is the packaging of the coverless night owl duvet. The duvets from The Fine Bedding Company arrive in really convenient drawstring bags – quite similar to that of a sleeping bag. Getting the duvet out of it’s bag was no problem at all and I was immediately excited by how soft and silky it felt.

Usually when I review things, I keep it all completely pristine so that I can take photos and make sure everything’s perfect before they get anywhere near my kids, however the excitement surrounding this duvet was just too much. As soon as I pulled it out, I was really happy with the colour, and how soft it was – the kids couldn’t wait to test it out. They both snuggled under the Night Owl duvet straight away and watched a movie before I could even get anywhere near it, giving it a big thumbs up and their seal of approval.

I chose a light tog so that we could make use of the coverless duvet during the summer, as well as using it as an extra blanket or layer during winter. I am one of those heathens that sleeps with a fan on all night, even in the middle of winter, so I am prone to throwing duvets around and turning myself into a sleeping burrito whatever the weather.

We decided to use it on it’s own as I had changed the rest of the bedding that day already. I didn’t have any bedding that matched the aurora green colour, so I went with white – I think it looks pretty! There are matching pillow cases that you can buy separately from The Fine Bedding Company, and I think I might invest in one if they’re as soft and comfy as the Night Owl duvets.

First Impressions of the coverless duvet

The mister and I had different first impressions. He was unsure at first. He expected it to be noisy and not keep him warm during the night. By this time, I had already made the bed and made it all look pretty, so he was blooming well testing it out with me whether he wanted to or not! I was a bit sceptical too, I had chosen a light tog and it felt so lightweight while I got under it that I wondered whether I’d get cold in the middle of the night. Obviously that wouldn’t have been any fault of the product’s- just my bad choices! Luckily, in the morning, we both agreed on a verdict.

I asked the mister in the morning what his thoughts on the Night Owl duvet were. I was so pleased to hear that he had changed his mind completely and had totally warmed to the coverless duvet. He pointed out that it was really comfortable and a lot warmer than he thought it would be. He was also really pleased that it wasn’t noisy, and it was lovely and light. He slept well with it, even though he went to bed thinking he wouldn’t – I think that’s a pretty decent verdict.

And I would have to agree with him! I particularly loved that because of the beautiful lightweight fibre the Night Owl duvet made from, it keeps you lovely and warm when you’re underneath it and it feels amazingly silky and smooth on your skin. If you stick your foot out in the middle of the night like I do (I ain’t afraid of no monsters under the bed!), then you’ll really appreciate the ‘cold’ feel of it against your skin; it’s like the foot version of loving the cold side of the pillow.

The Night Owl duvet has been designed to make your life easier, and it really does. There are some great benefits, but here are just a few:

Save time and make your life easier with coverless duvets

I have really loved using the Night Owl duvet and I am actually considering purchasing another one for my kids. Luke has a particularly annoying habit of tossing and turning a lot in his sleep, so his duvet always ends up scrunched up in a ball in the middle of his duvet cover. It’s a real struggle every day to sort it all out again, so this would really make his life, and my life, a lot easier.

My youngest, Oscar, is two and we’ve already gone through the shortage of bedding that comes with sick bugs and bed wetting. Sometimes his pull up leaks and it won’t be long until he’s in bed without any pull ups at all – it would be great to have a quick washing and drying duvet to throw over him when he needs it most.

Of course, there’s also that famous scenario when you’ve spent the whole day rushing around, you get home, and you realise that there aren’t any sheets on your bed. All you need to do is pull the Night Owl duvet out of it’s little carry bag and chuck it over a sheet and you’re good to go. No more faffing with duvet covers (aka my nemesis!)