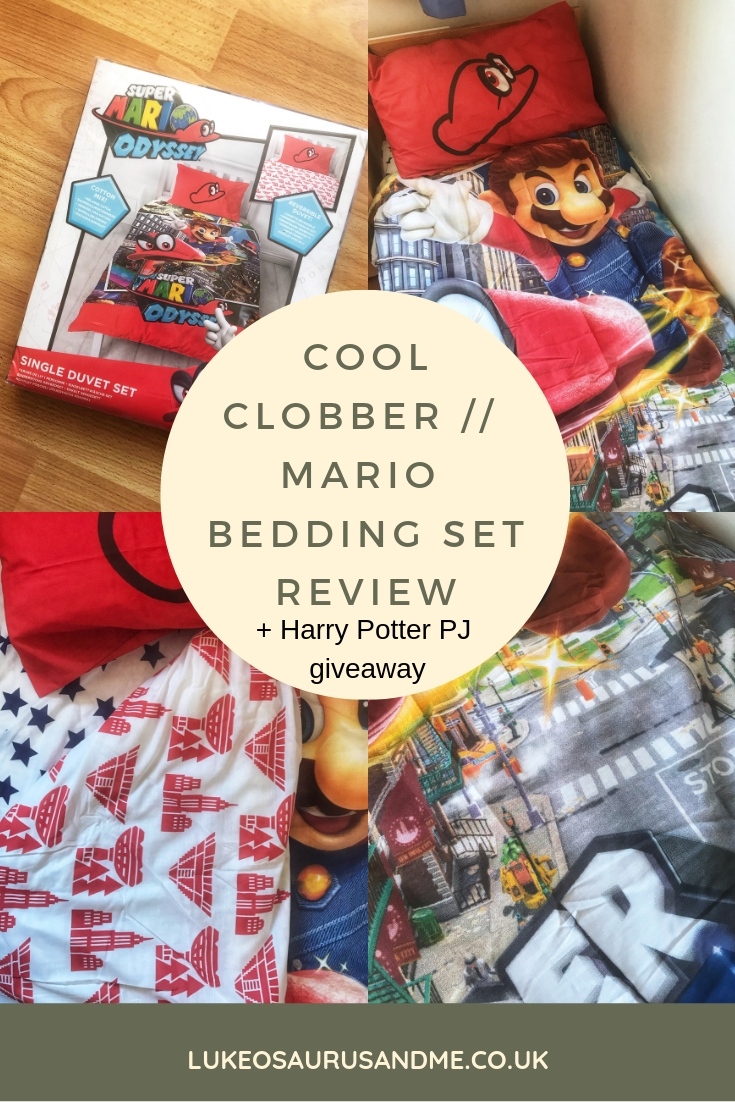 Luke has now reached the age where he wants his bedroom to really reflect his personality and interests. We have definitely reached the phase where all things Marvel, Nintendo and Harry Potter seem to hold a special place in his heart. I think that allowing children to express themselves through the characters they see and love is just as important as letting teenagers have posters of boy bands or football teams on their walls. I encourage Luke to have all sorts of interests, in the hopes that one day when he reaches his teen and adult years, he’ll have hobbies that will enable him to interact with like minded people, hold a job in a field he’s particularly interested in, or maybe just so he has something interesting to do in his spare time that makes him happy.

*Please note this post contains affiliate links and an item that has been gifted for review. All thoughts are my own.

When Cool Clobber got in touch with me and asked if I would like to review something from their website, I thought it would be a perfect way to inject some colour and excitement into Luke’s bedroom. Recently Luke has discovered Mario Kart on the Nintendo Wii and he is absolutely obsessed with it. Now, with the release of Mario Odyssey on the Nintendo Switch, I thought this amazing Super Mario Bro Odyssey bedding set would look fantastic in his bedroom.

If you’ve not heard of Cool Clobber before, they are the leading online retailer of children’s character bedding, pyjamas and bedtime accessories. They have a huge selection of characters, from Marvel and Disney Princesses, through to Go Jetters, Harry Potter and Minecraft. To make things easy, when browsing their items, you can search for products via character. The list of characters goes on and on, which is great as we all know how much love our kids have for their favourite cartoon characters! You can also search for products by gender and by type of product you’re looking for, eg. bed sets, blankets and pyjamas.

The Super Mario Bros Odyssey Bedding Set that we received to review is a great size, fitting Luke’s single duvet perfectly. The poppers stay firmly fastened while the bedding is in use, which is great as Luke does tend to toss and turn a lot in the night. The colours and details are both very clear and you can clearly see all the people in the background of the image, just like you’d expect. I’m glad that the quality of the image hasn’t been lost when transforming it from image to item! Sometimes duvet covers lose their details and smaller details appear blurry, so it’s nice to see that this duvet set from Cool Clobber is made to an excellent quality. Luke’s new duvet cover is also reversible, so no matter how he’s feeling at bedtime, he can either snuggle down with Mario and his pals, or fall asleep under the white and red bold city patterns.

After a recent sick bug struck the household, I had the opportunity to test how well the Super Mario Bros Odyssey set washes. It washes well in the machine and the colours didn’t seem to run, which is great because I was forced to throw it into the machine with a lot of other bedding too, including white patterned bed sheets. The fabric is light and dried quickly, but it is also Tumble dryer safe.

Overall it’s a great little bedding set that would make a fantastic addition to any Super Mario Fan’s bedroom. The bedding set costs £22.99 (Dec 2018), which I have to admit seems a bit much for a single bedding set – but if you want good quality character items, they’re always going to cost a little extra.

Cool Clobber have very kindly agreed to give me a fantastic prize to giveaway to one lucky Lukeosaurus And Me reader!

For your chance to win either a boys or girls Harry Potter Pyjama set from the Cool Clobber website, simply click the “Giveaway” link below and follow the Rafflecopter instructions. Please ensure that you read through the T&C’s before entering and note that this is a UK only competition.

Top 8 Places Every Photterhead Should Visit

Days Out: Wizard Weekend At The Watercress Line

Christmas Gifts For Kids and Babies 2018

Kit Your Kid’s Bedtime Out With Cool Clobber (giveaway)