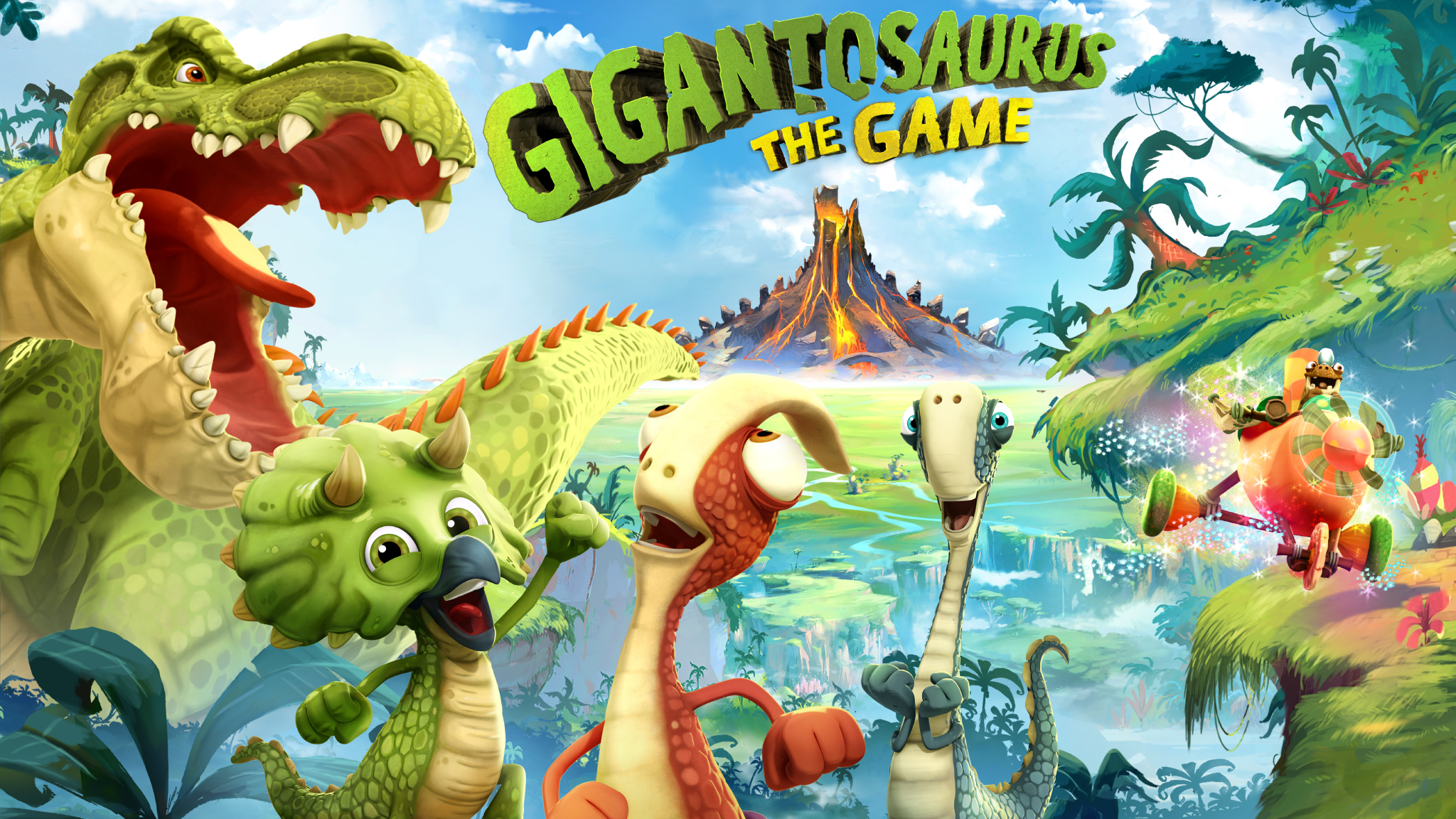 Here at Lukeosaurus And Me, we love all things dino related! My biggest boy, Luke, has been mad about dinosaurs since, well, forever! Therefore, when we were asked if we’d like to give the brand new Gigantosaurus game a bit of a play through ahead of its release date (April 3rd), Luke and I were eager to take on the challenge.

Gigantosaurus: The Game – A Roarsome Adventure!

Gigantosaurus: The Game is a PEGI 3 adventure and racing game based on Disney’s hugely popular animated TV show, Gigantosaurus. 1 to 4 local players (couch co-op) can cruise around the Savannah and other exciting zones with their favourite dino buddies Rocky, Tiny, Mazu and Bill, helping to save the day. Available on Xbox One, PlayStation 4, Nintendo Switch and Steam, Gigantosaurus: The Game is an egg-cellent way to entertain the little ones over the Easter holidays.

This roarsome adventure game puts your racing skills to the test, challenges you with exciting geography and terrain as well as encourages kids to use their noggin and solve puzzles in order to save the day. Occasionally, your little team of dinosaurs may even require the help of Giganto himself.

On paper, Gigantosaurus: The Game sounded like the perfect adventure game for children, so Luke and I couldn’t wait to get stuck into it! We were gifted a code that meant we were able to digitally download the game straight to our Switch, however physical copies are available to purchase from Amazon and Smyths.

Gigantosaurus: The Game – Our Review

As soon as the game finished downloading, Luke (6) was on it straight away, selecting ‘regular’ from the choices of difficulty. The other option is ‘easy’ and this is described as giving you more pointers on how to interact with the game’s world etc. This would be a perfect difficulty level for newbie gamers.

The Gigantosaurus game starts off with a story that sets the scene; this is read to you, so make sure you turn the volume up! Subtitles also appear automatically on screen, which is a great ‘pro’ point for me as I’m a huge fan of gaming subtitles – it means you don’t miss anything! After a few minutes of cutscene, we were thrown straight into the game and taught how to move around. The first thing we have to do is chase down those pesky egg thieving velociraptors! A purple mist appears on screen which helps guide the way for the player – this is another huge ‘pro’ point for me as it’s so easy to get completely lost and lose motivation on games with large maps, especially on a game designed for children.

After following the mist and collecting some mysterious seeds along the way, we caught up to the cheeky egg stealing dinos and we came face to face with the gigantic Giganto! Giganto, a huge T-Rex, scares away the smaller dinosaurs, leaving our fearsome team of dino buddies to retrieve the egg and take it back to it’s nest. As soon as the egg is returned, the game starts to pick up pace.

Now that the basic principle of the game has been explained, players are let loose into the world of Ginganto and all his fellow dinosaurs to explore, collect, race, plant trees and more!

Players can run around and jump into new and exciting challenges, as well as being able to switch between the four dinosaur heroes: Rocky, Tiny, Mazu and Bill. Each dino has it’s very own special ability, which means that in order to complete the game, you must switch between characters to activate specific bits of the map. For example Mazo can build levers that activate lifts and Tiny can headbutt logs, which causes them to fall over and create bridges over land or water.

With different quests come different zones, and with different zones, comes different terrain and different challenges. At the moment, Luke’s still in the first zone, but as you can see from some of the incredible screenshots, a whole new world awaits our fearless players while they fight to save themselves from extinction.

Our thoughts on Gigantosaurus: The Game

The game play really strongly reminds me of the type of games I played as a child on the original PlayStation. Channeling platform puzzles similar to those from those unforgettable 90’s video games, such as Sypro and Crash Bandicoot, Gigantosaurus: The Game is a classic in the making.

As a parent and an avid gamer, I love the gameplay in Gigantosaurus: The Game! The challenges are exciting and, importantly, they’re not overly difficult and they’re not too easy either. The puzzles and the character movements create enough of a stimulating challenge that draws players in and gets them hooked on trying to overcome the obstacle in front of them without giving up.

Watching Luke play on the Nintendo Switch, I’ve noticed sometimes he finds particular bits of the map difficult to maneuver around on his first attempt. Areas where you must jump from one springy flower to the next, for example, takes more than one try. It’s great to see him not giving up and throwing a tantrum because he can’t do it! Instead, he heads back to the beginning of the challenge and tries again. This is brilliant to see and I hope that this attitude of ‘keep trying, you’ll get there eventually’ sticks with him in real life as well.

Would I recommend Gigantosaurus: The Game to a friend?

Yes, definitely! If you have a child around 6 or 7, I think that Gigantosaurus: The Game would be a fantastic introduction to video games for them. Likewise, if you have a child who’s new to gaming, this is a brilliant introduction from Outright Games, showcasing some great gaming strategies and challenges. Luke has limited screen time like most children, but when he’s got the choice between playing a game that mentally stimulates him or watching TV, he’s chosen the game every time.

If you’re looking for a game to entertain the children over the Easter holidays (or the rest of the Covid-19 outbreak), Gigantosaurus: The Game has definitely been a GIGANTIC hit in our house! Don’t forget that you can buy the game digitally from your console e-store, or you can order the physical copy from Amazon and Smyths stores.