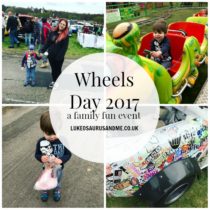 This week’s Living Arrows post is full of firsts for Luke. We went to Wheels Day – a car event that happened to be hosted in our town of Aldershot this year.

We headed out to the Rushmoor Arena around 10am and met up with some friends, it was a real family event with lots of families around and we took Luke who had lots of his friends to play with while we were there.

As well as tonnes of cars, bikes and camper vans, the event also hosted a whole bunch of fair ground rides and stalls. These things were all firsts for Luke!

He went on his first ever bouncy castle…He loved it! He wasn’t great at staying on his feet, but he bumped around on his bum a lot and eventually got a bit more confident and ended up just flying everywhere. It cost £2 for approximately five minutes on the bouncy castle, which seemed like a pretty decent deal.

He also went on the caterpillar train. Obviously he had to be the one up front “driving” the train, while the rest of his friends chose to sit at the back (they must be the cool kids). Mikey and I were really impressed that Luke seemed to actually be “steering” the train. He turned the wheel right when they went right, then straightened up, then went left etc. It was quite fun to watch. You never realise the things kids pick up really!

He had his first ever taste of candy floss. At first, he was very skeptical. Once he saw the other kids we were with tucking in, and had some gentle encouragement from Mikey, he finally took a bite and his eyes lit up! He ate half a bag before we had to clean up his very sticky hands and face.

After a little while, Luke got a bit tired from all the walking and running around playing with the other kids and on all the rides. So obviously he had to have a little sit on Mikey’s shoulders for a while – to be fair, he probably had an excellent view from all the way up there!

After a little while we had to head home as we had spent most of our cash on the rides and kind of forgotten about packing any food (great parenting there!) Everyone else was cracking out the picnics and we had a hungry boy on our hands. So we had to head home and get some lunch, but it turns out that was really good timing as I think the whole event was a little overwhelming.

Overall it was a brilliant morning out and the whole family had an excellent time.

We’re looking forward to taking Luke to more events and shows over the summer and hopefully remembering to pack food!