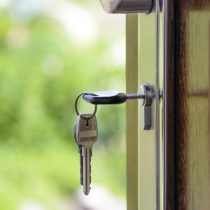 We are finally moving home!

I have waited years for this opportunity and believe me, it has been a very long and frustrating wait. I am so over the moon to be able to say that I am officially moving out of my rubbish one bed flat and that I officially have a move in date for a brand new, two bed, beautiful modern flat.

To put things into perspective, I have lived in my current address for near six years – long before Luke was with me.

A one bed flat above a shop in town wasn’t really an issue at the time I moved in. If anything, it was kind of an ideal location.

However, there were a few problems that soon developed and my landlord didn’t do anything to rectify them. The corridor leading to my flat is just plaster – damp plaster, the fire alarms didn’t work and for about a year we had no hot water or heating. It was a nightmare. I lived there with my ex, (Luke’s dad) and whether it was all to do with him having said he’d talked to the landlord repeatedly and this was all a lie, or whether it truly was a neglectful landlord, I’m not sure. But I’m willing to say it’s probably a bit of both.

While I was pregnant and just after Luke was born, we had severe damp and still no heating, hot water or fire alarms (actually the fire alarms only got fixed a few months ago and Luke’s now 3). I mean, the wall above the bed was black and flaking off. Something had to be done. We were all getting ill. If it was making me ill and Luke’s dad, what was it doing to m precious newborn?

When Luke’s dad and I broke up, a whole bunch of family and friends took it upon themselves to redecorate the entire flat and use mould proof paint. The whole process was a bit of a mission and the entire 1 bed flat took about a week to clean up, repaint, and make habitable again.

Since all that, I then ended up living with another person. It being a one bedroom flat, Luke ended up having the bedroom and our bed ended up being in the living room/kitchen. Despite that relationship being long gone and over, I’m still sleeping in my living room/kitchen (which quite frankly is embarrassing) and the corridor outside is still just damn plaster and floorboard stairs.

So besides the disasters with the place, it’s also full of years of rubbish memories that I can’t wait to escape.

Looking To The Future

The first thing I noticed was just how bright the place was. The windows are big, but double glazed (in the old place I have two 7 foot single pained windows – it gets really cold!), and the building faces the right way so that it always seems to be sunny. When I look outside, there’s no multi-storey car park towering over me, blocking out all the natural light. There are no drunk people fighting in the streets on a Saturday night. Instead, there are just other people’s back gardens, trees, hedges and peacefulness.

I just know that all the brightness and natural light is going to do so much for my mental health. Even on the greyest, rainiest of days, this new place will always be so much brighter and cheerier than my old place has ever been.

This marks a whole new chapter of mine and Luke’s lives. We are hoping that many new starts also occur as a result of this new chapter – we want to master eating proper food and not being quite so fussy; we’re yet to master toilet training (Luke seems to be terrified of the actual toilet) and then hopefully after we have got to grips with these things, he starts school in September and I go back to work. We’re also moving in with my partner, so it’s a huge step in mine and his life too. We have so many plans for the new place and exciting adventures coming during the summer.

We have lots of plans and hopes for the rest of 2017, but I’ve got to say – one month in and I am already a million times happier than I ever was in 2016.