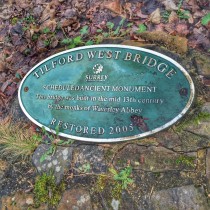 January 18th is AA Milne’s birthday – the wonderful man responsible for gifting the world with Winnie The Pooh!

It would be sacrilege not to honour the date, especially as a parent living in an area surrounded by woodland and enchanting historical bridges. January 18th presents us with the perfect excuse to play a good old friendly game of Pooh Sticks!

Living on the Surrey/Hampshire border means we have a lot of beautiful places on our doorstep, many of them wooded areas – just like The Hundred Acre Wood.

Luke was a bit stroppy and full of cold, he also had a nasty chesty cough, so we opted for somewhere very close by to us, the quiet village of Tilford, near Farnham in Surrey.

One of the bridges here is a pedestrian bridge, built in the 13th century by the monks from Waverley Abbey and restored 11 years ago. It’s built over the river Wey and makes for the perfect place to have our Pooh Sticks game.

There were lots of sticks and twigs readily available near the bridge as Tilford woods is only a few yards away. Luke loved throwing the sticks into the water and running to the other side to watch them reappear. At first he didn’t understand the concept of throwing them into the water on one side and watching them from the other, but he soon got the hang of it, after some encouragement from Grandpa.

The “usual” game got adapted pretty soon after Luke discovered he could throw multiple sticks in at once and watch them make a big splash (wow!) and then watch them all reappear at different times on the other side of the bridge.

There was a slight heart-attack moment where he crouched down to pick up a twig and lost his balance, nearly toppling through the barriers into the water below! But thankfully he regained his balance before I had to dive in after him!

Luke loved watching his Grandpa snap the twigs in half by standing on them or breaking them against his knee. Luke tried to copy this, when he realised he couldn’t do it, Grandpa became the chief twig-snapper! It’s a very important job!

Playing Pooh sticks for AA Milne’s birthday was the perfect way to celebrate. It was a great outdoor activity for Luke, (Luke aged 2) and wasn’t too taxing even though he was a bit poorly. He hated it when we had to leave, but it being January, it was still a little bit nippy.

We had a lovely day and I couldn’t think of a better way to celebrate the creator of Winnie The Pooh – with my kiddo and his Grandpa out near the woods playing Pooh Sticks and making big splashes!

What are you favourite outdoor fun things to do? Let me know in the comment section.