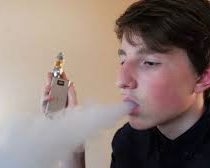 Yale has recently completed a study showing that vaping is on the rise among teens. As vaping does not leave a smell, like cigarette smoke, it is harder for parents to determine if their child is doing this. Additionally, the style of e-cigarettes makes them similar to a James Bond-style pen which is able to deliver nicotine through vapor.

The study by Yale states that approximately one in four high school students have tried vaping and that 3.5% of middle school children have as well. The study also found that many more were at least considering it. This has been attributed to children being less scared of trying vaping than traditional cigarettes.

One of the reasons why children are more willing to try e-cigarettes is because they believe them to be safer than traditional tobacco products as they are designed to help adults stop smoking. While e-cigarettes do not contain the thousands of toxins that traditional cigarettes do, they still provide nicotine which can lead to hypertension, heart attacks and cardiovascular problems.

The e-cigarette market is still relatively new which means that it is still fairly unregulated when compared with traditional tobacco. However, 20 states have banned the sale of these items to minors the others still allow it. This is why it is important that you know how to tell if your child is secretly vaping.

E-cigarettes do not have an odor like traditional cigarettes which is part of the appeal to young people. However, many of the vapors have been flavored to make them more appealing to people. So, if you get a whiff of candy, mint or fruit punch without there being any it should be a red flag. These flavored varieties of nicotine are more popular with younger people as it makes vaping more pleasurable.

Vaporizers and e-cigarettes do not generally look like cigarettes and can look like a range of different items. It is possible to mistake them for a thumb drive or a cool looking pen or stylus. If you see something like this in your child’s possessions it might be worth taking a closer look. If there are holes on either end of the item then it is likely that you are looking at an e-cigarette.

One of the ingredients in vaporizing liquids is propylene glycol which attracts and holds water molecules. This means that when the vapor is in the mouth it attracts the moisture that is there. This leaves many e-cigarette users with a constant case of dry mouth which in turn leads to constant drinking or sipping of liquids. Another effect of this is dry skin, so be on the lookout for this.

The moisture holding effect of e-cigarettes not only affects the mouth. It will also dry out the nasal passages which can lead to nose bleeds.

Saying No To Caffeine

When using e-cigarettes, there are some people who will develop a sensitive to caffeine. If your child suddenly passes on caffeine when they would not in the past this could be a red flag. It is not only coffee that they would stop drinking by energy and soft drinks that contain caffeine losartan 50 mg.

There are many signs that you should be aware of which could tell you that your child is vaping. It is important to be aware of these signs and to further investigate them if they are showing up.

5 Ways To Tell Your Child Or Teen Is Vaping