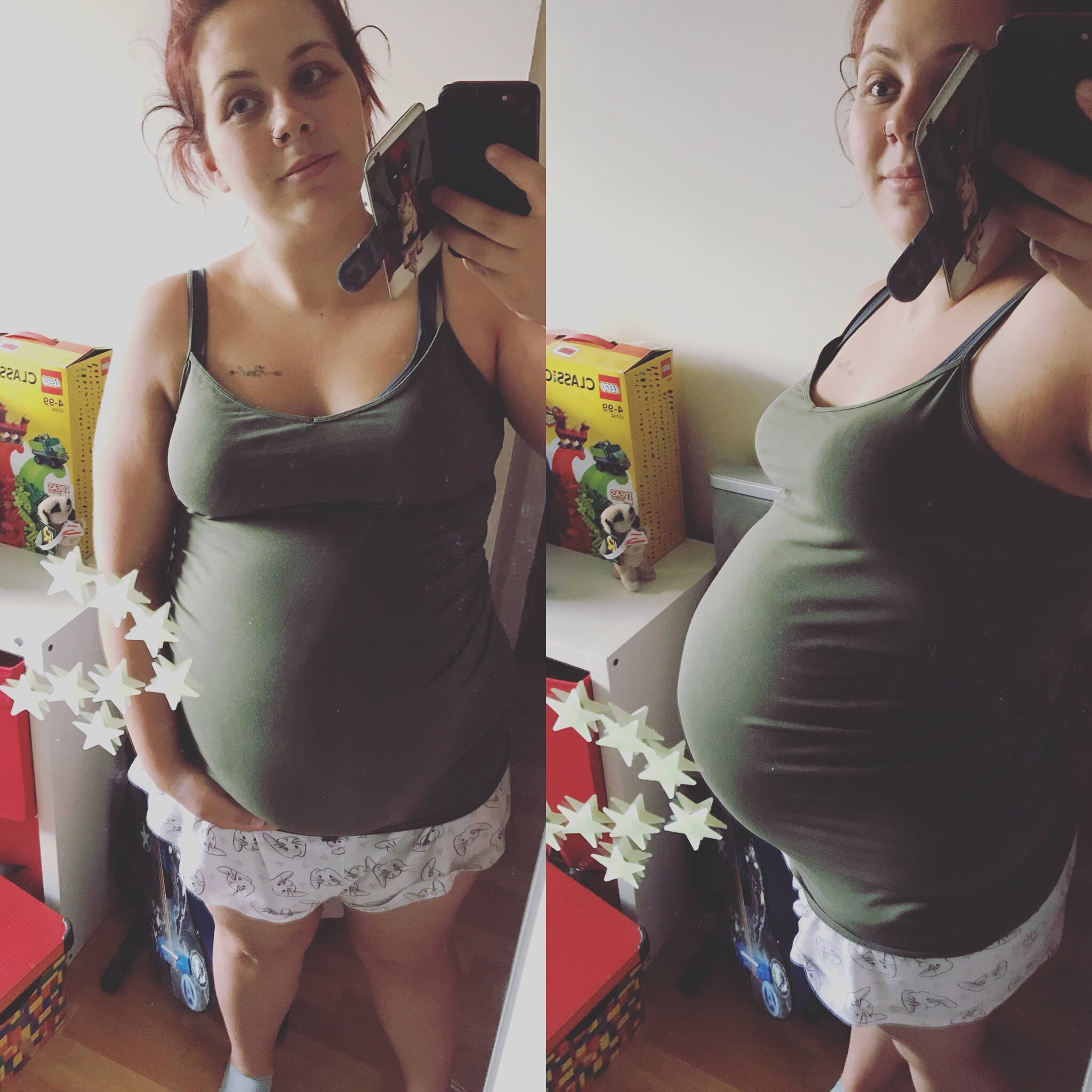 Oh my goodness, I cannot believe that I only have less than one week to go until my due date. How has this pregnancy flown by so quickly? It seemed like the HG went on forever and ever, but once that died down around 4 or 5 months in, the rest has been a blur. The last few weeks have been quite difficult thanks to the UK raging heat wave, but thankfully this week, it seems to have broken and is much cooler. It’s hard to believe this is the last ever pregnancy update I will write and that the next time this little bump gets a mention on my blog, he will be an actual tiny little human! Let’s hope he’s not late like his big brother was!

Uhm, they don’t really fit me that well any more. My maternity dresses are all getting a little short at the front…! I have a few tops that I can still squeeze into that are non-maternity and a few pairs of shorts – all from Primark, that I’m currently living in.

No new stretch marks as of yet! I’m hoping this means I’ve got away with it. My tummy has been feeling really itchy this last week or so though, so I have been mixing up my lotions and potions and have started using something a little more ‘hardcore’ to combat the itchy skin. I’ve started using the Colief Mum To Be Moisturising Cream which seems to be doing a good job!

Well I’m still definitely needing my Ear plugs to get me through the night, as well as my trusty pregnancy pillow. Since my last update at 32 weeks pregnant, I took a break from the Spatone, but now I’ve found myself back on it and I’m hoping it will get me through these last few weeks/first weeks of having a newborn. I’ve still got brand work to complete, so there’s no time to give myself ‘maternity leave’ or have a few naps (although I did have a lovely lie-in this morning), so I’m trying to keep my energy levels up.

Last Friday I had my 38 week appointment with the midwife and things got a little bit worrying momentarily. She said that bump hadn’t grown in the last two weeks and that we needed to head to the hospital for a scan. We had to get through Friday, Saturday and Sunday before our appointment mid-morning at the hospital. We were obviously both a little anxious, but I did keep telling myself that up until this point, the baby has been really healthy and he’s also full term, so if anything did need to be done, there would be a good chance that everything would be fine. Anyway, the best bit of this week, bizarrely, was that appointment, as it not only meant that we got to see our little bean pie, but we also found out he was really healthy still, has lovely long legs, the placenta is still working well and that he weighs approximately 7lb 8oz!

Right now the only thing I’m missing is being able to shave my legs/bikini line and, possible TMI – be able to clean up after going to the toilet more easily. That sounds odd, I know, but I can’t blooming reach anything because I’m so huge and bump squashes my lungs still. I’m looking forward to being able to bend over and just do normal things again.

I’m getting loads of really big movements. Knees or elbows poking and sweeping around, poor guy must be running out of room! He really needs to move down, although I have read that with second pregnancies, babies tend not to engage properly until the actual start of labour. For now, he is 4/5ths engaged and his little head is in position – his bum still up high and making it difficult for me to breathe.

Snack bars! I went to Tesco with Mikey last weekend to do our food shop, because as frugal as I like being, Tesco has a toilet and Lidl doesn’t! Anyway, I really, really, really wanted snack bars. I was stood at the end of the biscuit aisle when I said to Mikey I wanted to pick some up and he said they were over by the cereals. So off I wobbled, all the way to the other end of the store to pick up my precious snack bars, only to find they weren’t there! Well, I must say, the pregnancy hormones got the better of me a bit and I may have over passionately complained that there were NO SNACK BARS here and that they were, in fact, where I was standing in the first place. Mikey apologised profusely and the woman in the aisle was chuckling to herself while I huffed off in a mood. Ooops.

Anything making you queasy or sick:

My Hyperemesis Gravidarum seems to have died down now and I no longer need to take medication often. I’ve actually felt really good lately, apart from the other night when the heat got the better of me. I wasn’t sick, but I woke up at 4am and just lay awake for a few hours feeling like I was going to vomit. The heatwave in the UK has been really tough for me to deal with and definitely affected my ability to function properly and sleep well. Luckily, Mikey came home from work with another, taller fan for me the next day after I told him about it and that really helped. He’s a good egg!

We are having a boy!

Not really, which is annoying. For the last few days I have had twinges between around 9:30.10pm when I walk around, but if I sit down, these go away. They do seem to be getting stronger day by day though. Hopefully, one day this week (fingers crossed), they’ll turn into proper contractions, or my waters will break, or maybe I’ll even get my show. I’m really hoping that there is a mini sign before the first stages of labour, just so I know what’s happening. With Luke, my waters didn’t break but I did have my show. However, my show only came along after 2 sweeps, so I have everything crossed that I don’t need a sweep or my water’s breaking and that everything will just happen on it’s own!

My awful, horrible heartburn seems to have died down a bit. Thank the lord! I thought it would never end. I did have a fair bit the other day when I decided to try and get baby moving by eating a pineapple, but I suppose that is to be expected. I’ve got very swollen feet and slightly swollen hands, but that all seems normal and the midwife is happy with this. They’re not crazy swollen, so all is good.

Belly Button in or out?

It’s still in, I don’t think at this stage it is going to come out any further. It did pop out when I was pregnant with Luke, but for some reason this time, it hasn’t. I wouldn’t say there was a dip though, it’s definitely flush with the rest of my tummy.

Happy or Moody most of the time:

Happy most of the time! I’m amazed at how different this pregnancy has been compared to my first. I feel happy and well, mentally I’m doing really well and I’m excited to meet our little boy.

There’s only one thing lefts now: I’m excited to meet our baby! Hurry up little dude.