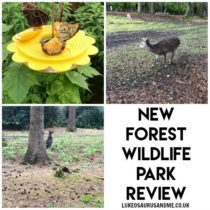 For my birthday a few weekends ago, Mikey took me camping in The New Forest. Whilst we got up to lots of things over the course of the weekend, the one plan I was really looking forward to was visiting the New Forest Wildlife Park in Hampshire.

There car park was free to use and very large! It wasn’t a particularly busy day for the wildlife park (it was a rainy April day) but the car park was huge and I doubt they run out of spaces often, even during busy peak visiting times.

There is a large cafe situated outside the entrance/exit and also a toilet block opposite. The cafe served hot food as well as sandwiches, crisps, fruit and drinks. There was also a choice for children to “build a lunch box” by selecting foods from certain boxes – a fun way of feeding the kids by letting them choose their food and minimising waste. There was also (thankfully) a Costa coffee machine inside the cafe, which we were very grateful for after we had finished walking around the park.

As mentioned before, there are toilets outside the entrance to the New Forest Wildlife Park. These are the only toilets on site. However, once you have paid for your tickets, you are free to exit and enter the wildlife park as many times as you want, providing you can show your ticket as proof.

When purchasing your tickets, you’re given some brief information about the loo situation, the animals feeding times/keeper’s talks and you’re given a map of the park.

The New Forest Wildlife Park hosts a wide variety of animals, especially for a park of it’s size. While you could spend a few hours looking around here, it doesn’t compare to the size of local zoos.

I found the wildlife park to be charming and the enclosures the animals had were so amazing compared to those you see at zoos. It really makes you think about how we sometimes use animals as a form of entertainment and label it under the term “conservation”. Comparing the enclosures of a place that prides itself on it’s passion for conservation, to those enclosures that are often seen in zoos, the difference is really quite startling. The main difference being the lack of concrete and the increase of foliage!

Each enclosure at the New Forest Wildlife Park was tailored perfectly for the animals and they were filled with enriching toys, tunnels and a healthy variety of foods. Preserving the animal’s natural instincts is of top priority to the keepers at the park. The staff at the park are passionate about conservation and they want us to be passionate about it to. We stopped to watch the Eurasian Lynx, Munchkin, being fed by her keeper who gave a very informative 20 minute talk about the lynx’s status in the wild and their natural behaviour and hunting habits. The keeper also explained how they try to preserve natural instincts by occasionally hanging Munchkin’s food up high so she has to work for it. The keeper also mentioned that they’re never actually too sure on how much the lynx has eaten because anything that is silly enough to enter her enclosure (birds, mice etc) WILL get eaten.

Wondering around the park and seeing wallabies and deer roaming free is a beautiful sight. We saw deer running around at extraordinary speeds in an area so big that eventually we lost sight of them. We saw wallabies happily foraging for food, and although they are clearly used to the hustle and bustle of visitors, they weren’t hanging around us assuming that every human will provide them with food which was great to see.

Many of the animals at the park are on the IUCN endangered species Red List and the wildlife park does it’s best to help breed and conserve these animals for the future. One of the first animals you see upon entry is the giant otter; New Forest Wildlife Park were one of the first parks in the UK to send a captive-bred giant otter to an international breeding program abroad.

The signs outside the enclosures offer information about the animals and sadly, mostly tell the tale of threatened existence due to human intervention, such as hunting and gamekeepers. It was disheartening to read many of the sign posts and the animal’s stories, but I am happy that wildlife parks like this one exist and are able to create breeding programmes and pull together all over the world to introduce animals back into our countryside.

Over all, I had a wonderful afternoon exploring the New Forest Wildlife Park. There are so many animals to see that I haven’t already written about, my favourites being: the wolves, the European pine martin, the wild boar (there’s loads of information here about the symbolism of the wild boar through out history!) and all the other species of otter. Also, I cannot forget the fabulous tropical butterfly house which we spent absolutely ages in. It was a magical experience.

The New Forest Wildlife Park has an amazing tropical butterfly house. We spent ages in there. It does feel a bit strange being surrounded by swooping butterflies, it almost feels like one is going to land on you. There are butterflies of all different sizes and the colours are absolutely beautiful. I’d definitely recommend a visit to the Wildlife Park if you’re in or around Ashurst. ☺️