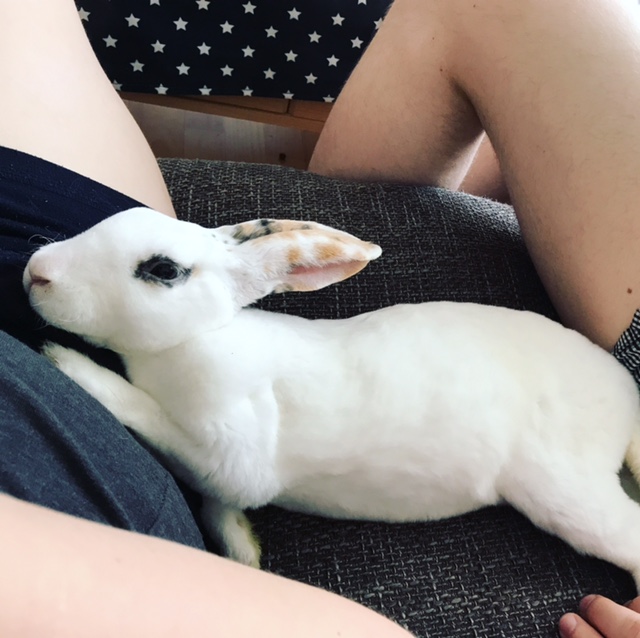 Yes I am the crazy house rabbit lady! There’s absolutely no going back. I’ve been sucked into the world of being a bunny mummy and I absolutely blooming love it! Huxley is our beautiful house rabbit that we have had since 26th March 2017. We got him when he was roughly 4 months old, but sadly we don’t know his actual date of birth.

I hope you’re ready for some house rabbit picture spam!

We actually collected Huxley on Mother’s Day, which was pretty lovely as I have previously written about how Mother’s Day really sucks for me. This was a lovely way to bring some cheer to an otherwise miserable day.

Huxley is now such a huge part of our lives. In fact, I’ve mentioned him so many time in various blog posts before, like when I said I gave up my dream of having a dining table and got a rabbit instead, or when I wrote about having a huge run for Huxley to play in when writing about my dream garden, that I thought it was about time the poor boy had a proper introduction. Not forgetting my constant house rabbit spam on Instagram.

Huxley is a beautiful white Rex rabbit. His fur is gorgeously soft and plush. Rex rabbits have a dense and luxurious coat on them, so they were bred in France to take advantage of this beautifully soft fur gene. The Rex breed was first shown in Paris in 1925 and has been recognised as a standard breed since 1925; the Rex breed quickly became one of the most popular breeds of domesticated rabbits. Their fur is velvety and dense and Rex rabbits tend to have short, curly whiskers – some don’t have any whiskers at all!

Huxley is mainly white, with little flecks of brown on his ears and black circles around his eyes. All the vets he has seen for vaccinations and check ups have commented on his “eyeliner” and his beautiful soft coat.

To sum up his appearance: he’s wonderfully soft and squishy.

Rex rabbits are known naturally for their gentle and loving temperament. The Rex is supposedly one of the most intelligent breeds of rabbits, and due to their strong maternal instincts, Rex’s are sometimes used to foster rejected kits. At some point in the future, we’d like to get Huxley a lady friend and I may consider another Rex as they do live nicely together. All that depends on what’s around at all the RSPCA adoption centres, however, as we are planning on rescuing rabbit number 2.

Huxley loves his human company and is a very cuddly little bunny. He gets on really well with Luke (3 years old) and sometimes will even flop down next to him on the sofa. Rabbits aren’t usually cuddly animals, so I think we got really lucky with our bunny. He will lick you arms, legs, neck, chest and, if he’s given the opportunity, he will also lick your face. At first I was slightly concerned he was going to bite me, but it turns out that rabbits lick for affection and not salt, so unless my arms taste like carrot, he’s unlikely to ever bite. He is even super loving when he’s at the vets too!

Huxley is, as I have mentioned, a house rabbit. That means that he has a nice big indoors hutch in my living room which he lives in during the night and whenever no body is at home. For the rest of the time, he’s roaming around the living room and the kitchen. We have plans to expand his exploration space to the corridor too, but we are still in the process of rabbit proofing. Rabbits are quite keen on chewing cables! So we need to cover all that stuff up before he can explore further.

He does have a huge amount of space to play in at the moment though, the corridor is just an added extra!

Before getting Huxley, we put in a lot of hours researching the costs and needs associated with keeping a rabbit. They’re not like other small animals, and there are considerable extra costs that come with a rabbit – it’s more like having a tiny puppy than a hamster. They have veterinary needs, which of course cost money, as well as the need for pet insurance as rabbits do live for a very long time (some for 10-12 years) and treatment for illnesses can be extremely costly.

As I mentioned earlier, Huxley has become a huge part of my life and is a very well loved member of our family. He’s a bit like a puppy dog; he licks and kisses you, follows you around and plays with you. As I type this, he’s currently snoozing next to me and it is utterly adorable. Unfortunately, it’s summer and there’s now white bunny fur all over my laptop (he usually doesn’t moult, but you can’t blame them in summer, can you?), but I don’t mind at all. Having Hux in our life has really added something special and we would never change our minds or wonder if getting a rabbit was the right choice for us – it definitely was! I hope Huxley is with us for a long time and lives a happy life!

As you can see, he’s our best friend. He loves cuddles and kisses and I love him to the moon and back.