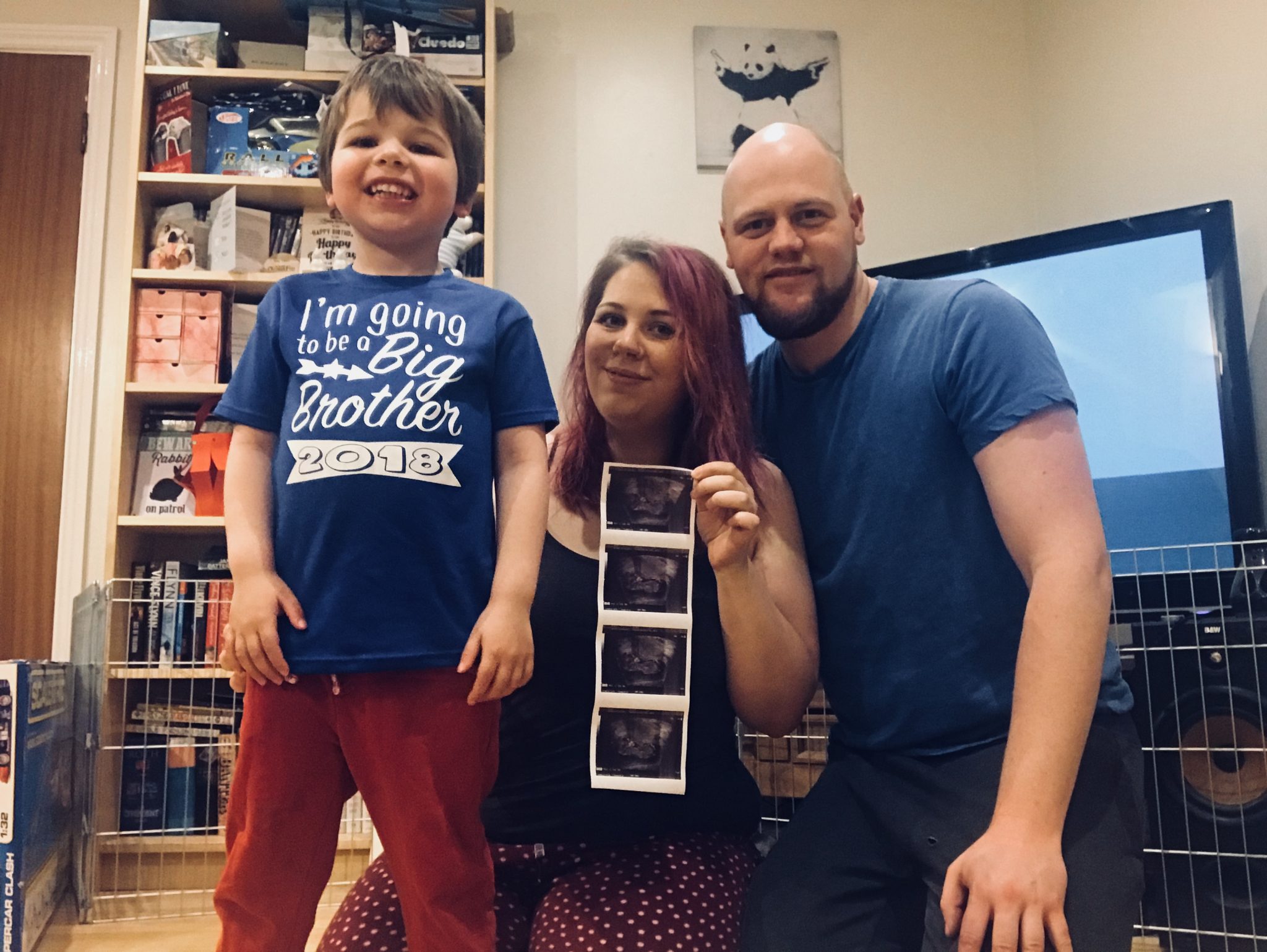 I am finally able to announce that I am pregnant! Woohoo!

It has taken me a really long time to get to this stage of the pregnancy. The stage where I can finally share my news and actually feel excited and positive about it. If you’ve been on my Instagram or on Facebook, you may have seen the following photo of my little family.

Gorgeous isn’t it? Luke look so, so excited and happy. He can’t wait to be a big brother! I’m using my first ultrasound scan pictures to hide as much of my body as possible and Mikey is trying to concentrate to telling Luke to smile at the right time… It was all a bit of a faff, but I love it nonetheless. Everyone looks happy and excited right?

I suppose most people will wonder why I said it took me a long time to feel excited and positive about Baby Number 2. Let me tell you why: Hyperemesis gravidarum (HG).

I’m not going to harp on about this too much, mainly because I plan to do another separate post because it really is a mammoth of a condition. For some people, being pregnant comes with horrible mental and physical pain.

HG is the absolute worst thing I have ever experienced. I genuinely thought I was dying and I would never wish it upon my worst enemy.

Imagine not only feeling sick, but actually physically being sick. 24/7. You can’t eat anything. You can’t drink – one sip of water and suddenly your head’s in a bucket. There’s nothing to throw up except your insides, you’re dehydrated, your body is starving itself, your skin is grey and you’re basically on death’s door.

I struggle to comprehend the seriousness of this condition. Without the wonders of modern medicine, me, and millions of other expectant mothers, would have died from dehydration.

My HG has only recently let up enough for me to drink (although I do struggle a bit with that still), eat and actually stand up. Yep, standing up without feeling incredibly dizzy or passing out is a real thing that people should celebrate in their day to day lives!

All I’m going to say for now is: HG makes you realise how much you take for granted.

Luke’s Going To Be A Big Brother

Now that all three of us are on the same page when it comes to excitement, we couldn’t wait to show Luke the ultrasound photos of his little brother or sister.

Of course, we had to get him a special t-shirt to mark the occasion. After all, it’s not every day you become a big brother! I spent ages switching tabs on my phone trying to find a t-shirt he’d actually like. I had eBay open, Amazon on the go and I even looked at places like Zara and ASOS. In the end, we eventually found one on eBay. I just wish I had thought about customizable t-shirt designers, like Printsome, who do wholesale T-shirt printing and other bits and bobs too. It would have been so much easier to just chose the words and style ourselves, rather than faffing over so many apps and Safari tabs!

Luke is absolutely desperate for a little sister! I’m not sure how he is going to react if we end up having a boy. I can picture a few strops and a rather dramatic, “It’s not fair!”. That does seem to be his favourite saying at the moment!

As well as being picky about whether he wants a little sister or a little brother, Luke is also rather critical of the names that Mikey and I have chosen for Baby Number 2. Let’s just say that he isn’t the biggest fan of either of them, and he would much rather name the baby ‘Margaret’.

Becoming A Family Of Four

This will be Mikey’s first child and Luke’s first sibling. It’s safe to say that both boys are over the moon and I can’t wait for us to become a family of four!

Mikey is going to be the best dad ever. He’s already the best step-dad I could ever wish for. The bond him and Luke share is unbreakable and I know that becoming a family of four is going to be the most amazing thing to happen to us. Now that my HG is less severe, I have finally allowed myself to get excited and have a little wonder through Mothercare on the way back from the school run. Mikey and I may have even bought a cheeky first outfit…

With Mikey being a first time dad, his excitement is beginning to rub off on me. Every step is incredibly special and exciting to him and having all this positivity around me is really refreshing and mood lifting.

Due to HG, I can’t imagine ever wanting to fall pregnant again, so this baby is really special to all of us.

It’s not just the HG either. My body is rubbish at being pregnant and I don’t really enjoy the experience. I have high blood pressure during pregnancy so have to take Aspirin daily and I can feel my hips start to ache on the way home from school. I’m hoping this doesn’t turn into SPD, as I had that with Luke and it was horrible. During Luke’s labour I discovered that my hips were just not made for birthing! I had two sweeps, my waters were broken for me, and I ended up with an epidural being topped up 6 times when I had to be induced. Finger’s crossed, Baby Number 2 comes into the world a little more peacefully.

Mikey thinks that one day I will change my mind and we will want to have another baby. I’ve got to say it though, for me, I am very happy sticking to just the two kiddiwinks.

Due to Mikey’s crazy first-time-parent excitement, I just can’t stop looking at cute baby bits and thinking about what I want to buy! It’s contagious and I can’t wait to share shopping hauls, baby toys, pregnancy updates and eventually reviews and maybe even a few videos.

We’re due in July, so I’m going to have another summer baby. Being pregnant in the summer requires lots of maxi dresses, so I’m also looking forward to doing a few cheeky maternity clothes hauls.

If you have any baby essentials, let me know! So much has changed since I had Luke in 2013…!

You can keep up to date with all my mad pregnancy spam over on Instagram – I’m a complete Instastory addict so feel free to reply to stories! You can keep an eye on the Family tab on my menu bar at the top for pregnancy related updates. If you like, you can also sign up to Lukeosaurus And Me using the box below to recieve updates straight to your mail box.