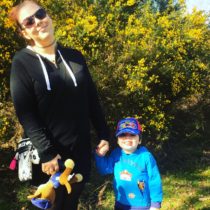 I’m going to jump right into Donna’s Living Arrows linky…just a few weeks later than planned! What with moving house and waiting for our internet to get reconnected (and having to deal with Virgin Media’s early exit fees), I wouldn’t have been able to keep up with one photo/one story every week. Now that things are a bit more settled, I think I’m ready for the weekly commitment!

This week Luke, his Aunty Sarah and I went for a walk along Caesar’s Camp, a big old hill fort area that straddles the boarders of Surrey and Hampshire. It’s used a lot by the military – Aldershot (Hampshire) being a military town, so while we were walking, we saw lots of Army Landrovers driving up and down the loose rocky hills. We like to call these hills “mountains” – they are VERY big when you’re only a little person.

Luke collected lots of rocks and stones and both him and his aunty kept their eyes peeled for fossils. Unfortunately, on this trip, the hunt was unsuccessful (but aunty Sarah did go home with pockets full of interesting shaped rocks).

We saw lots of cows too! Luke was un-phased, unlike his mummy. I grew up in Cornwall, so you’d think I’d be fine walking (literally) through a herd of cows, however, I have to admit I was a bit apprehensive. Even so, I took some pictures of cows, the country side and an awful lot of Luke.

I absolutely love all of the pictures I took (and I took a lot!) but these are my favourite three. You can pop over to my Instagram if you’re interested in seeing some wild cows though!