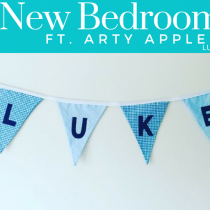 In case I hadn’t mentioned this enough when I complained about my lack of internet, or the sheer joy of finally getting to this stage, I have moved house recently. Yes! I know! A complete shock to you all, I’m sure. But seriously, after the stress of moving and living without internet (I really feel the need to hammer that point across to you), one of the best bits about our new home is Luke’s new bedroom.

For the first time ever, he actually has a room that is all his. Beforehand, our living arrangements meant that his bedroom was also our dumping ground and storage space. It was a big room, but only half of it was ever really accessible. There were no cool pictures or photos on the walls, no “special little touches” to make it his.

But now that’s all changed. Luke has the freedom to personalise his surroundings to his own taste, and so do I.

One of my favourite new touches to his bedroom is Luke’s Arty Apple bunting.

I’m not going to lie, there is a lot of “character” decor in Luke’s room, which he obviously adores. I mean, I defy you to show me a preschooler who doesn’t love Paw Patrol or Lightning McQueen.

But you know what? It’s really nice, as a parent, to have something in Luke’s room that looks classic and traditional.

I can handle all these crazy cartoon characters, but that doesn’t mean in my head I don’t long for my child’s bedroom to look a little bit like Christopher Robin’s!

Amy from Arty Apple contacted me just before we moved house and asked whether I would be up to reviewing some of their bunting. I browsed their website briefly before very happily agreeing and hoping their bunting would fulfil my er, bedroom fantasies.

My dream of having Luke’s bedroom look like AA Milne’s Christopher Robin’s bedroom went out the window pretty much as soon as I had a baby and realised how much “traditional looking” toys and furniture actually cost; then factor in that they’re actually quite difficult to find.

Arty Apple’s personalised bunting is very reasonably priced. As with any home made/personalised item, the cost does increase with the number of letter’s you request, but with charming home made items, you really do get what you pay for.

The beautiful bunting with Luke’s name on was sent to me in the cutest of packaging. The bunting was lovingly placed inside an Arty Apple embossed box and wrapped in tissue, held together with Arty Apple’s logo sticker, and arrived in a pink mail bag. The content was in pristine condition – it really was excellently packaged and impossible to damage. Plus it got delivered straight through my letter box – no trips to the post office the next day!

I went for Arty Apple’s “Classic Baby Boy Bunting“, although they do feature several beautiful styles. I then opted for the addition of stars on either side of his name. This is an optional extra and, as more fabric is being used, will bump the cost up slightly.

I have got to say that I am so pleased with the product that turned up. The bunting is beautifully and skilfully made, the stitching is perfect and the fabric feels soft and nice – it’s clear that good quality materials are used in the production process.

I’m so happy with it. It really adds that “special touch” to Luke’s room. He’s beyond happy about it too! We put it up while he was out for the day and when he came home and saw it he said “It’s my name!” and raved about it for days afterwards.

The bunting we received has been a massive hit and has brightened up Luke’s room immensely. I’m overjoyed to have something a bit more traditional in my little boy’s room that I know has been hand made with the same love and care that Amy uses for the products she makes for her own children. Luke is ecstatic to have his name in big bold letters above his bed, and he loves the stars. Overall, Arty Apple’s Baby Boy Bunting has been a huge success and has really added the special touch to Luke’s new bedroom.

*I was sent bunting by Arty Apple for review purposes. All thoughts are my own.*

Pin It For Later: