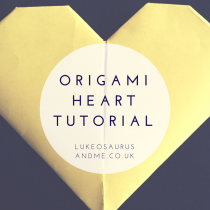 Right back at the beginning for the year, I read a book series called The Paper Magician. Almost everything about the book aside, the main character’s used paper to create their spells, and at one point in the story line, the magician’s apprentice is required to make a paper heart. Essentially, origami plays a huge role in the story line.

I absolutely loved the book series and it really did open my eyes to the whole new creative process with this rather under appreciated medium. I decided that I had to give origami a go. It’s something that looks a lot more complicated than it actually is. With a few creases and folds here and there, you’re left with a beautiful little creation that didn’t take anywhere nears as long to create as you expected. After the first two origami hearts I made, I’ve been able to bang them out in under five minutes each. Here’s a step by step guide on how to do it.

How To Make Origami Hearts – Step By Step Guide

First thing’s first, you’ll need some paper. For this tutorial, I used standard coloured paper, but I highly recommend using origami paper, like this paper here

, as it’s thinner and easier to fold and it also comes in a range of beautiful patterns and colours. Also, there’s the really obvious reason: it’s already square, which means no measuring or cutting!

Grab your origami paper! Fold your square piece of paper from left to right and make a fold, then fold from the bottom edge to the top. When the paper lies flat, you’ll be left with a square of paper with two folds in it, where the folds meet will be the middle of the piece of paper. It should look like the second image below.

Take the bottom edge of your origami paper and fold it up towards the middle fold in your paper, then make the crease. It will look like the third picture below.

Once you’ve made your fold, turn over your piece of paper so that all the fold you just made are facing the work surface, as shown in picture number four.

As if you were making a paper aeroplane, take the bottom left corner of the origami paper and fold it towards the centre crease.  Then do the same with the bottom right corner. The two folds should meet in the middle a produce the aeroplane like shape shown in the first picture below. Then turn the origami heart over, so everything that was facing you is now facing the work surface.

Now take the top left edge of the origami paper and bring it over so that it sits perfectly with the crease running vertically down the middle of the paper. Do the same with the right edge, it should then look like the second picture below. The folds should all line up as perfectly as you can get them too – this does take some practice, so don’t worry too much – you’ll get better at it quickly.

Fold the top left corner down so that the corner meets the bottom right corner if the little square shape you have. This should leave you with a diagonal fold. Do the same with the right side as shown in the third picture below. Press the folds down hard to make sure they’re secure.

You now have something that looks a bit like a diamond, with a triangle shape at the top and bottom and vertical edges in the middle. Without making a fold, gently fold the paper in half so that the two triangles meet and line up. You’ll notice there are flaps left, like the ones pictured in the fourth photo. In order for your origami heart to sit flat, you need to press along the seem that these flaps create – this helps the two triangles connected.

You’ll notice that there’s a little triangler pocket on the bottom layer of paper when you pull the top and bottom triangles apart. All you need to do is slide the top triangle into this little pocket, like the first picture below. You can see the heart shape is starting to take place.

Flatten the flaps like shown in the second picture below.

You can see that you’re left with a single square shape of paper. Fold the left corner to the bottom right corner of the square to create a diagonal and then do the same on the other side. You’ll have two pointy bits at the top of the origami paper, gently fold these down about 1/3 of the way and flip over your paper.

There you have it, your finished origami heart – well done!

If you’re still a bit confused or you’ve got a bit stuck along the way, here’s a quick video to show you how it’s done.

If you used plain coloured origami paper, how about decorating with some colourful patterned washi tape

, or some cute vintage stickers

. You could even use washi tape to secure a wooden skewer or cocktail stick to the back (depending on what size you make) and use them as cake toppers.

Other Posts You May Also Enjoy:

DIY Watering Can For Toddlers

How To: Origami Hearts Tutorial