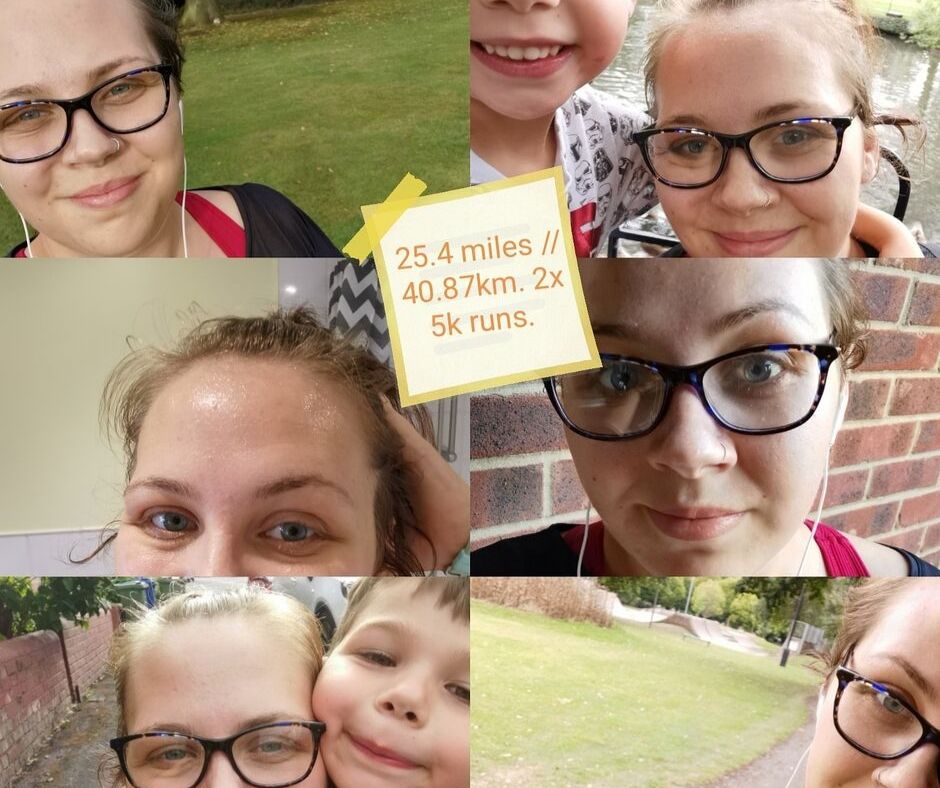 It’s the beginning of October now and so I thought that it was about time I got back into talking about my health and fitness journey. I last posted a fitness update few months ago called Month 1 Of My Fitness Journey where I mentioned that I had started running as well as doing HIIT workouts. Alongside the additional exercise I was also counting my calories to help me lose roughly 1.5lb a week.

That post was published on July 17th 2019 and since then a lot of things have changed and I’ve altered routines and strategies to suit my lifestyle better. So here’s a little update about what’s happened since mid July, featuring the highs and the lows (and a lot of filter/make up free selfies)!

August Wasn’t Such A Good Month.

Firstly, I feel it’s important to mention that the month after I published my initial fitness post wasn’t quite as positive. It was the beginning of the summer holidays which ultimately meant I ate a lot of food and didn’t do a lot of exercise. The summer holidays were fun, but I definitely didn’t stick to any form of diet and the “holiday mode” well and truly set in. We had an amazing 6 weeks, but there wasn’t much running going on. By the end of the summer, I felt pretty deflated and useless…I needed to get back into running!

Starting to run again after a month long break.

I was quite scared about my first run after a few weeks of no exercise. I was expecting to be completely out of breath and for my legs to give up on me, leaving my brain to fight my body at every turn. Ultimately, I thought I was going to have to start the whole process again and, very depressingly, go back to the beginning of Couch To 5K.

However, I was determined to make September better than August.

A few people were around to encourage me and I was eventually persuaded to get my gear on and head out the door. I went back a week on the C25K app so that I was running a programme I already knew I was capable of, and I completed the week far more easily than I’d expected. I thought I’d have lost any fitness that I’d built up, so I was so surprised to find that it wasn’t too much of a struggle. I managed to get myself back into running and I was determined to make September a great month.

I signed up for the Race At Your Pace September virtual challenge and set my running goal to 15 miles. I know that is a tiny goal for most runners, but for me that was something to work towards – especially as I was completing Couch To 5K and wasn’t sure quite how many miles that would rack up.

It turns out that, in the end, I didn’t really stick to my Couch To 5K training and started to do a few free running sessions as well. If it wasn’t a “run” day, then I would at least get a little 1K run around the block in – every little helped me on the way to getting those miles up!

Short daily runs – gotta get the miles in!

I have seen that a lot of the runners I follow on my Fitness Instagram Account do long runs and then fill in their “days off” with short 1 or 2K runs. So that’s what I decided to do too! My C25K days were “run days” and on the other days, I’d do a little run around the block to help keep me on track for my challenge. It also meant that I could fit in a bit of exercise, even on my most hectic days as it was just 10 minutes of my life.

During September I did a lot of free running.

I ran loops around parks frequently and got used to some elevation. Eventually I started to conquer different terrains and I planned my roots in a loop. I even managed to get in a couple of 5K runs in which I thought were very slow, but looking at the average C25K graduate’s run, it doesn’t look like my time is too bad at all.

I ended up focusing a lot of free running and getting the miles in. In October I want to change this and I want to start really focusing on completing the Couch To 5K training program.

Half way through the month and I’d smashed my goal.

In the first 2 weeks of September I was able to fit my running in really easily. Even if I didn’t have time to complete a C25K run, my sister was around and able to baby sit so I could at least go out for 20 minutes. It meant I could fit lunch runs in, rather than having to go running in the evenings when I was always tired and grumpy.

2 weeks into September and I’d managed to hit my 15 mile goal quite comfortably. I decided to up my goal to 25 miles; I thought that would be really easy and I’d get it all done – maybe even go further – however, I didn’t factor in what came next.

I decided that I’d go on a nice to 3k run with Luke. He was a bit more eager than I was to go running and instead of having a 5 minute walk to warm up, he wanted to go straight into it. By the end of that run my shins were absolutely killing me. After asking around on my @raygetsfiit Instagram account and on my personal Facebook page, I was told to rest, stretch and use hot and cold compresses.

I was on a roll, resting was not what I wanted to do! I rested for about 4 days before I decided to go on a run…that was a huge mistake! It turns out when someone says rest for a couple of weeks, they do indeed mean weeks.

During this time my one-year-old also got pretty poorly.

He was teething really badly, he had fever then he came out with a full body rash. He was pretty unhappy and demanded a lot of attention, so by the time Mikey was home from work, I was way too exhausted to even think about running. So this, combined with the shin splints, meant that I was pretty much out of action for the last two weeks of September.

I didn’t think I was going to finish the challenge.

When I talked to my sister about how upset I was that I wouldn’t be able to finish it, she said that she would look after the kids if I wanted to go for a little run that afternoon. I decided that since I hadn’t been running for a while, I’d just do one or two kilometres around the park… but that 1 or 2k run turned out to be my second 5K run, shaving 1:10 off my previous time.

With another a 3.1 miles down that ment I only had to run 2 miles which was definitely achievable in 3 days.

Reaching my goal and completing the Race At Your Pace September challenge.

I was really thrilled to reach my goal and I think I told absolutely everybody about it! I know that 25 miles is level 0 for runners, but for me, it’s a huge achievement and I am so proud of myself. I was skeptical about even running 15 miles, so the fact that I managed to add another 10 miles of running on top of that is really exciting! I’m so happy that I pushed myself on those last few days, it was hard work after my random 5k, but it was so worth it!

I have written a whole new blog post on my October Fitness Goals because they differ slightly from September’s aims. The gist of it though is that I want to concentrate more the Couch To 5K training program so that I can run for longer amounts of time. Basically I’m aiming to be able to run for longer, which in turn will mean that I cover a greater distance in the same amount of time.