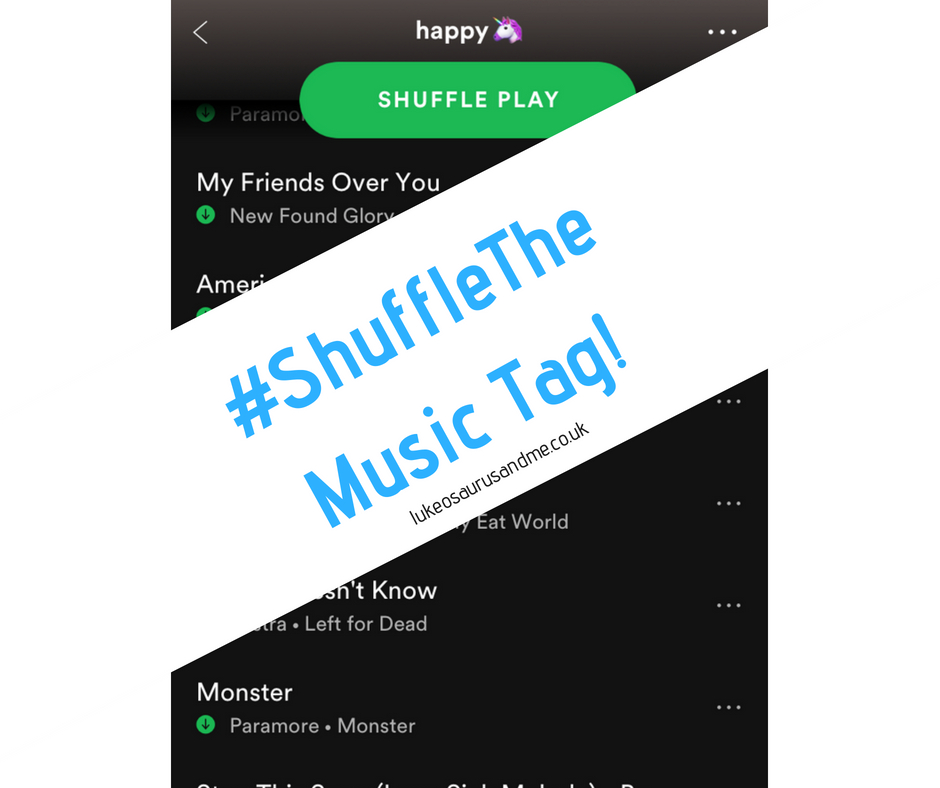 Both Mikey and I are into whacking either an epic playlist or Radio X on at almost any given time. We have a sound system in the living room, the bedroom and a Bluetooth speaker in the kitchen. He’s also one of those petrol heads with a massive sub in the boot of his car. It’s safe to say, we listen to music a lot and it’s part of our daily lives; whether we’re driving to the shop, doing the washing up or eating a nice Sunday breakfast.

I was tagged by Rachel from Coffee, Cake, Kids to do this music shuffle challenge. All you do is put your main playlist on shuffle and write about the first 15 tracks that come on. I’m a little apprehensive because, at heart, I’m still a little emo kid and almost all the music I listen to is about 15 years old or extremely cheesy. That being said, it seemed like a really fun and interesting tag to take part in, so here goes!

So straight away we’ve dived into the angsty emo teenage years! The album Brand New Eyes always reminds me of the limbo moment of my life when I moved away from Cornwall and up to Surrey. It wasn’t a move I wanted and I felt helpless having found myself in a very complicated and unpleasant situation. All of the songs on this album remind me of singing these songs with my friends in Cornwall and doing that cool teenager-y thing where you write song lyrics all over your converse.

It’s just a really fun song to sing along to, if not slightly R rated. Definitely not one to listen to in front of Luke! My boyfriend is a huge Eminem fan so we frequently have a good D12/Eminem sing-along.

My Friends Over You – New Found Glory

Could you be a teenager in the Noughties without having a bit of New Found Glory on your iPod (or Sony Walkman if you were poor like men)? It’s another one to sing along to, especially during the summer when you’re in the car!

She Hates Me – Puddle Of Mudd

I never used to listen to Puddle Of Mud but I found this song on one of the Teenage Dirtbag albums and fell in love. Again, it’s another great one to blast when you’re in the car, but not in front of the kids.

The Tears – Robots In Disguise

Back in the day, I was a huge Mighty Boosh fan. Nope, scrap that, I still am. Anyway, Noel Fielding’s girlfriend way back then was in a band with another woman called Robots In Disguise. Trashy electro, lots of swearing and a lot of screaming and squeaking. Think Peaches mixed with Scream Club with a lot of Britain/Europe references.

Aw this song is special to me! Believe it or not, this is actually me and my boyfriend’s ‘song’. We do romance well, clearly. It all started when we were in the texting stage, talking about what sort of music we liked. I thought I was being a right weirdo by saying I was a huge punk pop fan but also loved a good bit of 90’s hip hop. Amazingly, he said that he was exactly the same and said he’d love to hear my rendition of Mama Said Knock You Out. Well, safe you say he has many times!

Burn It Down – Linkin Park

If you never liked a single Linkin Park song, I’m not sure we can be friends. Like most people my age, Linkin Park got me through the tough angsty teenage phase. However, since Chester Bennington’s death, I’ve completely changed the way I listen to their songs. Orignally, they got me through my superficial angst, but now, I hear them as powerful, emotional and strong songs. Burn It Down also happens to be a great song to power walk to, so I usually listen to it on the school run.

Face Down – The Red Jumpsuit Apparatus

An emotional song that is fondly referred to by 20 something-year-olds as the ‘domestic abuse song’. To put it very simply and vaguely, this song means a lot to me and was all part of my ‘epiphany’ moment.

I Write Sins Not Tragedies – Panic! At The Disco

Ah, to be 15 again! This song was on Kerrang and Scuzz all the time, it’s impossible to forget the music video. Brendon Urie is a god. His voice is amazing, his lyrics are ridiculously clever and he’s not bad on the eye either! A classic road trip song.

A pretty accurate depiction of society, both when it was released and today.

One of my old friends got me into Barenaked Ladies and I never looked back. I still haven’t learnt the lyrics to this song, despite it being 20 years old.

This song is just so nice! I think Kate puts what we’ve all felt into simple words that everyone can relate to.

Wow, a song that is from this decade! To be honest, I think this song is awful but strangely addictive. JT could come out with any rubbish and I’d still listen to it.

An absolute classic that now reminds me of Deadpool whenever I hear it. It’s just a ridiculously fun song to sing to and makes a great summer road trip song!

I’m part of that trashy generation that spent their youth sat in car parks in the middle of the night listening to Tinie Tempah and any other artist that sounded half decent coming out of a sub. I think this came out a little after I stopped doing that, but my love for Mr Tempah has stuck and he’s not a part of me. Mosh Pit features a healthy dose Dizzee Rascal and I totally used to listen to this as part of my work out routine before I got pregnant.

Well, that wasn’t as embarrassing as I thought it was going to be!

My seven tags are: Karen from Our Irish Family, Gail from Yammy Mommy, Karina from Mum’s The Nerd, Mark from Big Man In The Woods, Maria from Happy Mummy, Vikki from Mum Times Two and Charlotte from The Mummy Toolbox.