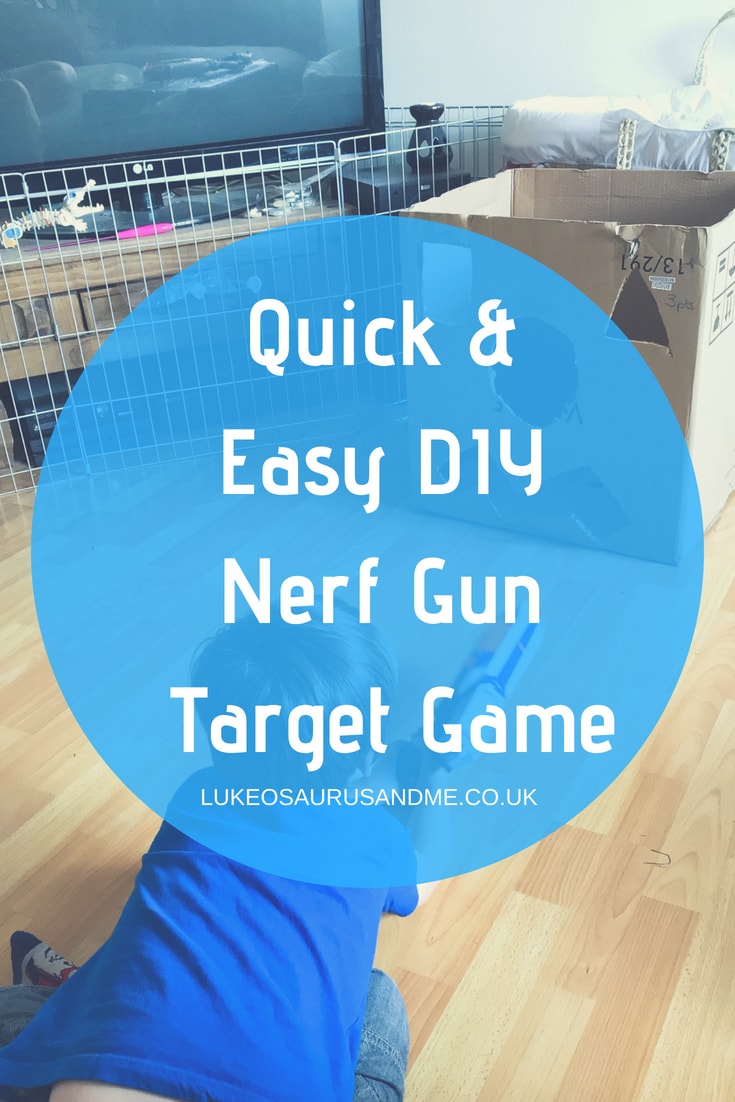 We’ve had Nerf Guns floating around our house for ages now. Being the childish ‘adult’ that I am, I actually bought me and my boyfriend some when we first started dating. We used to run around the house trying to shoot each other. True love, that! At the time, Luke was only 2 so although he was interested in the guns, he wasn’t able to use them properly.

Fast forward a few years and we have acquired even more Nerf Guns. In fact, we now how quite the collection that we just don’t know where to keep them! Storage is tight what with Baby Number 2 on the way so at the moment they’re hidden on top of a wardrobe where Luke can’t reach them!

Luke’s just started to get the hang of loading and cocking the Nerf Guns, which means he’s a lot keener to play with them now. What with being 9 months pregnant and Mikey being at work 12 hours a day, I decided I needed to put something together so that he could play by himself, as I definitely don’t have the energy to chase him any more.

Luke’s four, nearly five, so I have kept things really simple for him.

I grabbed a big cardboard box and cut the top off, as well as cutting some shapes into the front using a knife. I let him choose which shapes he wanted and we talked about how many points each target hole should be worth. I marked up the points using a marker pen and then sent him to the other side of the room with a loaded Nerf Gun. Simple!

This is a really easy game for kids to play! Simply load up your gun, aim and fire.

During the game, Luke’s aiming improved significantly as he worked out how high to aim the Nerf Gun and worked his way around the targets. We also wrote down his scores each time he got a bullet through a hole and together we worked on adding the scores up to find out his total. He was pretty pleased to watch his total go up.

Other Ways To Play

For older children, you could set them a target score to reach or perhaps see how many points they could score within a set time limit.

You could also experiment with different shaped and different sized holes, as well as using different varieties of Nerf Guns.