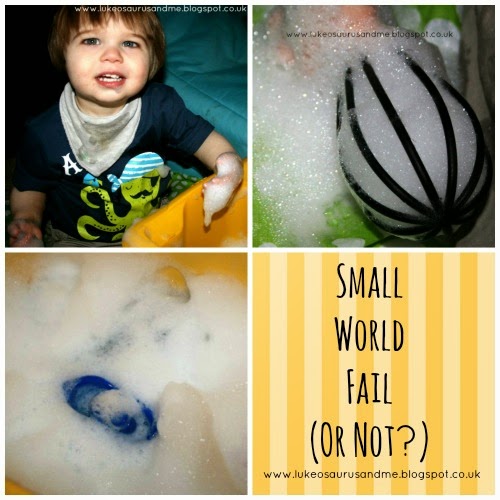 Hello lovelies, I have the second edition of “It’s The Little Things” for you today. My own little collection of heart melting things Luke does and how they make me feeling so squishy.
In my head, I had a beautiful vision. Images of perfectly composed photographs from Pinterest filled my head. Beautiful educational “small worlds”, lovingly created by parents and child minders alike. Gleeful grins on toddlers faces as they play for hours in these little worlds, telling stories, learning, experiencing new and fun textures. Yes. I was going to make Lukeosaurus and magical small world and it was going to be amazing.
Not if Luke had anything to do with it.
I got as far as filling a box with barely and inch of water and dolloping in a hefty gloop of gel food dye before he appeared at my feet. “I’m making you something really fun to play with!” I said to him. His response?
“Uhhh!”
I looked down, he didn’t give a rats arse about what I was doing. He was reaching out and pointing to the bottle of washing up liquid. “Uhhh!!” he said, this time far more enthusiastically than before.
Now, previously Luke and I have played with sensory foam and loved it (you can see our post about it here). But I had too much water in the storage box and quite frankly – I wanted to make a blooming mini sea world! But begrudgingly, I gave in a squirted some washing liquid into the water and whisked it up.
What happened next was this – the gleeful grin. Bubble joy!
Luke went mad on the stuff and was far too impatient to wait for me to add any toys or scoops into the mix. No small world for me Luke. Somewhere, buried under bubbles, was the plastic 50p whisk I picked up years ago and have subsequently decided that, if you want a whisk that will help you prepare any decent food, spend more than 50p. It does, however, make a wonderful toddler toy. He picked it up and marveled at all the bubbles filling the middle, then decided to whisk some more.

He moved on to picking piles of bubbles up in his hands and blowing into them – something we do a lot in bath time. He also splashed about briefly, before deciding it was much more fun to “paint” my bare legs with them (wearing shorts in this weather? It was indoors, okay?…) This is apparently hilarious.
Then, something magical happened, people! He disappeared and I thought, well that lasted long! I heard him crashing around in the bathroom and mentally sighed at this mornings cleaning session. But then, he appeared! In his hands, a blue basket full of bath time toys.

Suddenly the box was awash with boats, ducks and squirty ocean toys. My boy had made his OWN small world! How clever! He didn’t bother putting his letter building blocks in, or anything really that wasn’t to do with water. I have no idea how he knows this, maybe (most likely) it was just a huge coincidence, but I was very impressed.
He chucked in his ocean themed squirty toys, some boats and a few ducks. Also a foamy crocodile to add some drama. He had great fun fishing through all the bubbles trying to find the toys that had sunk, whisking all the toys together (not such a silly purchase now!) and skimming the boats along the tops of the bubbles like they were waves. All with wonderful sound effects.
I must say, I was very impressed. I added some scoops to the mix towards the end of play too, but that resulted in bubbles being deposited in various places around the living room.
Over all, what I expected to be a tragic fail, turned out to be amazing fun for us both and kept Luke busy for at least 45 minutes!
So that is what I call a success! Not quite what I had planned, but it turned out pretty well in the end. Has anyone else had any toddler activity fails? Let me know in the comments!

Small World Fail (Or Not?)