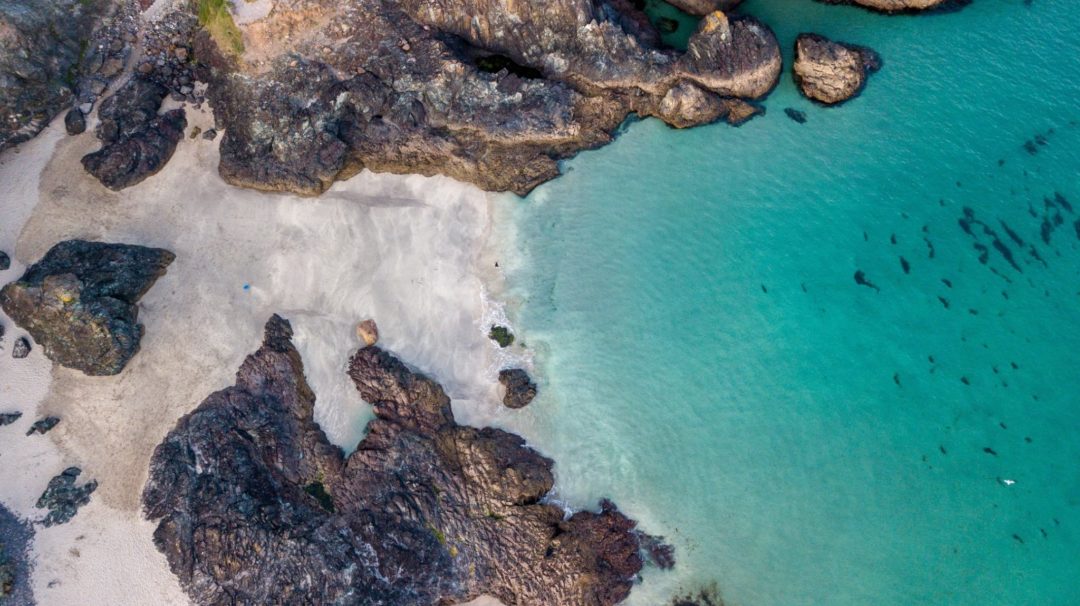 This summer, we’ll be packing up the car and driving down to Cornwall for our family holiday. We’re staying in Mullion, which is in the Lizard Peninsula – an absolutely gorgeous part of the Cornish countryside. Just two miles north of the infamous Lizard Point is a beach like none other you’ll find in the UK: Kynance Cove.

You’ve probably seen images of Kynance Cove crop up on your social media feeds, especially during the summer months – that’s because it’s a truly stunning part of England. Dubbed the most photographed, filmed and painted beach in Cornwall, it’s views are simply breathtaking. Looking at the crystal clear waters, white sand and rocky stacks, it’s hard to believe that this beach is in the UK rather than in a tropical far off land. Visiting Kynance Cove is a must, and I really think that it should be on everyone’s travel bucket list, but you’ll need to plan your trip carefully.

With beauty comes popularity, which means planning your trip to Kynance Cove is essential if you want to make the most of your day on the beach. Here are my tips for visiting Kynance Cove and getting the most out of your visit to the famous Cornish beach.

Arrive early in the morning.

During the summer months, Kynance Coves car park fills up very, very quickly. If you want to guarantee your spot on the beach, you need to arrive early in the morning and park up. If you miss out on the National Trust car park, the next nearest area you can safely park your car is in Lizard village, which is about 2 miles away. It’s worth remembering that the beach is owned by the National Trust, so to use the car park you will need to pay, unless you’re a National Trust member.

There are toilets and a cafe open during summer.

The toilets are open seasonally, which means during summer the toilets in the car park will be open, but during the winter they’re closed. Kynance Cove has a lovely little cafe situated at the top of the cliffs. It’s stocked up with tasty cakes, scones, sandwiches and drinks – including local beers. The outside seating area allows dogs and also has a covered area for those rainy days. Just image tucking into fresh Cornish scones while overlooking the awe inspiring beauty of Kynance Cove!

Although dogs are allowed in the outside seating area at the cafe, it’s important you know the rules for taking dogs on the beach. Kynance Cove has a seasonal dog ban, which means between Easter day and October 1st, no dogs are allowed on the beach. Throughout the winter, however, you’re free to walk and play with your pups on the glorious sandy shores.

Getting from the car park to the beach.

There are two paths that lead down to the beach itself. There is a steep and uneven path from the car park which takes you down to the beach and takes about 10 minutes. Before you can get to the sand, you also need to work your way across some big pebbles. There is no sand during high tide, so if you’re planning on building sand castles, make sure you plan your trip by checking when low tide is. If the tide is in, or you’ve got mobility problems/a pushchair/just fancy a longer walk to soak in the view, there’s a slightly longer but flatter route down to the beach.

Can you swim at Kynance Cove?

There are several warnings dotted around the beach as Kynance Cove, along with most a lot of Cornish coastlines, experiences rip currents. If you’re planning on swimming in the sea, especially with children, learning about rip currents is really important. This article from the Evening Standard explains what a rip tide is and how to spot one from the beach.

The main safety issue to take into account at Kynance Cove is that when the tide is coming in, the beach disappears very quickly. Don’t be put off from swimming in this idyllic location though. Whenever you’re wild swimming you should exercise caution. Kynance Cove does not have any life guards and there’s limited phone signal so be aware of what the tide is doing while you’re having fun.

What can I do once I’m at Kynance Cove?

Besides taking in the breathtaking view, getting your swimwear on and heading into the crystal clear waters for a dip, there’s also exploring to do!

Low tide at Kynance Cove reveals a series of fun caves to explore, all with old fashioned Victorian names like ‘Ladies Bathing Pool’ and ‘The Drawing Room’. There are stacks of rocks littering the beach, one rock is named after Prince Albert who came ashore Kynance Cove with his children in 1846. Asparagus Island is so named after the native asparagus plant that naturally grows there.

I can’t wait to take my boys here and explore the cave formations and swim in the infamous Kynance Cove waters! The views are simply breath taking, so it doesn’t surprise me that it’s famed for being such a romantic setting. Have you ever been to Kynance Cove? Do you have any tips to add?

Day Tripping To The Isle Of Wight

Luxury Family Holidays On A Budget

Tips For Planning A Trip To Kynance Cove, Cornwall