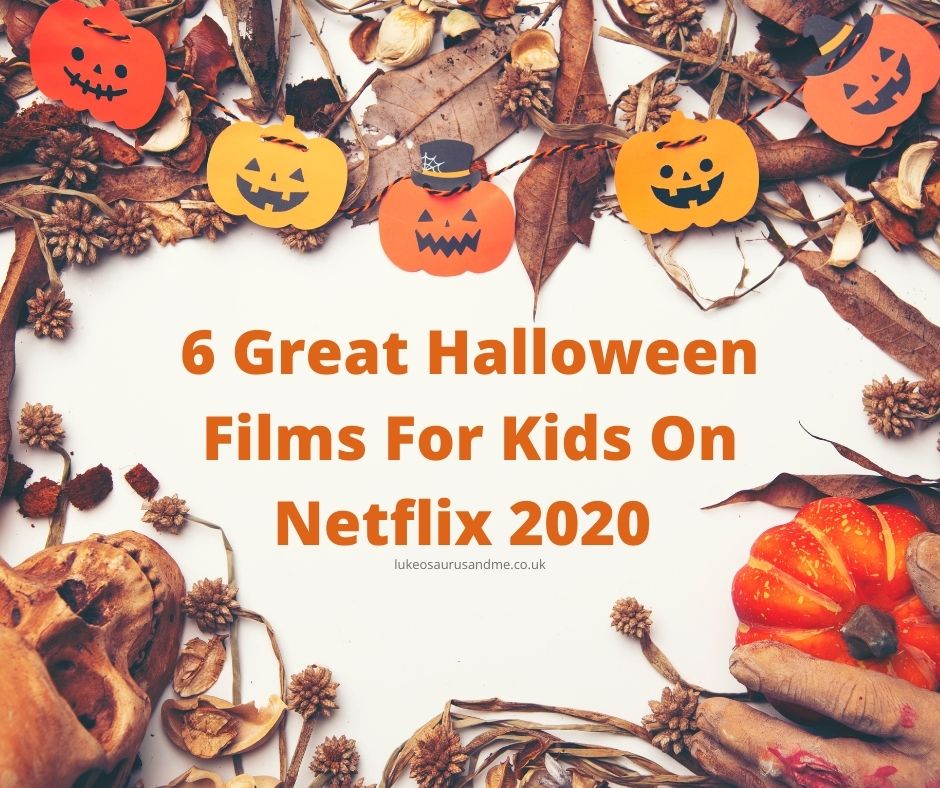 Halloween will be very different this year. With little or no trick or treating, you might be wondering what else you could do on Halloween evening? Or maybe you’re stumped as to what you can do this half term (except make your own Halloween decorations!) to keep the children entertained, after all it is looking like it might be a bit of a wet one! Fortunately, Netflix has a great selection of spooky, family friendly films that are suitable for children of all ages.

I have a 7 year old and a 2 year old, both of whom are embarrassingly capable of navigating their way around the Netflix menu screens. We have been watching some of Netflix’s finest Halloween films for kids after school, getting ourselves into the mood for some spooky Halloween going ons.

True horror fans will likely enjoy my binge worthy adult horror shows on Netflix blog post, but for the littles, here are some of the best Halloween films for kids on Netflix 2020!

Count Dracula owns and runs Hotel Transylvania – a hotel specifically hidden away to keep the human’s at bay – it is a safe space for monsters big and small to relax in. One day, Dracula invites some of the most famous monsters around to come to Hotel Transylvania to celebrate the 118th birthday of his daughter, Mavis. Typically, Mavis looks and acts like an 18 year old. The human-free hotel soon gets an uninvited visitor, by the way of 21 year old traveller, Jonathan. Dracula is left to do everything he can to prevent the two from falling in love and potentially ruining the hotel’s reputation for being a human-free safe haven.

An all round crowd pleaser, rated U. Safe for children of all ages to watch and really is a great halloween film for kids.

Super Monsters Save Halloween (U)

If you’re not familiar with Super Monsters, let me introduce you to the world’s most famous monster’s…preschool aged kids! In Super Monsters Save Halloween, the Super Monsters help their neighbour to get into the Halloween spirit, whilst also helping their fearful friend learn that Halloween is nothing to be scared of.

Rated U, this short film is great for preschool aged children, and my 2 year loved it. It was short enough to hold his attention and the story was easy to follow, making it a really good Halloween film for kids.

Think Paw Patrol, but with ghosts. Two kids, Gabi and Spence, along with their dog, make up the “Ghost Patrol” – a team dedicated to photographing and documenting paranormal encounters. Their goal is to make non-believers see that ghosts really do exist. There’s only one problem…they haven’t actually seen a real life ghost…until now. The Ghost Patrol gets a call to investigate an old, spooky manor and they soon find out that it is haunted by real ghosts.

A well loved Tim Burton classic, Corpse Bride is a tale of love and grave misunderstandings. A handsome young groom is nervous about getting his vows right, so he heads into the forest to practice. He places the wedding ring oln what he assumes is a dead tree, but is actually the finger of our deceased bride, Emily. Thrilled by her new marriage, Emily spirits her groom away to the afterlife, but how does our groom feel about being whisked away from his true bride-to-be? A classic halloween film for kids and adults alike.

An absolute classic for parents and kids alike. The Goosebumps film is based on the books of the same name written by R. L. Stine. The live action film with brilliant CGI effects follows a teenager who’s town is under threat from monsters that have escaped from the Goosebumps book series.

Captain Underpant’s Hallowen offering – fans of the TV show will absolutely love Hack-A-Ween. Melvin tries to cancel Halloween, which obviously our two brave kids aren’t going to let happen, so they create their own spooky holiday instead.

What are your family’s favourite Halloween films for kids on Netflix? Let me know in the comments!