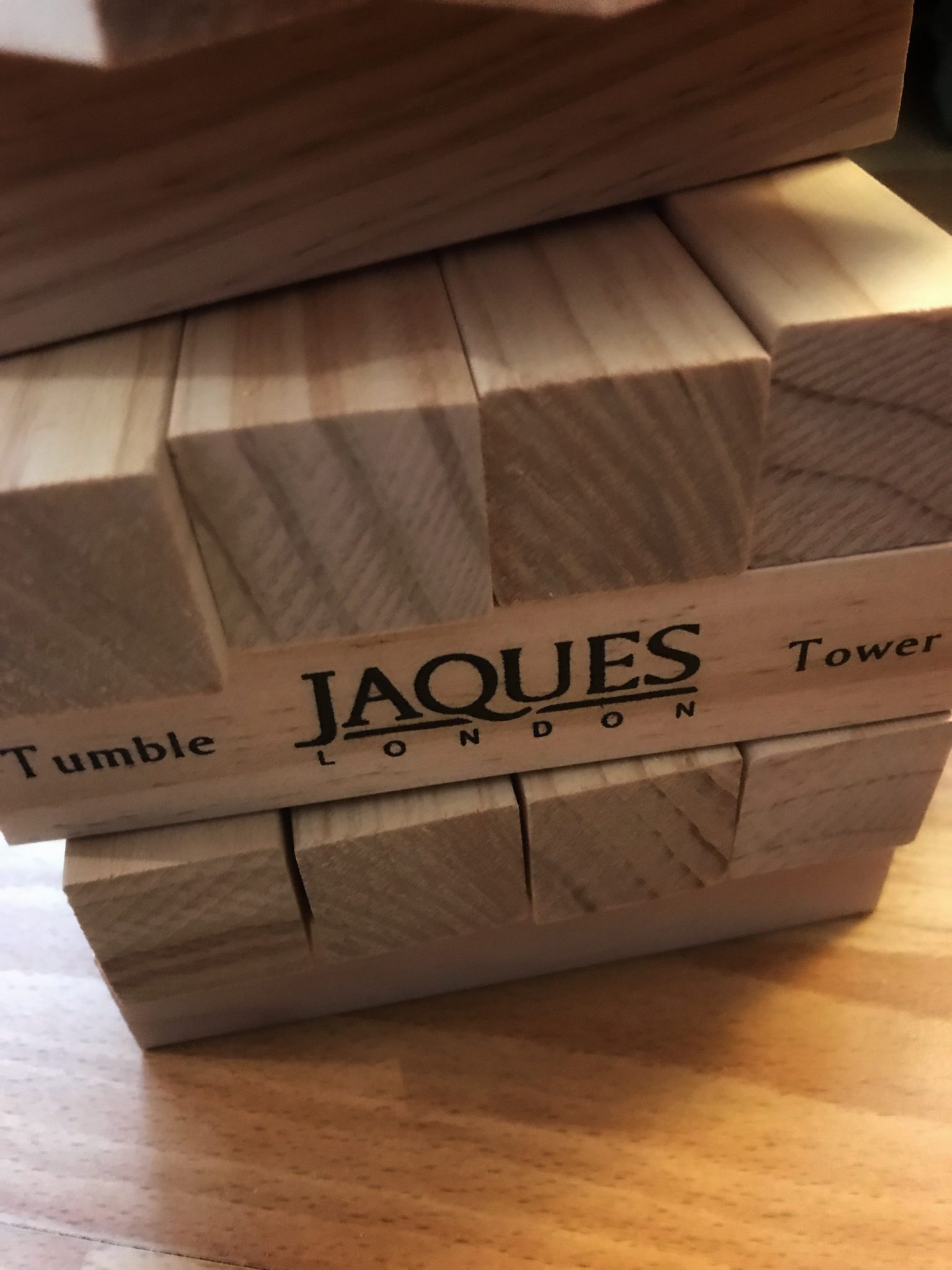 With the winter months drawing in, our weekends have started consisting of indoor activities. We have Luke with us every other weekend and most of the time we’ll visit an activity centre or go for a long walk. If it was just us three, the wind and the rain that comes with the winter months wouldn’t bother us so much, however, with Oscar everything is a little trickier and getting out for woodland walks and adventures in the rain is generally just one big faff.

One thing we’ve started doing to keep us all entertained and screen free is introducing Game Night. Admittedly it’s more of a games afternoon and the TV does sort of come into play, but we will just conveniently ignore that!

A few weeks ago, on a particularly rainy afternoon, we invited my sister over for our family games afternoon. We feasted in nachos, got awfully competitive and tried hard not to wake Oscar up once he’d fallen asleep…which was hard with all of Luke’s excitement.

Tumble Tower By Jaques Of London

First up, after the huge nacho feast, we settled down for a game of Tumble Tower which was kindly sent to me by the team at Jaques Of London. Jaques Of London have been making family games since 1795, making them the oldest sports and games manufacturers in the world. Jaques Of London remains a family lead business, their company ethos is that playing is a crucial part of life for everyone. If you’re not familiar with the brand, their most notable achievements include inventing Croquet, Happy Families, Tiddly-Winks, Ludo and Snakes &bLadders as well as the reinvention and popularisation of Chess and Table Tennis.

The first thing you’ll notice us that this is similar to a family game we all know and love – you’d be absolutely right. But what makes Tumble Tower unique is that, when fully assembled, it reaches 3ft! Once you’ve all taken a few turns and the tower has become a bit unstable, it ends up being even taller. The bricks are quite chunky and robust, which is great for little gamers. We played Tumble Tower two ways. The first way was the traditional three bricks per level – this is what gives Tumble Tower its height and we also constructed the tower with four bricks per level. Switching it up worked really well for us and gave the players more choice, encouraging us to think about strategy. Jaques Of London are all about learning through play. Games like Tumble Tower and other household favourites, such as Snakes and Ladders, teach strategic thinking whereas games like Bingo teach maths.

As a warning for anyone wanting to play this game: make sure you all agree on the rules first! We got halfway through the first game before people started shouting “oh no, you can’t do that” and “hey, that’s cheating!” Obviously, someone has to lose and when that tower comes down, it makes an almighty crash! We had great fun playing this although it is very noisy when playing on wooden flooring, so if you happen to have a sleeping baby in the same room, like I did, be prepared!

I’ve teamed up with the people at Jaques Of London and I am thrilled to be able to offer one game of Tumble Tower to a lucky giveaway winner. For more information on the giveaway and for information on how to enter, see the bottom of this post.

Family games night wouldn’t be family games night without everyone leaving the night hating each other, all thanks to that classic gem: Monopoly. We are, for some reason, all big Monopoly fans and have both the original board game version and the original version on XBOX One. There are so many novelty versions of Monopoly that I haven’t played, I would absolutely love to play the Pokémon addition! But when it comes to teaching Luke to ropes, we have stuck to the classic theme. Luke loves picking an adult to team up with and gets very excited when someone wins an auction or manages to buy a property on the board. Just like Tumble Tower, you definitely need to agree on the rules before embarking on a journey through Monopoly’s London cityscape!

In this household we do like our tower games. Another one we have played recently is Simply Brick’s Brik Buster and it’s proven to be quite popular with Luke. There are lots of additional platform plates and bricks that you can buy to build even taller towers, then you use the little plastic hammer to know the supporting beams down. The person who knocks the whole tower down by misjudging the support bricks is the loser.

Remember those Nintendo Wii’s we all had ten years back? How they were the big console? Yep – we still have one and it plays a huge part in our games afternoons. I know that game night is meant to be screen free, but hear me out: watching your five-year old jump for joy because he just got a Turkey in Bowling is pretty awesome. Luke is so into Bowling on the Wii, it’s his favourite game and we have a lot of games! Besides Wii Sports, which features the bowling game, we also love playing Mario Kart – it’s a Wii Classic!

I’m always looking to expand our games collection. After reading a few reviews, I am thinking about buying Giraffes in Scarfs by Orchard Toys for Luke this Christmas. Do you have any family game suggestions for us? Let me know in the comments.

For your chance to win one a Tumble Tower for your very own games night, simply click on the link below to take you to the giveaway page. T&C’s apply, please ensure you read them carefully before entering. This is a UK only giveaway.

*Tumble Tower was gifted to me for the purpose of this review. All thoughts are my own.

Stocking Fillers For The Whole Family – Under £10

Christmas Gifts For Kids and Babies 2018

5 Perfect Destinations for a Family Holiday on a Budget

Days Out: Wizard Weekend At The Watercress Line