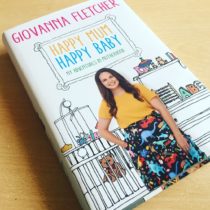 When I heard Gi was writing a book on parenting, I will admit that I was a bit skeptical. I was, at the time, unsure what sort of format the book would take. Yes, I was dreading the thought of another celebrity baby tip book. I was so pleased when it was announced that Happy Mum, Happy Baby: My Adventures Into Motherhood would be just that – a book about Giovanna’s adventures and the journey she has had bring her two boys, Buzz and Buddy into the world.

The Fletcher family has become a house hold name thanks to the rise of social media and YouTube. Tom Fletcher, dad to Buzz and Buddy, is of course famous for being in McFLY and the most recent super band mash-up, McBusted. Not forgetting that he is also co-author to The Dinosaur That Pooped… series (written with band mate, Dougie) and his latest venture into publishing, The Christmasaurus. Oh, he’s also the love of my life. He just doesn’t know it yet.

Giovanna Fletcher has achieved great things in her own right, something I am keen to mention when unfair comments fly about accusing her of “only being famous because of who she is married to”. Having written several fictional novels, stared in a few broad way shows, worked for Hello! Magazine and a few other bits and bobs to boot, Happy Mum, Happy Baby is her first venture into non-fiction writing. I’d say she has an impressive résumé, wouldn’t you?

As a parent, I of course find many of the aspects Gi talks about to be relatable. She talks through the usual trials and tribulations involved in bringing up happy, healthy children. Challenging mile stones such as sleep regression, teething and weaning are spoken about in an entertainingly honest fashion with a relaxed tone of hindsight. Giovanna speaks with honesty as she describes several moments where Tom and herself created what she describes as “a rod for your own back” and it is this honesty and this light humoured attitude to real parenting struggles which makes it such a relatable book.

Like I said, as a parent, I obviously find a way to relate to almost all the stories (except a nice few weeks away in Australia – but it turns out that wasn’t all fun and games for the Fletcher’s so I don’t feel that hard done by), however, the style in which Giovanna writes is so entertaining and in some areas, a bit blasé, that I think many other people would also relate. For many, it could bring back memories of their children who are now all grown up, or for the younger generation, a humourous side to life they’re yet to experience.

It’s not often you come across a uncensored celebrity account of anything, especially parenting. I would imagine being a “celeb parent” shoves a whole new level of anxiety and pressure into your already new and confusing lifestyle. Giovanna speaks candidly about her experiences before children, including important topics that aren’t spoken about enough, such as PCOS and miscarriage. When writing a non-fiction about your own life, it must be difficult to decide what information should be included; how much is too much? Happy Baby, Happy Mum is refreshingly honest and Gi doesn’t shy away from putting herself and her feelings out on display for all to see.

The amount of honesty in this book makes you feel connected to the author and relate to her tale of motherhood. I found myself looking back and asking myself how I dealt with the situation she’s currently describing. Did I do anything differently? Did I feel the same way as she felt? Did I put myself down and feel awful about myself for something that’s completely normal and natural for a child to do?

And that’s just it – more honesty comes out as Giovanna explains how she felt during desperate times. How she cried, how she beat herself up and how her body was her worst enemy for a while. I found it interesting to read another mother’s honest account of her anxieties and insecurities and found it to be a great help – it really did cheer me up to learn that all these feelings I myself have felt, they’re universal. I’m not alone in feeling judged, feeling guilty or feeling like a failure. Other parents have felt this – it’s just something that’s so rarely spoken about that you start to feel the problem must just lie with you and no one else. It’s so refreshing to read about this sort of thing in such honest, especially from a mother who’s life is spent in the lime light for other’s to judge and scrutinise at will.

Giovanna spread the message that it’s okay to feel like this, it’s okay to cry, but it’s also important that you realise these things pass and that others people’s opinions do not matter. Not one bit.

There’s a big theme around body positivity and the importance of spending time together as a family before they all grow up and the opportunities for such things start to decrease.

Lastly, I loved how grounded about life she was. She spoke about Tom from a mother’s point of view, describing him as any woman would describe her husband and father of her children. There’s no flashy name dropping, just a few mentions of McFLY band mates and their partners, who all happen to be the best of friends and like one big family.

Overall, I absolutely loved Happy Baby, Happy Mum: My Adventures Into Motherhood and I think pre-existing Fletcher fans and new comers alike will be able to relate and enjoy Giovanna’s new non-fiction. I enjoy her fictional novels, however, her writing style really suits non-fiction and I hope this isn’t the last we see of it…

You can buy Giovanna’s Fletcher’s Happy Baby, Happy Bum: My Adventures Into Motherhood on Amazon.