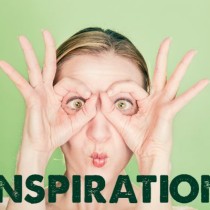 Lately, over on our Facebook page, as well as on Twitter, I have been talking about inspiration.

I have been out of the game a little bit lately. I managed to hit a point in life where all the bad things happened at once; all the very important things that needed to be sorted right away happened at once; and all the things that actually prevented me from turning my laptop on for over a month happened all at once. It’s safe to say that I am a little bit low on the motivation front, I feel as though I have lost my mojo. But I don’t want to rely on motivation – the feeling where you’re pushing yourself to do it, it has to be done so you pump yourself up to make sure it happens.

I want to rely on my once very good friend: Inspiration. That feeling where you just can’t wait to scribble down your ideas, grab your vlogging camera, get the paints out and start making and creating. I want to feel as though if it doesn’t get done, i’ll feel the urgency that it should be completed, and once it it, it’ll be the best piece of writing, vlogging or crafting that I could do and I will be PROUD of the end product.

So lately, in a bid to find inspiration, I have taken to the land of YouTube. I’ve watched a few videos on the topic of inspiration. I’m a big fan of the Fletcher’s – a love that, as a 23 year old, goes back half a lifetime, but that was love for a different reason! Tom Fletcher recently posted a video on inspiration after being INSPIRED to make one after he watched a video that Jack Howard had produced. In the video, Tom talks about what inspires him as a writer, a musician, an artist and as a vlogger. He also films the whole thing in his wife’s office – author Giovanna Fletcher. He talks about how all the bookshelves in the background are littered with photos and trinkets that inspire her, as that is her office and her area where she writes her novels. How there are pictures and little bits here and there on the walls, so whenever she looks around her little ‘space’, she feels inspired.

Carrie Fletcher has, for as long as I can remember, inspired me to do more. She’s the same age as me, and all those years ago I remember having her at my number one spot on the old MySpace friends list (mega fan girl – cringe). It’s hard not to feel inspired to do SOMETHING more with your life when you’re watching the girl who grew up in her brother’s shadow, who has become a best selling non-fiction and soon to be fiction author, a very, very popular YouTuber – earning her title as “Honorary Big Sister” of the internet, and let’s not forget her flourishing career on the West End, currently playing Eponine in Les Mis.

So, I suppose these people I’ve sort of grown up following have inspired me in many ways. Some inspirations never quite made it from teenage years to my adult years (I am, of course, referring to the poor, dust covered, out of tune guitars that sit in the corner of my living room), some however, did – the love of reading, a world I originally liked anyway, but never truly loved until prompted to pick up more books and give it a go. Books, in turn, inspire me to write and to (in my college days) write (college) award winning screen plays.
(Note: So, I was in college, but I am still damn proud of my mini Oscar award I won for my 1950’s Bank Robbery screen play!)

Other than books, my ‘idols’ and YouTubers, I have found that other bloggers massively influence me; especially the ones who start a discussion on something – whether it be parent related or not. I feel it’s important to me, in my return to blogging (and hopefully vlogging) to remember I am not just a parent – I am a 23 year old, young, independent woman who has non-toddler related thoughts and opinions occasionally. If you can’t voice your opinion on the internet, where can you? I read a lot of blogs, not just Parent Bloggers – although they do make up the 90%. I greatly enjoy reading YouTuber’s blogs as well, I just feel it gives that little bit more of an insight into the person they are, rather than the person they choose to convey on screen.

As the occasional crafty vlogger (I’m part of a great collab YouTube channel: The Kids Make And Bake Club. Shameless plug, I know!) I draw a lot of inspiration from other crafty YouTube channels and, of course, the magical world of Pinterst. I think Pinterest is your friend, no matter what your interests are. It has inspired me to do a whole lot more than get crafty with my son; I have reorganised and de-cluttered my home, found fabulous healthy and not so healthy recipes to inspire me to cook more food from scratch, it has inspired me to get fitter, the list just goes on and on.

My OH’s inspiration is a lot different to mine – his is music. I love music, of course I do, who doesn’t?! However, I can honestly say that I have never (to this date) been influenced to write, draw, vlog or be creative because of music. Maybe I listen to the wrong stuff? As an aspiring writer though, OH plugs himself into his iPod and he’s away…scribbling notes down, tapping away on his laptop and there’s not interrupting him until he’s done – mainly because his music’s so loud he wouldn’t hear me any way!

Sometimes I find that inspiration strikes at the most inconvenient of times, often leading me to have sleepless nights for no real reason as nothing ever comes from it. I will be lying in bed and in my brain I will type out an entire blog post, word for word, or even worse, my brain will come up with a whole script for a vlog – neither post nor vlog ever happen. I’m left in the morning feeling tired and a little bit useless. I would write ideas down at the time, but I know my brain will only connect the dots there and then, if I just write key things down, come morning time I won’t have a clue what I was on about. And as my main goal at 3am is to sleep, I don’t fancy getting my laptop out and typing out an entire post either!

I find it interesting watching vlogs and reading blogs people have done on the subject of inspiration but I really want to know what inspires this community to do what they do? There’s parenting bits, age related updates, there are product reviews, but there are also excellently crafted blog posts and vlogs that make me think, smile and cry! I want to know what inspires you all, it can strike in the most unusual of places, so please share your experiences with me! So far, no one seems willing to share their inspirations with me (a bit rubbish for someone looking to get their mojo back, right? Help a girl out!) so please feel free to share!

If you’ve enjoyed reading this post, you may fancy having a look at a rather picture heavy post of the wonderfully inspiration woodland that is Alice Holt Forest or maybe this emotional post I wrote during the run up to Luke’s 2nd birthday.