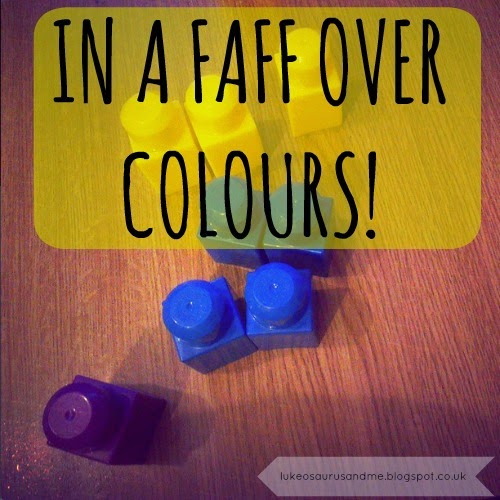 I did a very typical ‘mother’ thing this week: I saw a blog post about someone’s daughter who was two months younger than Luke, but knew her colours and shapes and, well everything, a lot better than Luke. So I obviously set out to change that with the feeling of motherhood failure looming over me.

I really felt useless after reading that blog post. I mean, it wasn’t written in a showy offy kind of way, but somehow I felt like I had really failed at teaching my son the basics in life. How could this kid, two months younger than Luke, do all this stuff that he couldn’t? He doesn’t know his colours, he can’t properly count and he still struggles with the shape sorting sometimes.
If you didn’t know, Luke has just turned 19 months old – you can read about me gushing over him talking and being such a grown up kiddo and not my little baby anymore here.
I went into this whole business a bit blind if I am honest. Only about half way through the week did I start to Google games and activities and most importantly, what to expect.
Upon my Googling, I found out that in fact, Luke isn’t slow or anything of the sort – his development is fine. I don’t have anything to worry about – I am not a failure! Huurah!
According to several sources, 18 months and onward is the perfect time to start introducing colour into your toddlers world. I mean, obviously, I would say beforehand, “oh, you’re playing with a blue balloon!” or “your socks are red today!”, but I don’t think I did it enough. But that’s okay, because it seems to be the starting point.
What I have learnt, is that it is important to say an object is [insert colour], and then say, it’s a [colour] object. For example, “the bin is red, it’s a red bin.” This apparently enables Luke to better understand the concept of colour.
Thinking about it, I don’t know what I was expecting to come from this week. Maybe I was expecting Luke to be able to fluently name a few colours and point things out and say they’re red or blue. How silly of me. At Luke’s age, having some form of understanding about what colour is should be what I aim for.
This week I have gone from being an uber stressed mum, drinking wine in the evenings and moping to James about how much of a failure I am, to coming to terms and being content with myself as Luke’s semi-compitent “teacher”.
Over the next week or so, I’ll be posting some fun games and ideas that we have tried out over the course of the week and how Luke has coped with them. At 19 months, they aren’t overly complicated, but I hope that if anyone else finds themselves in a position like me, I am able to help. Just a little.

Don’t forget: children all develop at their own rates!

In A Faff Over Colours!