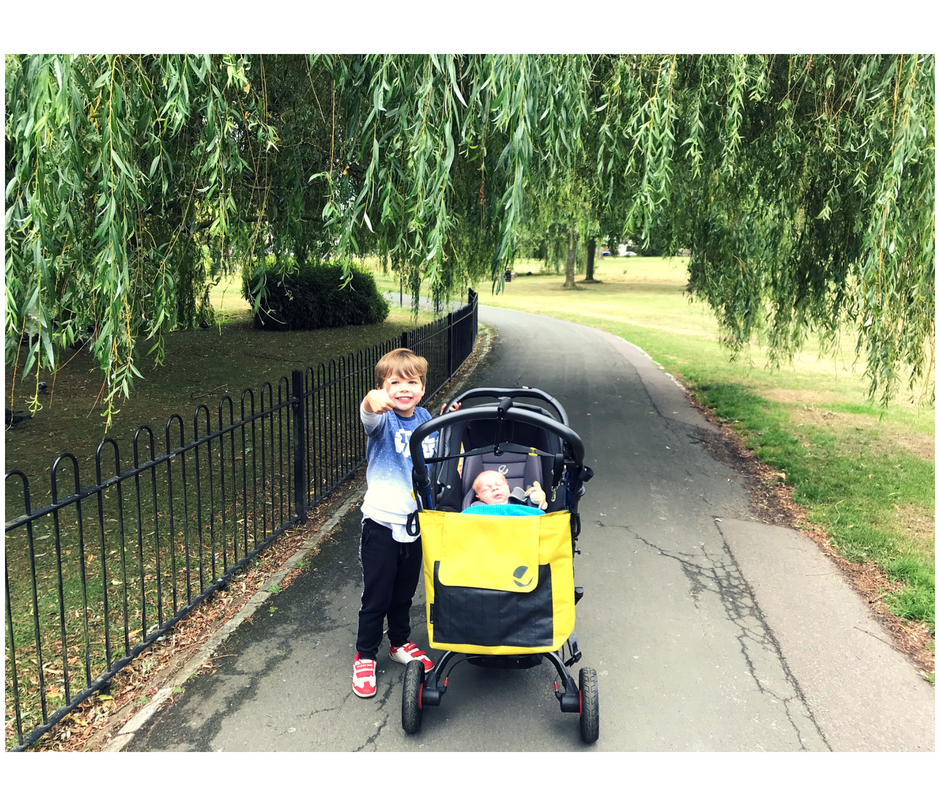 Oscar is officially two weeks old. Time has flown by, but this week has been less of a whirlwind than last week. Things have been busier, yet somehow the week has seemed slower – but in a good way. Last week flew by so quickly that I felt as if I’d been cheated out of an entire week of my life. It seemed like in a blink of an eye my baby was a week old!

This week has been a flurry of appointments and home visits, but it has still been relaxed and enjoyable. I’m still loving life as a family of four, although next week is the last week we are all together.

Discharged From The Midwife

The midwife came round and did her last assessment for me and Oscar. I’m happy to report all is well and we have officially been discharged. I’m still finding so many differences between this baby and the last. With Luke, I was kept on and had midwifery care and a mental health team for quite a while. With Oscar, the mandatory checks are done and everyone’s happy with how things are going.

A couple of days after the midwife discharged us, we decided to grab a takeaway as we were both way too tired to cook. Unfortunately, that didn’t work out well for me and I ended up with mild food poisoning. Thankfully, there was no vomiting – I don’t think I could deal with being sick after suffering from Hyperemesis Gravidarum for so many months of my pregnancy. It did mean I spent a day and a half on the loo…so soon after giving birth, that was a little traumatic but I survived.

We had a visit from the health visitor the next day (I had to reschedule!). On the phone she sounded like she was going to give me a hard time over my decision to exclusively express breast milk and feed via a bottle rather than breastfeed feed Oscar. I had some pretty horrific experiences with my previous health visitor so I was very anxious about how the meeting would go. I went into this fully expecting her to give me a hard time and for me to feel like absolute crap by the time she left. To my relief, she was actually really positive and encouraging. She praised me for expressing milk, saying that I was doing really well and that it’s a hard route to go down l, yet I seem to be doing well. Oscar’s weight gain is really good so he is definitely eating well and putting on the weight.

Finally, we had to take Oscar to the health centre to have his newborn hearing test done. I think we got really lucky with this one as Oscar slept through the entire thing. One ear was easily done while he was sat in his car seat, but we had to get him out to do the other ear as he kept slouching and the lady couldn’t keep the earpiece in. Luke came along to the appointment with us and I’m really proud of him for being so well behaved and quiet during the test.

Where Has The Cord Gone?

In other health related news, Oscar’s cord also fell off in the middle of the night this week. Mikey was doing the nappy change and noticed it had gone. He then had to rummage around in the sleepsuit to try and find it! For some reason, people keep asking me if I kept it. Is that a normal thing to do? I’m not so keen on the idea of saving a lump of rotten flesh so straight in the nappy bag it went.

We also went out on our first ever family walk. Originally, we wanted to head to Alice Holt to find The Highway Rat, play in the massive playground and have a bite to eat at the cafe. Unfortunately, the carpark was completely fully and operating on a one in, one out way. We waited for a little while but with an excited four year old in the car, we couldn’t be bothered to wait for ages. We decided to head to Fleet Pond for a walk instead.

Last year, we went blackberry picking in Tilford with Luke’s Grandpa. While we were driving down towards the carpark at Fleet Pond, I noticed there were loads of blackberries. For a moment, I thought we’d have no way of collecting any, but then a thought popped into my head. One of the joys of having a newborn is that you’ve got a change bag full of all sorts, including nappy bags! We didn’t spend ages picking berries as we really wanted to go on a long walk and tire Luke out, but we did manage to pick a few juicy ones along the way.

We love painting rocks and Luke was delighted to actually find his first ever painted rock! In fact…we actually found two. One was all the way from Bangkok! We’ve picked them up and we will hide them on our next adventure, which I think will be Portsmouth’s Southsea sometime next week.

Of course, you can’t have a week together as a family without a visit to the park. Oscar obviously slept the entire time, but it was nice to watch Mikey and Luke spend some proper boy time together. I’m so keen to make sure that Luke isn’t left out, but that he also has lots of one on one time, as well as being included in as much of Oscar’s life as is possible. He’s been brilliant, but hyper 24/7 since Oscar came into the world. I suppose that’s to be expected and I should be thankful that he’s just so full of energy and eager to help, rather than being jealous and playing up all the time.