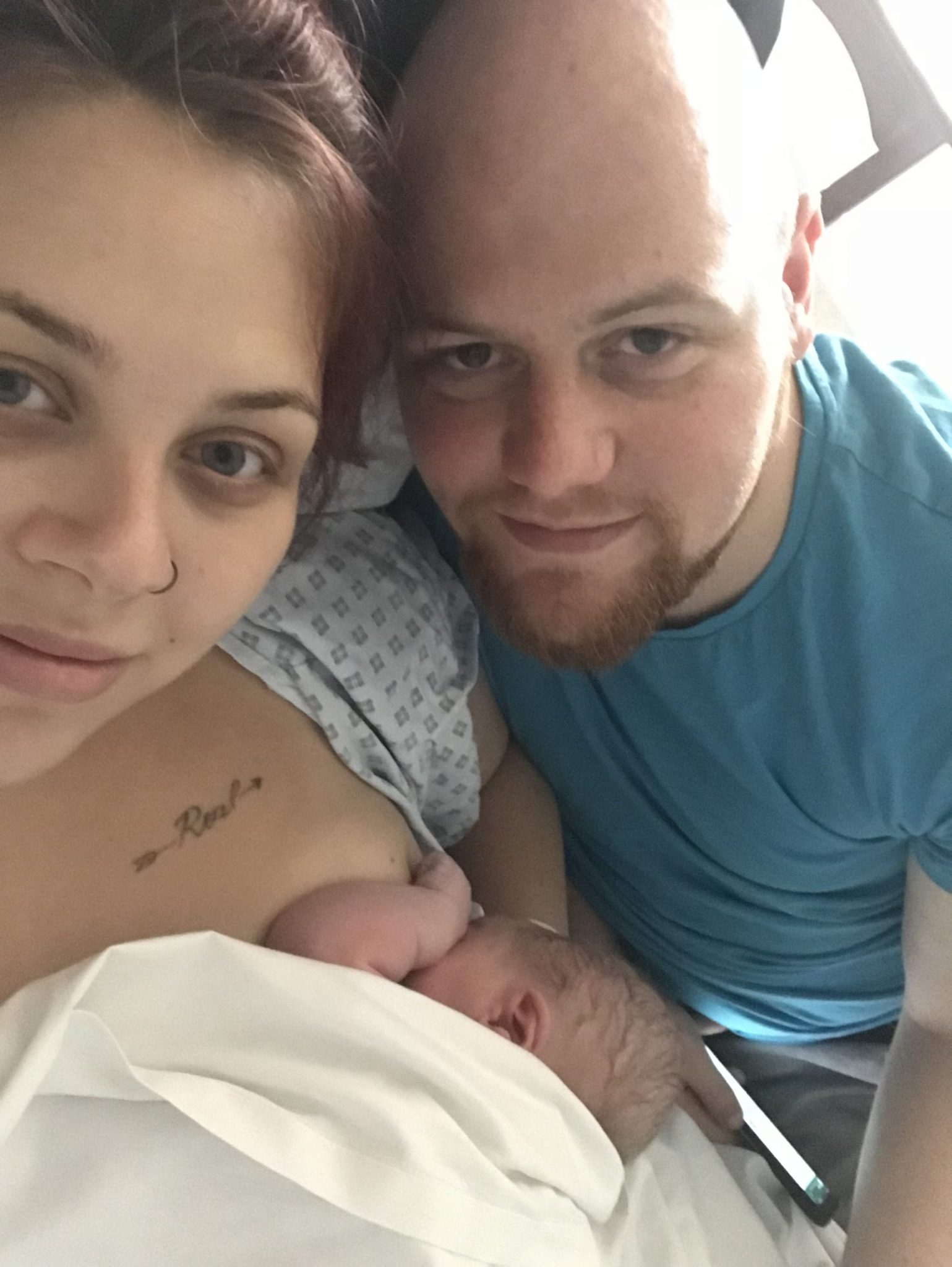 I can’t believe my baby’s first week at home has gone by so quickly! It feels like just yesterday, or maybe the day before, I was sat in my hospital bed waiting to be discharged. I can’t quite believe how fast the time is going! Here’s how the first week at home went – I hope you’re ready for some grainy baby spam!

Welcome To The World

On Sunday 29th July at 9:28am, Baby Oscar was born. Weighing a hefty 9lb 2oz, he was heavier than his new big brother’s birth weight by 4oz and his head was 37cm. Big old head, right?! Oh, he was also 11 days overdue!

Oscar has settled in beautifully and I couldn’t have asked for a more chilled out baby. Luke has taken to him straight away and loves singing to him and kissing him lots. They’re pretty inseparable and Luke wants to help with everything. He has fed him a few times and for some reason is desperate to help with nappy changes. Luke does keep singing the Waffle Dog theme tune to him but changing the words so it’s about Oscar – really sweet but slightly annoying!

The nights aren’t as bad as I remember them being. So far, things have been going well and nothing has broken us. We opted for the use of a dummy this time around which I didn’t use with Luke and it definitely makes things a bit easier when juggling two children. Towards the end of the week, we’ve been starting to get around 6 hours of sleep. Typically we put him down after a feed, cuddles and nappy at around midnight and he wakes up around 4 for a feed with his daddy and I do some pumping. Then it’s back to sleep until about 7 or 8am. I’m sure that’ll change and we’re probably really lucky at the moment, but I am making the most of it!

We’ve not ventured out loads or had lots of visitors yet; we’re saving most of that for next week. We did go out into town as a family of four to pick up some bits which was successful! We had a coffee and Oscar slept through the whole outing, typically. I did make the mistake of deciding to go to ASDA the day after giving birth. As soon as we got there, I felt wobbly and faint and then Oscar started crying and we all got a bit flustered. My advice to new mums is definitely not to go and do a full food shop 20 hours after giving birth!

Our second midwife appointment went really, really well. He’s a very healthy and happy babe, having only lost 10g from his birth weight. He’s now exclusively on expressed breast milk which is obviously working out well for him as well as me. Pumping doesn’t seem to be too much of an issue for me although it is a little awkward to work around visitors and going out. I have a good supply going and I’ve got a few bottles as back up in the fridge, so the little man will never go hungry!

I’m doing really well too. The sleep deprivation isn’t as awful as I expected it to be and, apart from when watching Moana, I haven’t cried yet. I was so worried about the baby blues hitting me and then then turning into PND, which I had with Luke for quite some time. Thankfully this time is different and my overwhelming feeling is just pure bliss. I look around at all three of my boys: Mikey, Luke and Oscar and think about what a lucky person I am and wonder what I ever did in life to deserve this.

Overall, we have had a pretty chilled out first week.

The midwife has said Oscar’s doing brilliantly, so we must be doing a good job. Sleep isn’t awful. We’ve not had any big fights over who’s done more or had more sleep (I expect they’ll come soon!) and Luke is smitten with his little brother.

All in all, it has been a brilliant first week and I’m excited to see what week 2 brings us.

What’s In My Baby’s Hospital Bag?

One Week Old – Welcome To The World, Oscar!