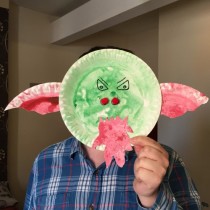 A while ago, you may remember be posting up what I called a wonderful Pinterest Fail.

The feedback I got from that post was crazy!

So many of you told me that it was such a fab idea and not at all a crafty fail – that it was indeed a craft success and I should celebrate it as so!

Luke recently got his brand new table and chair which he has been really loving. It makes dinner times easier and it really makes crafting times that little bit easier and little bit less stressful.

Therefore, I thought I’d show you all how it was done because, even if it was rubbish, Luke had so much fun making it!

I sat Luke at his table and gave him one paper plate at a time and one colour of paint at the time (but that’s because I have the whole colour mix OCD issue). If you’re less OCD than me, let your little one go crazy and have an awesome (mainly brown) coloured dragon. I also watered the paint down a little – it’s easier for Luke and saves on paint.

When you have one green plate and one red plate, leave them to dry.

One the green plate, draw two little circles for a snout and two eyes. Use the glue to stick the pom poms in the circles.

With the red plate, cut out a flame shaped section and glue to the green paper plate. Every dragon needs to be fire breathing.

With the remainder of the red paper plate, cut out two wing shapes and glue to either side of the green plate.

Then you have it, one flying, fire breathing scary dragon!

Despite ME thinking this was a complete fail, you guys and Luke all loved it. So I hope you all have awesome fun making your very own scary, flying, fire breathing dragons.