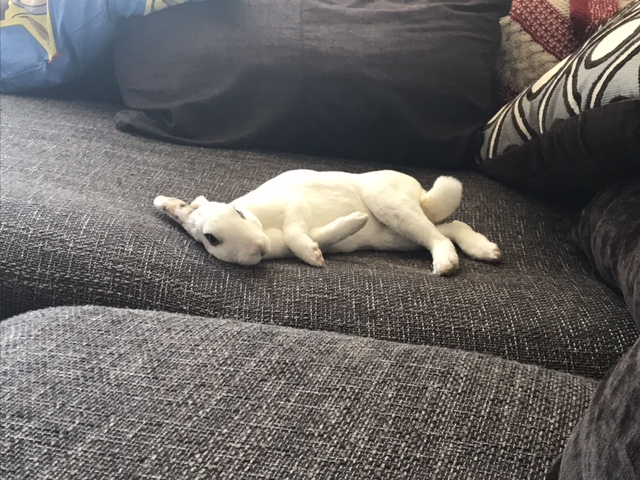 Now the Feb is nearly over, it’s starting to make me think about my dearly missed bunny, Huxley. You may remember that I’ve previously written about Huxley the house rabbit and how he sadly passed away last year. He left behind his wifey, Luna, who we tried to bond with another male rabbit, but she had clearly decided that Hux was the only husbun for her.

Huxley passed away on my birthday.

It was around March 2017 that I adopted Huxley and then, very sadly, after several days of veterinary treatment (and thousands of pounds worth of medical care), he passed away on my birthday in April last year. In terms of rabbit life spans, he had a very short life, which upsets me the most, because now that we’ve moved house and we have a garden, I know that he would have absolutely loved the grass.

Huxley was the exception to the rule.

Huxley was a one of a kind rabbit. He didn’t see himself as a rabbit, more of a cross between a human and a lap dog. I know that when people suggest buying a rabbit for their kids, a lot of people (myself included) would say they’re not cuddly pets and therefore, not suitable. But Hux was definitely the exception to the rule.

He was the best companion.

I think about my little man every day. He was the perfect companion. He was great to snuggle with and he kept me company for hours when I was bed bound with HG. He was pretty good at coming when called and he was good at spinning on the spot for treats. I cried for weeks after he died and Mikey was also extremely upset. It was a really hard time for the whole family and it was Luke’s first experience of losing a pet too. Huxley was very much a part of the family and when we decided to get him cremated, I knew that I was going to be looking at getting a cremation necklace for myself.

Huxley was such a huge part of our family.

Before Huxley died and we got him cremated, I always thought that keeping ashes was a bit freaky. I didn’t have anything against anyone who chose to keep their family members close, I just thought that it wasn’t for me. But, when the inevitable happened, I suddenly got it. There’s no way I could just bury Huxley and there’s no way that I could scatter the ashes anywhere. He was such a big part of my life, even if it was only for a short while, and so he deserves to stay in the family.

He’s always with us in spirit.

Huxley’s ‘Gotcha Day’ is fast approaching and although I will be sad, I will also be thinking about what a great addition to the family he was. I miss him loads and I know that he would have absolutely loved our new house. He’s with us in spirit, binkying around the living room and zooming around the garden.

I know that we all miss him and Luna probably misses him the most, but she’s made up her mind that no other rabbit comes close to him. She’d rather be an only rabbit than have a new male bunny to bond with. She still gets lots of fuss and love from us, so we know that she’s okay and isn’t depressed or lonely.

He was so much more than ‘just a rabbit’.

Losing a pet hurts a lot. I know a lot of people reading this will think “it’s only a rabbit”, but to us, he was part of the family. He cuddled us and licked our faces every day, he snuck out of his enclosure to eat anything he could get his teeth into, he chewed through my brand new iPhone headphones within seconds of me getting the package and he binkied around the living room like a gazelle. He was perfect and we miss him every single day. I hope he’s up there in bunny heaven having the time of his life zooming around.