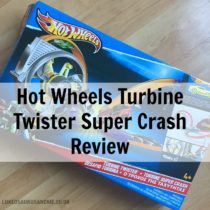 Back in August, I bought Luke the Hot Wheels Turbine Twister Super Crash toy for his third birthday. Two months later and it’s still going strong, proving to be a firm favourite for my car obsessed boy.

This Hot Wheels track sends cars speeding around a loopy track by using a wind up turbine. Add more than one car and witness a high speed crash! You can also raise one section of track to make a little jump, sending the car over the area when the Hot Wheels cars would otherwise crash into each other.

The Hot Wheels Turbine Twister Super Crash toy includes one free Hot Wheels car within the box, along with instructions on how to assemble the track. Admittedly, I struggled at one point putting together the Hot Wheels track, however, in retrospect, I would put that down to my incompetence (and the early hour of the day) rather than the instruction’s clarity.

The recommended age for the Turbine Twister Super Crash toy is 4+, but as previously stated, my 3 year old loves it and is able to wind up the turbine without any assistance. The cars are very speedy when they’re zooming around the track, however, should your child’s hand get in the way of any cars, they’ll be unharmed. Although the cars are fast, they won’t cause any injury to curious little racers.

We have a lot of Hot Wheels cars in our collection and have found that some of the heavier cars, especially the Hot Wheels Gran Turismo collection (our favourite being the Nissan Skyline GT-R (R32)) do not perform as well as the lighter cars on this track, like these.

It’s fun for Luke to pick up a car and talk about whether it will be too heavy to make it all the way around the track or not. The lighter Hot Wheels cars really do zoom around the track – we have challenged ourselves to find out how many cars we can fit on the track at the same time, our current achievement is three car at once!

How Does Hot Wheels Turbine Twister Super Crash Perform After A Few Months Of Regular Play?

As stated, I bought the Hot Wheels Turbine Twister track for Luke’s third birthday two months ago and it is still a much loved toy. Luke plays with the track every day and it still works with almost all of the Hot Wheels cars we have.

If you’re looking for a gift for a car obsessed child, I’d recommend the Hot Wheels Turbine Twister Super Crash toy, currently priced at £26.99 (instead of £39.99). It lasts well and provides hours of entertainment for children aged 3 and over.