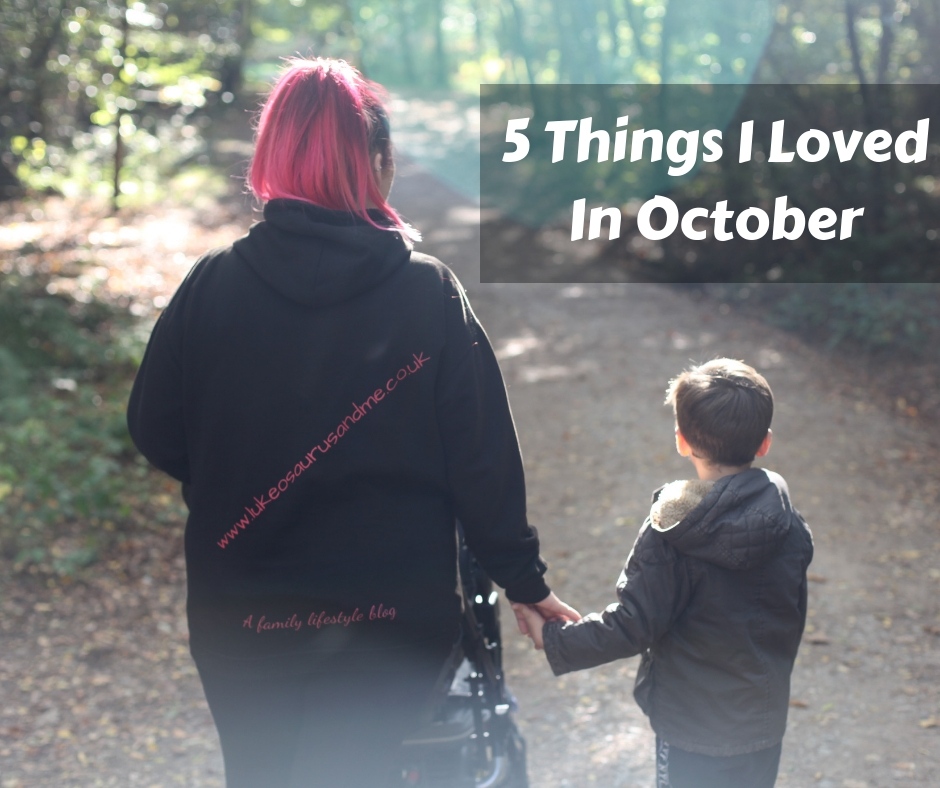 October was a busy month! It’s one of my favourite months of the year because there’s always just so much to do locally and, of course, there’s the October half term. Luckily, even though we were all very busy, I was still able to find a little bit of me time. I mean…it was only a little bit, but it was enough! Last month I wrote about my 5 top things I loved in September– here are my 5 things that I loved in October!

Now that it I a bit chillier outside, I have been enjoying the odd bath every now and then. They give me half an hour to myself, which is amazing and I can do a little bit of reading there. I’m slowly {very slowly} working my way through How To Be Happy. More often than not though, I find myself doing work on my phone in the bath. At least that gives me an extra half an hour to work peacefully! I used to be all about those bubble baths, but over the last month I have been using Epsom salts as they have been helping me with my back pain and dry skin.

I have fallen head over heels with the Neon Moon triangle bra! It is seriously the most comfortable bra I have ever worn and I love the style and shape of it. I’ve never worn a triangle bra before so I was skeptical, but it is now my absolute favourite. The matching undies are pretty nice too!

We were able to go for a few family walks during October and one of my favourites was our Gruffalo Hunt at Alice Holt Forest, which is somewhere we visit often. It was a great day out, but that “free half term activity” ended up costing me over £9 in parking and £15 in the cafe. I can’t complain too much because it was a beautiful memory and Mikey took some excellent photos of me and the boys. It also meant that I got to watch Mikey and Luke have some nice stepfather/step son bonding time while they created their cute Autumn collage in the afternoon, after collecting all sorts of autumn treasures.

I know that October may be a bit premature for the old Christmas food but seriously, if it’s there, I will buy it! I know it’s probably not great to start on it early, especially as it’s not the healthiest of food choices, but it’s just too tempting. I have been snacking on Christmas cake…possibly a bit too much! I’ve been enjoying the Christmas cake bars from Aldi and also the little packs of nibbles you can buy, you know…the ones with pretzels and mini crackers!

Ages ago when I was a new mum with Luke, I started watching Bones and get at least half way through the seasons. When my sister mentioned something about Forensic Anthropology a few weeks back, I got really excited and gave her the first season of Bones on DVD to borrow. Later she found out that it is on Amazon Prime video and I have been binge watching it ever since. I’m just about to start season 4 and I am pretty sure that I am still re-watching things I’ve already seen…but don’t really remember as it was over 5 years ago! If you’ve not seen it, Bones is a TV show about a Forensic Anthropologist, Temperance (Bones) Brennan (played by Emily Deschanel – Zooey Deschanel’s sister) and her FBI partner, Special Agent Seeley Booth (David Boreanaz). The show follows the character’s personal lives as well as the cases that Bones and Booth solve; interestingly it is also very loosely based on the life and novels of Kathy Reichs, a real life forensic anthropologist, who also produces the show. I have also listened to a few of Kathy’s audiobooks in the past and enjoyed them!

Days Out: Hunting For The Highway Rat at Alice Holt, Farnham

The Best Seasonal Home Scents For Autumn and Winter 2018