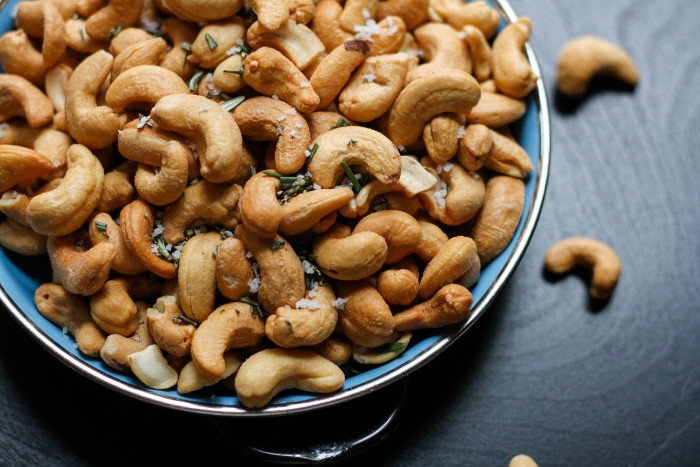 The cashew nut—or the actual fruit of the cashew tree, Anacardium occidentale—now figures prominently in a canonical modern list of “superfoods.” But with the highest magnesium content per serving of any tree nut (aside from Brazil nuts and almonds), rich Vitamin E cancer-fighting phytochemical properties, and a tasty flavor to boot, cashew nuts deserve their growing reputation.

The cashew has long been a staple of Asian cuisines and is likely to be found chopped up in your favorite curry or stir-fry. In the West, it’s a common ingredient in pastries like cookies and cakes. It’s also packaged on their own as stand-alone snacks. Cashews are also behind modern vegan and vegetarian innovations like healthy plant-based milk and plant-based cheese.

What the origins of this odd kidney-shaped tree nut, what parts of the tree have historically been in use for human consumption, and how do the by products shape the market today? Here’s a brief history of one of the world’s most widely-consumed nuts for you to snack on.

A Tree of the Tropics

Though it’s not the first country we associate cashew nuts with, the cashew tree is actually native to northeastern Brazil. This evergreen shrub flourished in the tropics in a similar way to its cousin varieties of mango, pistachio, and poison ivy. At some point, cashew oil was believed to be a natural remedy for the disease of leprosy.

Portuguese sailors landed in Brazil in the 16th century, and thus brought the cashew plants aboard their ships to India and East Africa. The hot weather, humid climate, and rich soil conditions allowed the cashew trees to thrive in these regions. When commercial tree growing peaked in the 21st century, cashew trees also flourished in countries like Nigeria, the Ivory Coast, Indonesia, and Vietnam. Suffice to say, cashew trees love the sun and live off of the tropical weather.

From Root to Seed: How Humans Consume Byproducts from the Cashew Tree

What are the other factors that have allowed for the cashew tree to endure throughout history? For one, the trees can begin bearing fruit as early as two to three years after they are planted. For another, they are remarkably resilient trees—they are drought-resistant and can still grow even in marginal soil.

But perhaps the most outstanding quality of the cashew tree is its adaptability. Of course, this manifests in its primary byproduct of the cashew nut, which is a kidney-shaped drupe (or stone fruit) plucked off the bottom of a soft and fleshy cashew apple. The nuts are roasted and dried so as to render their poisonous outer shells easy to remove. Around the 1980s, scientists have also begun studying the anacardic acid in these shells for medicinal purposes, especially with regard to their antibiotic properties.

Still, the cashew tree yields more than the nuts themselves. The cashew apple is said to be juicy, sweet, and citrusy in flavor, but it can only be enjoyed by cashew growers themselves as it perishes within 24 hours of being picked. Moreover, cashew tree wood is renowned by woodworkers to be stable, light, and easy to work with.

These days, cashew nuts enjoy worldwide ubiquity. In large part, this stems from a revival of a lifestyle movement that began as early in human civilization as the 7th Century BC: vegetarianism.  Vegetarianism espouses abstinence from consuming animal flesh and, in the case of veganism, animal byproducts. A complementary reason to choose this kind of diet is to minimize one’s environmental footprint, as well as foster greater compassion for animals.

Out of these movements, new commercial possibilities have emerged for cashews. They are rightfully depended on as an alternate source of protein, as one half-ounce serving of cashews may contain as much as one ounce of protein. Cashews can also be used as a base for dairy substitutes, such as cashew milk, cashew cheese, and cashew butter.  Many plant-based diet advocates like drinking it as unsweetened cashew milk or enriching coffee, smoothies, or creamy savory sauces with it.

In summary, the cashew nut has been part of the human diet—and the fabric of human life—for several centuries. In each of these phases, it has improved health and supplemented human ingenuity. For the productivity and self-sufficiency that this tree inspires, it is worthy of its native Tupian name acajú, “the nut that produces itself.”

A Brief Look into the History of the Cashew Nut