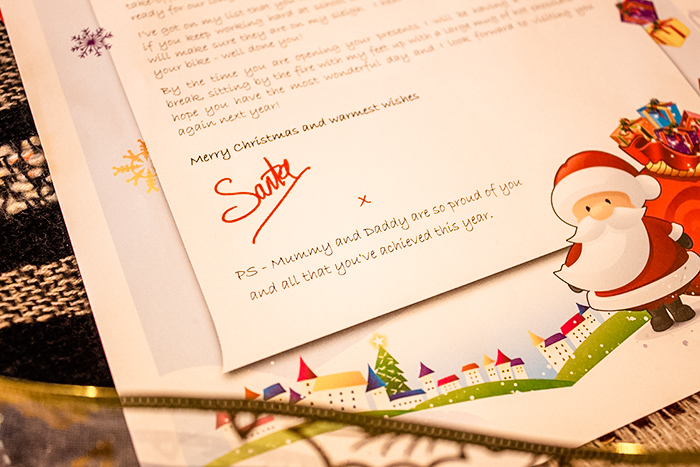 Yesterday my little man came back from a weekend at his dad’s to find a big red envelope waiting for him. Addressed to Master Luke and stamped from Santa’s Workshop in the North Pole, his eyes immediately grew wide and he tore into the envelope as soon as he could.

Inside, he found an extra special letter from the Big Man himself.

The Magic Of Christmas

Now that Luke is 6, he’s really started to understand the magic of Christmas. This year, receiving a letter from Santa made his eyes light up and his voice was giddy with excitement as he tried to guess what Father Christmas would say to him. He even had a tinge of nervousness as he commented how lately he hasn’t been as well behaved as he could have been, so he hoped he wasn’t on the naughty list. Luke needn’t have worried though as when he finally tore into the envelope, he found that Santa had some really positive things to say to him about his achievements this year.

Luke’s letter from Father Christmas mentioned the type of toy he was hoping for (ALL the Star Wars toys!) and also praised him for one of the achievements he has mastered this year – learning to ride his bike without stabilisers. The letter has a beautiful Christmas themed border and it’s even signed by Santa himself (with a kiss – Luke was so happy with the kiss!)

All of this is fantastic and my kid is absolutely made up with his letter from Santa, but what makes these specific letters extra special is the fact that every time Santa writes one, Naomi House and Jacksplace hospices receive a donation. Naomi House and Jacksplace’s work is absolutely invaluable in the community as they provide support, respite, end of day care and bereavement support for life limited and life threatened children and young adults. More than 525 life threatened and life limited children and young adults, plus their families and friends, have received vital hospice care and support across Hampshire, Wiltshire, Dorset, Berkshire, West Sussex, Surrey and the Isle of Wight.

For just £5 per letter, Naomi House and Jacksplace can chat with their contacts at the North Pole and charm Father Christmas himself into writing your child a personalised letter. Santa’s letter is personalised with your child’s name and address, the gift they’re hoping for and something that they’ve achieved this year. There’s also the option to add a little personalised message at the end of the letter, which appears as a P.S. The letter is then sent to your little one, directly from the North Pole, with an official Santa’s workshop stamp!

For Just £5, You Can Make A Huge Difference To Someone’s Life

All proceeds from Naomi House & Jacksplace’s Letters from Santa will help the families in their care make extra special festive memories together during this precious season. The difference to these people’s lives a £5 letter can make is astonishing and by purchasing just one letter, you’re safe in the knowledge that, not only are you making your child’s Christmas, but you’re also bringing a little bit of magic into another child’s life too.

Santa may be magical but he still needs time to get letters written and delivered if they’re to reach all the little boys and girls in time for Christmas. For that reason, letters must be ordered by Sunday 15th December! Letters ordered later than this date will not arrive in time for Christmas Day.

So if you’re looking for a way to spread a little extra Christmas cheer this year, please consider purchasing a letter from Santa via Naomi House & Jacksplace.