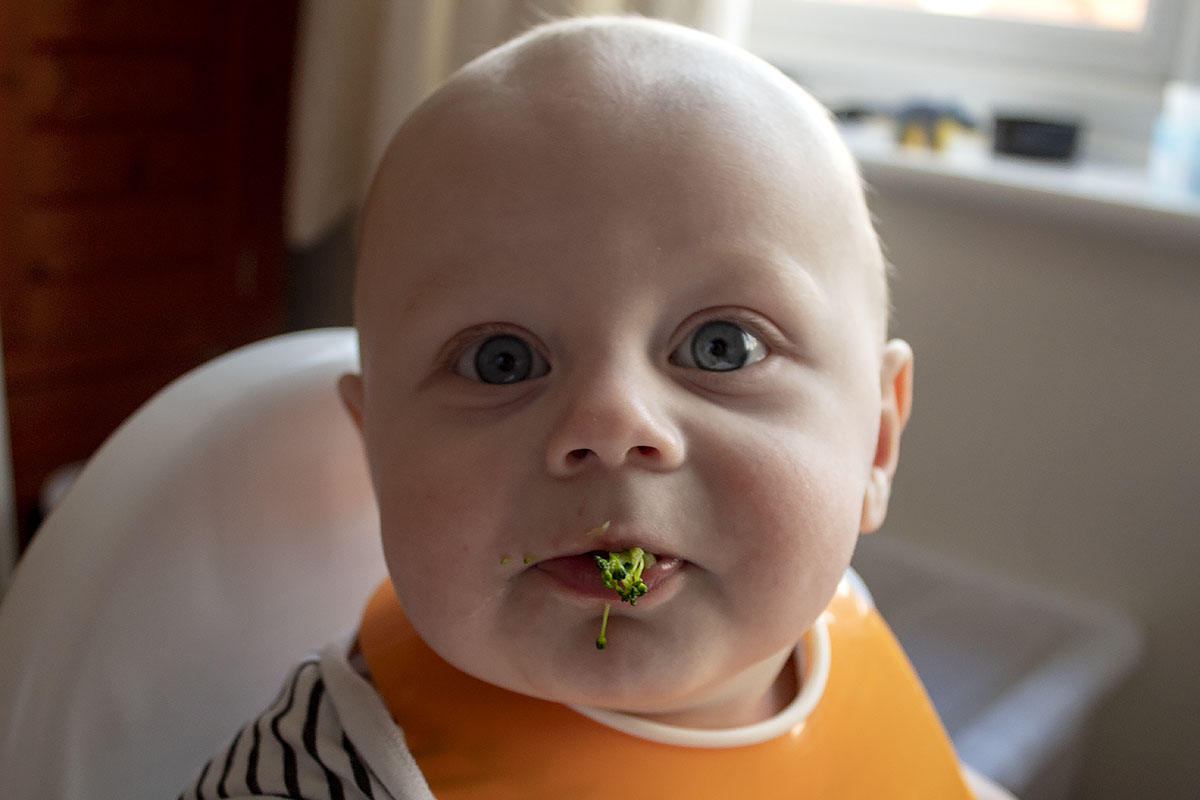 I said from the very start of it all that I was looking forward to the weaning stages with Oscar. He’s my second baby and so even before he was born I had a fairly good idea of how I wanted the weaning process to go. I knew what types of food he’d be having and how he’d be eating them. I had a new found confidence that I definitely didn’t have with Luke, which is lucky because with baby led weaning, there’s usually a fair amount of gagging and funny reactions to the food you introduce. As a first time and young mum with Luke, I don’t think I coped as well as I could have done when it came to the weaning process and now I’m able to mostly take it in my stride.

Oscar is now 9 months old, so in the grand scheme of things, his weaning journey has really only just begun.

There are still quite a few allergy foods that I haven’t tried him on. I know that the sooner they’re introduced the better, but I have found myself putting it off. I’ve been meaning to try him on peanut butter for a while now but I haven’t got round to it yet.

I spend most of my days working from home around his naps so I’ve been waiting to introduce these foods when someone else is present – just in case! This is mostly just because, should anything happen, I don’t drive and arranging school pick ups is a logistical nightmare. With someone else around, at least I’d be able to go to hospital/the GP and someone else would be there for Luke.

Peanut butter aside, Oscar has tried a huge variety of flavours and textures and is a very keen eater.

It never ceases to amaze me just how different Luke and Oscar are! The oldies who have been here since the beginning will know that I wrote a lot about fussy eating, hiding vegetables and cooking with Luke when I first started blogging. He was a terror and refused to eat most things. Thankfully, now that he’s 5, he eats almost everything and eats really well compared to his friends at school. What a #MumWin.

But back to Oscar… We gently introduced some food to him around the 4 month mark.

Luke was ready for food before 6 months and Oscar was no different. To start off with, it was just a little spoonful of baby porridge once a day. At that stage it was all about getting used to different tastes and textures of the food rather than actually eating it. We didn’t have him in a highchair at this point either as he was still a bit too little and wobbly, but when we did buy one, we picked up a second hand IKEA high chair and tray for a fiver from Facebook. I’m forever trying to be frugal and I think that with most baby things, buying second hand is the way forward because they just get outgrown so quickly.

From here we moved on to some pureed fruit and veggies.

We avoided broccoli for a little while as Oscar was already quite a gassy baby and we didn’t want to exacerbate that.

As the 6 month mark drew closer, I made up some pureed vegetables for Oscar which I would pour into ice cube trays, freeze and then store in ziplock bags in the freezer. At this stage I made pureed carrot, pureed sweet potato and pureed parsnip by boiling the veggies and blitzing in the blender with most of the water from the pan. Obviously these were quite runny, perfect while he was getting used to different textures and thicknesses.

I made up small batches at a time and gradually decreased amount of water I added to the blender, thus slowly making the puree thicker.

By 6/7 months he was happily eating homemade vegetable purees and some ALDI pureed fruit pouches. To help with teething, we bought some Nuby Popsicles makers* and used the pureed fruit pouches to make healthy popsicles. These went down a treat and made a great lunch time or breakfast meal. Introducing popsicles meant the introduction of baby led weaning and therefore, mess!

I can’t tell you how many bibs we’ve been through. In the beginning, the Tommee Tippee Catch All* ones were great and Oscar loved eating the “bib food” which is what we call all the food he dropped and collected in his bib. The little pouch was great for him at this stage as he was still getting to grips with holding food and getting it from the highchair to his mouth. Quite a lot missed and fell into the pouch and he soon learnt that he could rummage in there and grab the rest of his food.

However, as he got older, he worked out how to pull that bib off and so we had to up our bib game. I am now a big fan of the full sleeved bibs* you can buy in supermarkets like Tesco and also online. I’d recommend getting at least 3 bibs – the Tommee Tippee one is great as a first bib and also relatively cheap. It’s super easy to clean and the pouch collects little crumbs and any puree spills too.

For the messier meals, the long sleeved bibs are a lifesaver (plus they are harder for babies to pull off)! There are a few nice ones in supermarkets but after having a good shop around, I’ve seen some really great ones on Amazon.

From 6 months onwards, we started introducing finger size chunks of food, as well as feeding some pureed food.

It’s no secret that not a lot of the food given during baby led weaning actually gets eaten. As such, after a few days of trying solely the baby led weaning approach, it was clear that our little munchkin was still hungry after his meals. We’ve now settled on a weaning approach that works for us: a mixture of baby led weaning and pureed food. We start off with some nice grabbable chunks of food, such as cucumber sticks, rice cakes, toast soldiers etc. Once he’s had his fun with them and thrown the majority of it on the floor, we go on to offer him some pureed food that he normally gobbles straight up.

At this stage we also gave him bits of fruit, such as strawberries and grapes, in a NatureBond weaning dummy.* We found this to be a really great way of introducing flavours to his diet without the mess or choking hazard.

I have noticed now at 9 months he has started to take in a bit more of the food offered to him before we get to the puree, so this is a good sign and I’m looking forward to introducing more of a variety to his diet now.

I’ve just started to branch out into cooking and preparing baby specific meals. I’m not quite at the stage of creating spaghetti bolognese for him yet, but I’ve been making some tasty youghurt drops and banana pancakes which he seems to really enjoy.

I’ve also been doing a fair amount of research into more exciting baby led weaning recipes to try out with him, which I will be writing about as soon as I have experimented a little bit.

Breakfast will be one of the following:

Sometimes a handful of dry cereals such as multi grain hoops, malt wheeties or cornflakes.

Lunch is a mixture of:

If he’s still hungry I’ll have him some homemade ‘pureed’ vegetables (these are left quite lumpy at this stage).

Dinner is a mixture of:

After he’s had a pick at those, I’ll either warm up a mixture of pureed sweet potato and mix with rice or give him some other pre-made pureed food.

For dinner I sometimes give him a little food from baby pouches. I’m definitely not brand loyal and I’ve used ALDI’s own brand as well as much more expensive brands. To be honest, Oscar likes them all the same and considering it’s not his sole source of food, I’m not too worried by branding.

As you can see, he gets a relatively good mix of baby led weaning choices as well as some spoon fed food to help keep his tummy full. I’m going to be writing up another blog in the near future that features some other meals/baby led weaning ideas that Oscar loves, so keep an eye out for that if it’s something that’ll interest you.

I’d love for you to share you favourite weaning snacks and meals with me as I’m always on the lookout for more inspiration. I have recently set up a Baby Weaning board on Pinterest too, so head over and have a look if you’d also like some more inspiration!

Harmony Ball Necklaces: What Makes Them So Special?