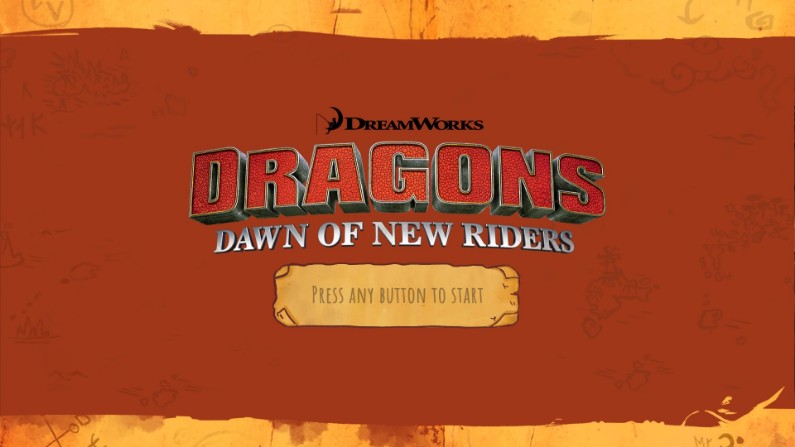 Although we’ve had some glorious sunshine lately, enough that you could wear a t shirt and no coat, the first couple of days of our February half term were wet and windy. I’m an all-weather kind of adventurer, but when I’m on my own for the week looking after two kids (one is only 7 months old!), sometimes it’s easy to just snuggle up and get cosy on the sofa instead.

Luckily, for those drizzly and miserable days, we had something really cool to keep us entertained. We were very kindly gifted the new Dreamworks Dragons Dawn Of New Riders by BANDAI NAMCO Entertainment (think Dark Souls, Dragonball Z, Naruto and Soul Calibur) on PS4 to play while the wind and rain did its thing. We downloaded a digital copy of the game from the PlayStation store, but it is also available on XBOX One and Nintendo Switch; you can buy both physical and digital copies of the games.

*We were gifted Dreamworks Dragons Dawn Of New Riders on PS4 for the purpose of this review. All thoughts and opinions are my own. Post also contains affiliate links.

Dreamworks Dragons Dawn Of New Riders is the first proper console game that Luke has ever played.

Unsurprisingly, 99% of the games Mikey and I own are not suitable for a 5 year old. The console games we do play together as a family have always been on Nintendo consoles. We recently bought a Nintendo Switch and I looked on proudly as Luke started his very first Pokemon adventure, and I’ve written before about how he totally fancies himself as a Wii Bowling Champion.

Getting to grips with a proper game console controller was something I didn’t expect him to pick up so easily. He must have ‘gamer’ in his blood!

I thought I’d share my views on the Dreamworks Dragons Dawn Of New Riders from both a parent’s and a gamer’s POV. I’ve played the game for a few hours and familiarised myself with the gameplay style, as well as watching Luke battle his way through the levels.

In Dreamworks Dragons Dawn Of New Riders, you don’t play as Hiccup. In fact, you play as a whole new character – a scholar named Scribbler. At the beginning of the game, Hiccup finds Scribbler next to mysterious dragon egg, unlike any they’ve ever seen before. Scribbler has lost his memory (probably something to do with the big attack on Havenholme, the dragon sanctuary Hiccup and his friends have built) and doesn’t know who he is, why he’s there or why he’s got a dragon egg. It’s not long into the initial cut scene that some evil dragon hunters approach and run off with the dragon egg. It’s up to Scribbler to chase them down, retrieve the egg and find out who these nasty dragon trappers are really working for. Oh, and that mysterious dragon egg? It hatches and you meet Patch, a brand new breed of dragon – the ‘chimeragon’ – who, as you may have guessed, has an interesting array of powers! Oh, one last thing: did I mention you could fly your dragon?!

Dreamworks Dragons Dawn Of New Riders is a RPG style game. It features elements most gamers will be familiar with, such as crafting, using buffs and figuring out tricky puzzles.

There are several levels, featuring different terrains and environments. We’ve not played far enough through the game to have finished it just yet, but Luke’s only spent a few hours exploring and has already covered a fair bit of ground. He’s walked over towering bridges, braved a dungeon and explored the icy peaks of another island – Valka’s Mountain. Yup, if you’re a fan of the films, you’ll recognise that name – it’s Hiccup’s mother’s island!

Fighting your way through the levels is pretty straight forward and at the end of each level you’ll come across some form of Boss Battle. Along the way, you’ll encounter dragons that have been locked up in cages – you need to rescue them! Once you’ve beaten the boss battle, if you find yourself in a really sticky situation, you can call on the dragons that you’ve previously rescued to come and help you out.

The enemies are pretty standard and repetitive. For me, this was pretty tedious, however I am 26 and definitely not the target audience for this game! Luke didn’t seem to pick up on the predictable enemy formations and found the variety of enemy an enjoyable challenge. The combat styles reminded me a little of other games out there due to there being ‘heavy’ attacks that must be dodged if you want to win the fight. There are also enemies who always have their shields up and require you to get behind them and long range enemies who throw spears at you. Working out what the different categories of baddies look like and how to battle each one took Luke some time to get used to, but as this is his first game and only experience of battling foes, I think we can let him off! Occasionally you have to fight a dragon who’s being controlled by the villains. This adds a little extra flare to the game, offering some variety and a bit of a challenge for children. Also – watch out for traps!

I can only speak for the PS4, but the controls are very straight forward – perfect for little hands! In order to switch between Scribbler and Patch, or cycle through your weapons, you do need to use the bumper and trigger buttons on the PS4 controller. However, you don’t need to do these things in the heat of a battle, so if your child needs some time to look down and work out what they need to press, it shouldn’t be an issue. For us adults, it all comes so naturally, but by watching Luke play I found it really interesting that he kept having to look down at the controller at certain points in the game. I’d be interested to see what the controls are like for the Nintendo Switch, although I would imagine you just join your two Joy-Cons up with the game control handle or use a Nintendo Switch Pro Controller.

I will say that when it comes to riding your dragon, the controls are similar to those in flight simulators. Everything’s a bit back to front and upside down, which is pretty tricky to get your head around. Luckily, the map isn’t that big when flying, so you can’t really go too far wrong.

I personally love this game and so does Luke. It’s a really fun family adventure which I’m sure will become a firm favourite in this household. There are a fair amount of cut scenes which do seem to go on for a while, but I think that’s only tedious to me as I have to read them all out! I love the graphics: all the dragons are super cute. I love the RPG aspects, such as collecting herbs and metals to trade for potions (health, buffs) and upgrading your armour and weapons. Dreamworks Dragons Dawn Of New Riders combines just enough of the RPG elements with family friendly fun and challenging puzzles to make it an addictive, gripping adventure that your kids will love playing. It’s also a fun one to watch your kids play, unlike Pokemon Let’s Go, which I find intensely frustrating to watch!

Taking everything into consideration, I would give Dreamworks Dragons Dawn Of New Riders a hefty 7 out of 10. It’s enjoyable to play and simple enough for kids to grasp. The story line is pretty cool, especially if you’re a fan of the franchise. I love watching Luke play it and he gets really excited whenever he unlocks a new feature, like one of Patch’s special abilities. The controls are simple, there are puzzles and dragon fights scattered through the levels which keep things interesting and, of course, being able to fly your dragon to different islands is also a seriously fun feature.