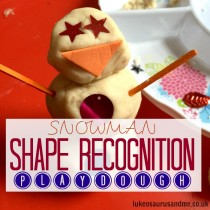 I admit, it’s getting towards the end of January now, however it’s still winter until Saturday, March 19 (how crazy is that?), therefore it is still totally acceptable to carry on having fun mornings with winter themed activities!

I threw together this snowman play dough shape recognition activity one afternoon as it was so horrible outside I just couldn’t bare the thought of going to the park with Luke. I’d say it probably took about 5 minutes to set up, maybe 10 if you’re having to make the play dough as well.

To make the dough, use this play dough recipe. It doesn’t require cooking and as we’re making snowmen, you don’t need to add any colouring to the mixture when you’re bringing it all together. When you’ve finished playing, keep it in an air tight container and keep it somewhere cool (we keep ours in the fridge).

Luke loves play dough (what toddler doesn’t?), so I knew as soon as this idea popped into my head that it would be a big hit. This activity kept him going for at least an hour.

Whenever I see a really good deal on bumper craft boxes, I always grab one. Luke has a huge collection of miscellaneous crafty supplies that don’t usually get much use, so this was a great excuse to get them out and have a play with them.

I used a big serving/dip dish that I bought from PoundWorld a little while ago to keep track of all the shapes and the play dough – these dishes are great for all sorts of activities or crafts; I highly recommend picking up one or two next time you’re in town.

To practice our shapes, we added plastic metallic shapes (hearts, circles, stars and leaves) to the serving dish and also slightly bigger foam shapes (triangles, squares, circles, hearts, diamonds and tear drops). I also added a big scoop of coloured sticks – I’m not sure what the official name for these are, but they’re like matchsticks without the heads and they’re perfect for play dough!

I rolled out three balls to make the snowman’s body, then we decorated him using the shapes available. He has a nose, made from a foam triangle (he can’t quite say triangle, but he says something sort of close to it!), he has stars for eyes (we can definitely identify that one, thank you Christmas!), and circles for buttons. Also sticks for arms.

We played around with different shapes for a little while. We talked about the shapes we were using to create the body parts and clothing. After using stars to create eyes, Luke was very concerned that our snowman didn’t have hair, so he had to fix that.

Then he decided to make his own snowman, which I feel is crazy adorable. He gave him arms too. I’m still in total awe when Luke does things like this, when he copies what I’ve done (or what I’ve said – oops!) and I know it’s perfectly normal, but that doesn’t mean it’s any less exciting for me!

*Some links on this blog may be affiliate links. Lukeosaurus And Me is a participant in the Amazon EU Associates Programme, an affiliate advertising programme designed to provide a means for sites to earn advertising fees by advertising and linking to Amazon.co.uk
Loading Comments...
Comment
×
%d bloggers like this: