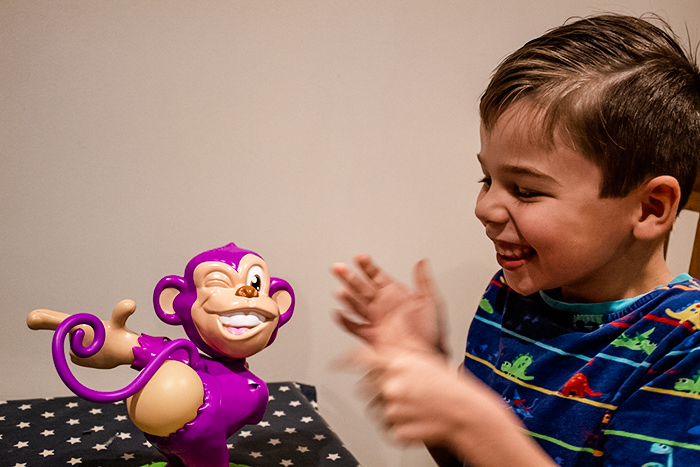 AD/Gifted Item – all thoughts and opinions are my own. Affiliate links are marked with a *.

You know what’s missing from your life as a parent? More toilet humour! Oh yes – I am talking about farts…blow-offs, fluffer doodles, bottom burps. Children, for some insane reason, find farting to be absolutely hilarious. That’s why, when I was offered a chance to review a brand new game called “Pull My Finger” (oh yes!), I knew straight away that it would be a massive hit with Luke.

Boy – I was not wrong! The kid is absolutely OBSESSED with this game. He has played it for hours, coaxing family members in to join the fun and giggling like a lunatic when the anticipation of someone losing gets too much. So, if you feel like your life is lacking in toilet humour, or more likely, your life is haunted by said humour and you feel like a little more couldn’t hurt, read on for my in depth review of Pull My Finger.

Pull My Finger Game – How Is It Played?

I suppose Pull My Finger is technically classed as a board game and is available from stores such as Amazon*, Smyths Toy Store*, The Entertainer*, Argos* and more.

The premise behind the game is pretty simple: you spin the banana shaped spinner and follow the instructions, pulling Mr Buster the money’s finger the appropriate number of times. Each time you pull Mr Buster’s finger, his bum inflates until, eventually, he can’t hold it in anymore and lets out a giant, rather noisy fart. Whoever makes the money fart is the loser!

The spinner doesn’t just have numbers on it – oh no – to liven things up you can end up skipping a go, reversing the way in which players take turns or picking a random player to take a go.

Fun For All The Family

I will admit that as a 27 year old woman, Pull My Finger clearly isn’t the type of game that’s targeted towards my demographic. However, when I sat down to play Pull My Finger with Luke, his daddy and his aunty, I’ve got to say that it has been so much fun!

Luke’s manic giggles and screams of delight whenever Mr Buster finally blows have made the whole thing completely worth it. Every time someone lands the banana spinner on the “3+” section, he laughs evilly, knowing that they then have to pull the monkeys finger 3 times and then spin again, potentially gaining even more finger pulls. Luke wills people to land on the high numbers and laughs at them as they worriedly pull Mr Buster’s finger – watching his bum inflate to some pretty impressive sizes.

You never know when Mr Buster’s going to blow!

Sometimes his bum can inflate to be pretty sizeable and other times it seems like it’s only half way to full capacity. That’s probably the best thing about this game and why Luke loves it so much. The anticipation of never knowing when he’s going to fart means that with every pull of his finger, the suspense grows.

Maybe it’s because of the anticipation, or maybe its because the farts are quite loud – I’m not sure – but when Mr Buster does FINALLY blow, players always seems to let out a scream and jump in their seats. It’s pretty hilarious to watch the excitement grow and I’ve had a great time playing this with Luke after school.

What Comes In The Box?

Everything you need to start playing comes in the box, so there’s no need to hunt around for batteries – thank the lord!

To set Pull My Finger up, you just need to cut him loose from the packaging with some scissors and open up the separate components of the game. Placing Mr Buster’s feet into the grassy stand is step 1. You have to push quite firmly and I wasn’t sure I was doing it properly at first, but eventually I got him stood up and all was well. Next, you just clip Mr Buster’s butt onto the monkey and finally, you clip his tail in.

That’s it – you’re all set to go. The box also contains the banana spinner used to determine how many finger pulls the player has and a spare butt – just in case!

Our Thoughts On Pull My Finger

I live in a house with 3 boys, so I am fairly used to the fact that toilet humour makes up around 80% of the conversations. It’s safe to say that Pull My Finger made an excellent addition to our family games night and we’ve been playing it practically non-stop since we opened the box.

Honestly, I haven’t seen Luke laugh as freely and as uncontrollably as he does when playing Pull My Finger for such a long, long time! It was a real joy, as a parent, to watch him get so invested in a game and watch his little face screw up into a delighted yelp whenever he lost and the monkey farted.

It may not be the game for everyone, but for my kid, it’s one of the best board games he’s played so far. The game play is simple, yet effective. The fun factor is off the scale – he’s absolutely besotted with it. If you’re looking for a game to play with the kids that’s fun for everyone and won’t cause any squabbles, I would definitely recommend Pull My Finger. We’ve had a blast playing with it and I’m sure it’ll remain a firm favourite for quite some time.

You can pick Pull My Finger up in most toy stores – it’s also available in Argos and Amazon.