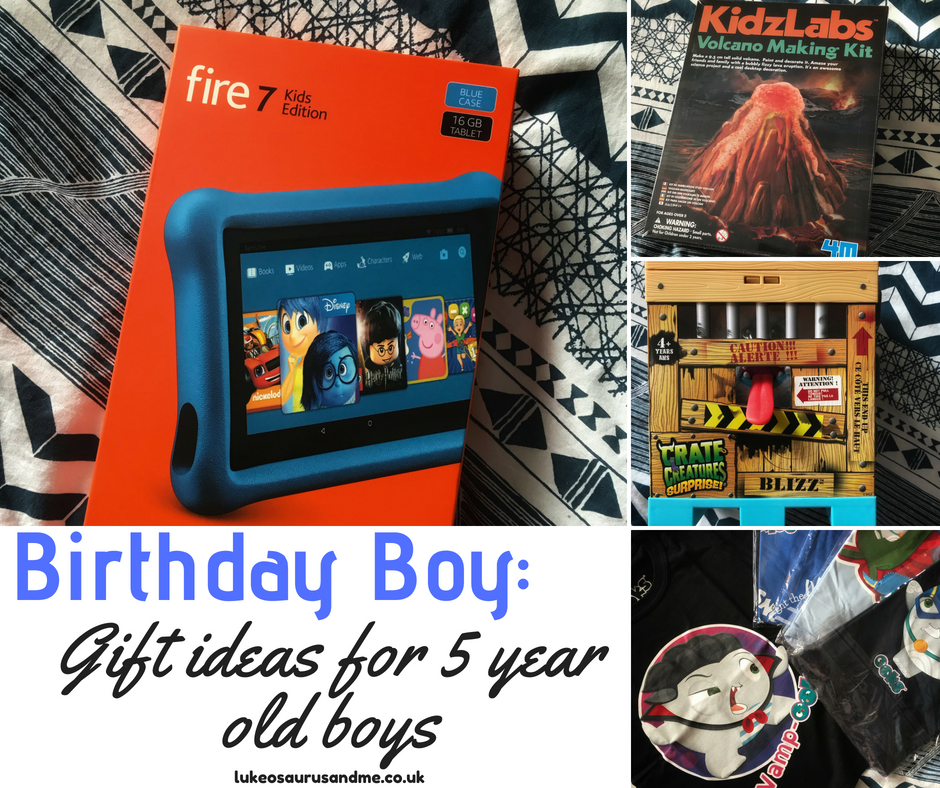 Luke’s birthday is coming up so quickly. I’ve been so focused on being pregnant and giving birth to Oscar, that the entire first half of the year seems to have flown by without me really noticing! I can’t believe we’re in August now and my oldest child will be turning 5 in just a few days; it’s crazy how fast time flies.

Originally, we were going to have a big party for him, but as his birthday falls in the summer holidays, we thought we’d save ourselves some money and treat him to a day out instead. We’re planning on heading to the New Forest Wild Life Park. Mikey and I visited it sometime last year but we have never taken Luke there, so it should be a really nice day out with both the boys.

Wondering what on Earth to do with him on his birthday is one thing, but trying to work out what presents to get him has been an even more difficult task! I’ve put together a little gift guide in case any other parents have found themselves in a similar situation and are stuck for exciting ideas.

Luke has managed to survive 5 years without having any form of tablet or smartphone of his own. Now that he’s a little older and his baby brother has arrived, we thought it would be a good idea to buy him a tablet. I’ve heard so many good things about the Amazon Fire 7 Kids Edition so when my search for the perfect tablet commenced, it was a no brainer. After giving birth to my second child, money is a huge niggle that’s always there in the back of my mind so I’m happy that the Fire 7 For Kids is a reasonable price and boasts loads of features. I especially like that Amazon will send you a new tablet if yours gets broken; very handy when you’ve got a clumsy kid like mine! I bought the Amazon Fire 7 Kid Edition from Amazon for £99.

I’ve heard so many great things about this new toy and read loads of positive reviews, so I knew it would be a great present to gift to Luke for his fifth birthday. This toy is like nothing I have seen before and I know that Luke will enjoy how unique it is. The Crate Creatures Surprise toy features a creature that is locked up in a crate, waiting to be released. The reusable packaging is actually part of the toy: you need to use the crowbar on the outside of the box to break open the lock and release your creature. We’ve got Blizz, a white and blue fuzzy little monster with yellow horns on his head. He looks a bit like what I’d imagine a yeti to look like! Each monster has 45 monstrously cool sound effects, as well as some cool additional features. You can talk to the monster and hear him talk back to you, you can feed him his favourite treat and listen to him chow down in delight. Knocking him over, flipping him and shaking the monster all make him roar in delight and pulling his big rubbery tongue will make his eyes glow and leave him shaking in rage. Each creature has their own special creature feature too – Blizz’s is the thrashing arms. I know Luke will really enjoying breaking his new monster friend out of his crate and interacting with him loads. Crate Creatures are available from Smyths Toy Stores, come with the batteries included and cost £39.99.

Luke adores anything science related, so this Volcano Making Kit from Find Me A Gift is bound to be a massive hit with him. This awesome science project allows you to build a 9.5cm tall solid volcano, paint and decorate it and then amaze all your family and friends with a bubbly lava eruption. It’s not suitable for children under the age of 3 and the recommended age is for over 8’s, but I think with adult supervision, a 5 year old would be able to complete this project easily. The box contains a solid plastic mould and some plaster of paris so you can construct your volcano, paints, brushes, a stirrer, graphics for decoration and some instructions on how to use the volcano and make it erupt. For the eruption, you do need to buy vinegar and baking soda as they’re not included in the box. Something as creative and as messy as this is bound to be a massive hit with the boys!

Can a birthday go by without someone buying extra clothes? I love spending money on new outfits for Luke and these t shirts from OOKS are seriously cute. OOKS combine digital and real world play to create colourful and exciting personalised childrens books. They’ve also recently launched their clothing line. The clothes and accessories available are absolutely gorgeous and super cute. I’ve got a collection of five fantastic t shirts for Luke and I know he’ll adore the bright, colourful characters and funny catch phrases.

OOKS works by downloading an app and letting your children answer some simple questions, such as their favourite food, what their personality is like, and what their favourite hobby is. They also get to create an avatar that’s completely unique to them! As the children play with the app, they begin to create their own magical story based on the choice they make. You can check your children’s books at any time by logging onto the OOKS website, you can also order the books to be printed and posted to you. The best bit? Your child’s name is listed as the author!

I didn’t actually buy this for Luke’s birthday, I bought it at the beginning of the summer holidays so that Mikey and Luke could have some boy time together once Oscar arrived and Mikey was on his paternity leave. Having had three weeks to look through it and pick science experiments to do, I would definitely recommend The Dad Lab as a great gift for both boys and girls around the age of 5. The Dad Lab book is packed full of great activities to do with children that are both educational and, most importantly, really, really fun! It’s split into different categories, so there’s something to do no matter what mood you’re in. From messy play to magical and colourful experiments – there’s something for everyone. It’s a great little purchase and I highly recommend it.