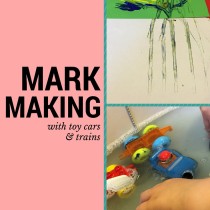 Warning: Parameter 2 to wp_hide_post_Public::query_posts_join() expected to be a reference, value given in /var/sites/l/lukeosaurusandme.co.uk/public_html/wp-includes/class-wp-hook.php on line 288


We’ve been exploring mark making a little bit more lately. Luke seems to really be enjoying the discovery side of things and I thought, since he’s obsessed with cars and trains, why not add some more fun to the mix and use them as well?

We collected a variety of vehicles that didn’t have stickers on them – this bits important for later – and gathered some coloured paper and plain white paper, as well as some bright coloured paint (paint like this is perfect

as it washes off little hands and cars easily).

We only used two colours of paint, blue and yellow, but Luke discovered that during the process of making marks and learning about the different tyre marks that were left, the paint also changed colour.

He was excited when he saw that Thomas the Tank Engine had managed to make the yellow and blue paint turn green on the paper.

He turned the cars upside down and spent some time twisting the wheels round, pointing and saying the names of the different colours that were left over from the colour mixing stage.

Some pieces of paper got covered in paint and the marks are distinguishable, but not that much different to someone simply running their finger up and down the page.

Other pieces of paper have a few very clear wheel marks. It seems the coloured paper got caked with the most paint and the plain white paper received the minimalist approach.

Once we had gone through several pieces of paper, it was time for the car wash.

We collected up our toy cars and toy trains in a big bowl and took to the bathroom sink.

Ideally, this activity would be much better in a sensory bin, but ours was in use!

I filled the sink with luke warm water and we used a very nearly empty bottle of washing up liquid to make lots of soapy bubbles.

In went the cars (this is why it’s important that they don’t have stickers on them – and also that they’re not electrical!) and they were lost to the bubbles!

Look stood on his stool and fished the cars out one by one. He started by swilling them about in the water, but when he realised this alone wasn’t going to get the paint off, he asked for something more.

I decided that we could make this more challenging by using a clean cheap toothbrush as a scrubbing brush. Luke had to work out how to hold the slippery cars and trains in one hand and the long handled tooth brush in the other.

It took a little while to get used to but with a lot of questions and the occasional ask for help, we got there in the end.

Finally, with the cars all clean, we dried them off with a towel, chucked them back into the big bowl and off Luke went to put them all back on his race track.

This was a really fun activity with plenty of learning potential. Luke learnt about colour mixing, mark making and put his fine and gross motor skills to the challenge. We’ll definitely be doing this one again, Luke really enjoyed it (but then again he loves ANYTHING with cars!)

Don’t forget to pin for later!

Hi, I’m Rachael – a 27 year old mum of 2 and full time blogger. I live just outside of London on the Surrey/Hampshire border with my fiancé and 2 children: Luke 6 & Oscar 1. I write about the ups and downs of motherhood and mental health, as well as fitness and children’s activities.

Warning: Parameter 2 to wp_hide_post_Public::query_posts_join() expected to be a reference, value given in /var/sites/l/lukeosaurusandme.co.uk/public_html/wp-includes/class-wp-hook.php on line 288

Family holidays are important! You can explore new places, try new things and bond as a family, without the stresses of home niggling away at you. A timeshare resale is so much more convenient than a hotel and a WorldMark by Wyndham timeshare is highly flexible. Enjoy your holidays!
Next Story »

Mark Making with Cars and Trains

*Some links on this blog may be affiliate links. Lukeosaurus And Me is a participant in the Amazon EU Associates Programme, an affiliate advertising programme designed to provide a means for sites to earn advertising fees by advertising and linking to Amazon.co.uk
%d bloggers like this:
This site uses cookies, which are small files stored on a server to help ensure a smooth user experience. Some cookies are functional and required in order to make this website work. AcceptRefuse third-party non-functional cookiesFull Policy