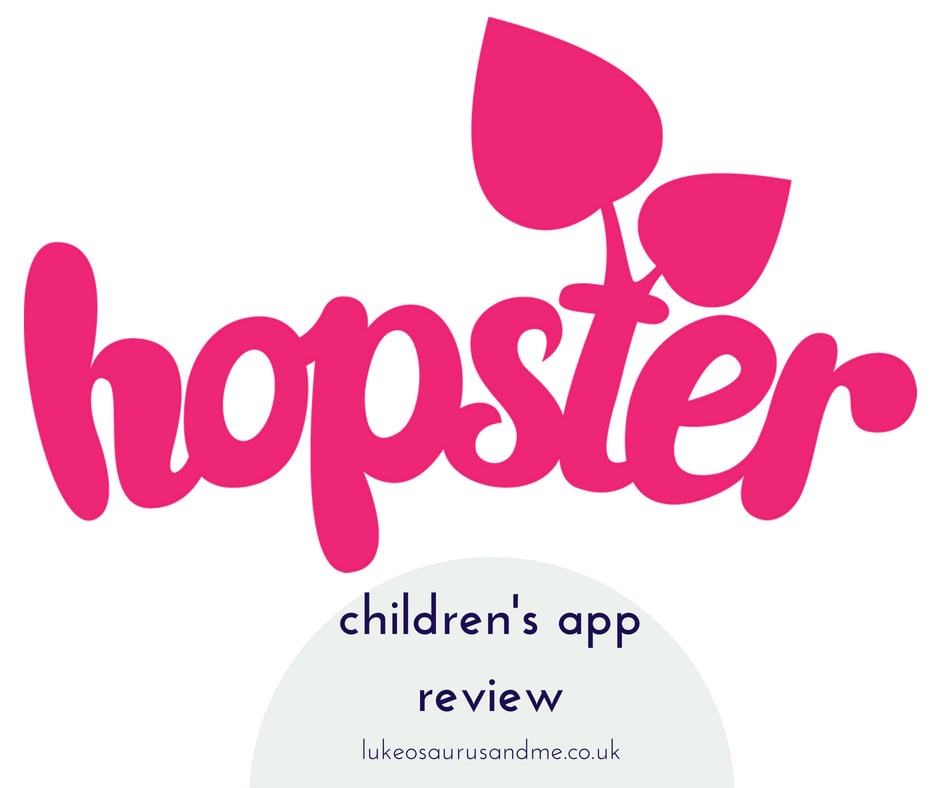 For the past few weeks, Luke has been trailing out children’s TV and game app, Hopster. Hopster is a fun app aimed at children aged 2-6 which helps with their development and understanding of the world.

Hopster’s mission is to help kids learn through the stories and games that they love. In my opinion, you can’t go wrong with an educational app from time to time; it can make screen time an absolute win/win for parents.

I have a few apps for Luke on my phone, however, this is the first one I have ever had that requires a subscription, so I was curious to see if the quality of content was actually better than the bog standard apps I already have.

What Does Hopster Offer?

In this one app, you’ll find a huge selection of TV shows, games and books as well as Hopster Create, a space exploration zone, music and a ‘grow’ section.

TV shows include family favourites such as Ben and Holly’s Little Kingdom, Pingu, Sesame Street, Story Bots and loads more. Luke’s a huge fan of the Story Bots and I’m so happy that he enjoys the show because it really is an educational gold mine.

The book section is also crammed full of eBooks that we all know and love, such as Mog the Forgetful Cat and Paddingtion Bear. These can be read to your child, or they can choose to read the books themselves.

Hopster Create is another of Luke’s favourite activities on the app. If you’re a regular reader of Lukeosaurus And Me, you’ll know he loves any excuse to get artistic and creative. Hopster Create allows you to draw pictures and even upload a photo of your face into an explorer’s photo frame.

The space section features a selection of videos and games from the characters you can find elsewhere on the app, but this time they’re solely focused on the topic of our universe. Under the ‘grow’ section, your child can learn about the growth cycle of plants and the importance of water and sunshine, and the music section is a selection of educational songs performed by the app’s characters.

The first thing I noticed about the Hopster app is that it is ad-free. Sometimes those in-game adverts can cause a real nuisance, whether it be because of interrupted game play or an accidental (maybe on purpose?) in-game purchase. Having an ad free children’s app certainly puts your mind at ease and you don’t feel the need to hover over the kids every now and then to make sure they’re not pressing things that they shouldn’t be. I know that free to play apps make their money from placing adverts, which I think is a bit cheeky for children’s apps, so it’s nice to know that Luke is always going to be safe when playing with Hopster.

Speaking of safety, Hopster has been especially designed for little fingers. It’s easy to navigate and takes developing minds into consideration. The TV content is fun and wholesome, weeding out all of the TV rubbish that we may not be entirely happy with our kids watching. I remember having a YouTube playlist on in the background once that started of innocently and ended up being weird and completely unsuitable for kids. Moral of the story – choosing a viewing platform that is specifically designed for kids is definitely the best way forward. Hopster has been reviewed and certified by kidSAFE, meeting their high standards for safety and kid’s privacy.

Along side the privacy theme, you are able to download your favourite content from the app and access it all offline. Perfect if you’re still worried about allowing your child free reign of the app, but also remarkably useful for long car journeys, the GP waiting room, or any other scenario where you may fancy giving your children a bit of a boredom buster. Additionally, you can view the app’s monthly stats which enable you to see what you’re children have been up to on Hopster – including what games and shows they have been interacting with.

Luke has been using this for about a month and a half now. Originally, I thought it would be a great app to download as it would give him something to do during the tricky times when his baby brother needs my attention. I thought it would be a good one because of the amount of content that the app offers, and I am happy to say that it has certainly delivered.

Luke is now in his last half term of Year R, so his little mind is constantly buzzing and he’s eager to develop his literacy and numeracy skills, even when he’s not at school. He loves a good challenge and so the educational games listed in Hopster have been great for him. His favourite game has been literacy based and is called Alphabet Hotel. Through playing this, he has learnt more about “special friend” sounds, such as ‘qu’ and ‘ch’.

Due to some of the rubbish weather we have had, Luke’s been using Hopster to learn more about his letters, get creative and watch videos during the May half term. Parents will know that cabin fever during the holidays can be killer, but Hopster has allowed him to go off for a few minutes and entertain himself, while I get on with writing, cleaning and attempting to drink a warm cup of coffee.

Overall, I’m really impressed with the amount of content that Hopster offers and the educational side of the videos and games is a huge bonus. It definitely helps me to feel a little less guilty about allowing him the odd bit of screen time. I can see Hopster being a massive part of our lives when Baby Number 2 is with us and I’m unable to give all my undivided attention to Luke. I won’t feel so guilty about not being able to be there for him 100% of the time when I know he’s happily playing some educational goals that are aiding his development at the same time as keeping him busy while I sort the baby out.

Hopster is available on both Android and ISO and costs £3.67 per month. You are free to cancel your subscription with Hopster at any time by heading to their website.

*I was given a voucher code to enable me to download Hopster for free in exchange for this honest review. Thoughts and opinions belong to me and Luke and we have been in no way influenced to write a great review for them.