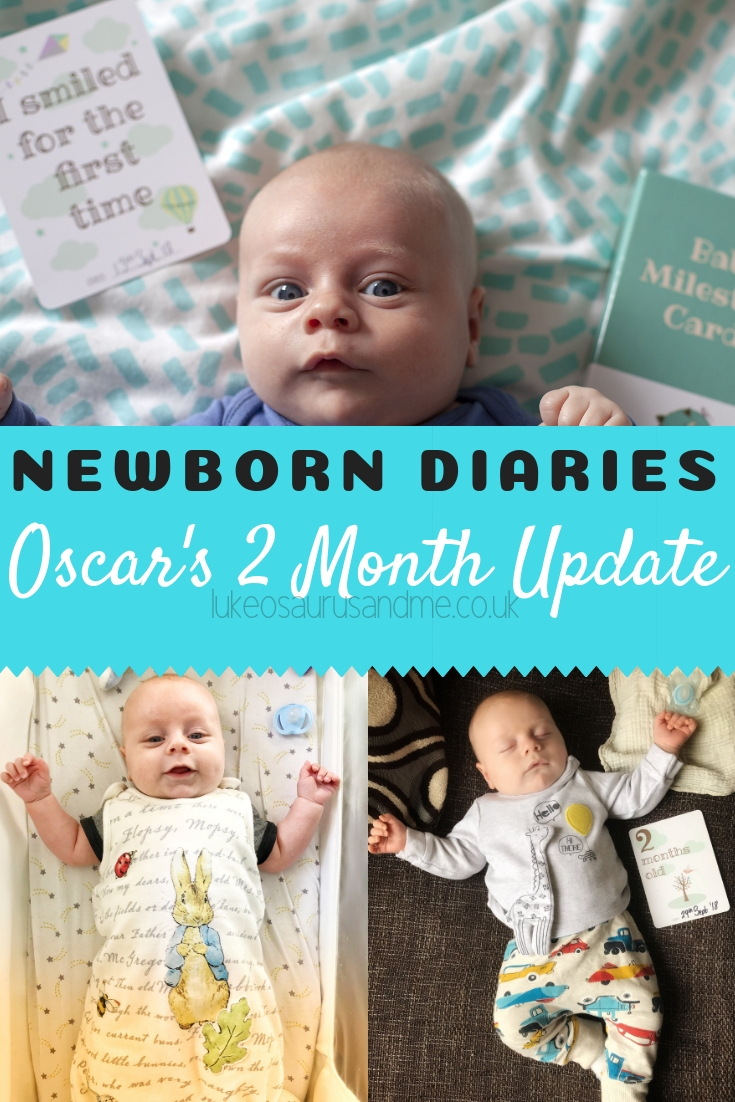 I can’t believe that Oscar is two months old already! I know that they say time flies, but they’re really not kidding around. I missed out on so much of the good stuff with Luke due to PND that I am trying my utmost to indulge myself in the first few months and soak up as many baby snuggles as I can. It’s definitely not always easy though and I am finding some things a real struggle, however, I am still managing to keep my head above the water (just about).

When people meet Oscar, they always mention his size. “He is a strapping lad” has to be the most used phrase by professionals as well as strangers in the street. They’re not wrong, he certainly is a big boy and he’s very strong. We’ve not had him weighed this month yet (the clinic is tomorrow!), but last month he weighed a healthy 12lb 10oz. I mean, when he was born he weighed 9lb 2oz, so he was never going to be small, was he? He’s currently fitting into 0-3 month clothes – the full sleepsuits in this size are getting a bit snug at the feet. From all of his scans, we knew he was going to be a tall baby, but we weren’t expecting to have to buy the next size up sleepsuits for winter.

He also has the biggest, bluest eyes. By now, Luke’s eyes had started to change colour and he now has hazel coloured eyes (Mikey refuses to believe ‘hazel’ is a colour and says that his eyes are brown, back me up here!). I’m actually really happy that Oscar’s eyes have stayed a brilliant, bright blue colour. They’re really striking and they’re much prettier than either mine or his daddy’s. I’m even a little jealous.

Since his last update, Oscar has certainly discovered his voice. We have had big, big smiles for a long while now and I think they may be the cutest thing I have ever seen. Over the past few weeks, he’s also started chatting to us loads. This is also insanely cute and I keep trying to get videos of it but failing miserably! At least I’ve been able to keep track of his big milestones!  He loves have a good old natter and after school, Luke can often be caught have a good gossip with his little brother, much to everyone’s delight. It melts my heart to see my two boys together and Luke is so cute to include him. He always tells him how his day at school was and when Oscar gets upset, he’s the first one there offering him a dummy and reassuring him by saying, “Don’t worry Oscar, Mummy’s coming!”

The boy is sleeping a whopping 7 hours a night. Hurrah! It’s blissful, truly it is. But I know it won’t last long and sleep regressions are on the horizon. For now, however, I’m really happy to have reached the stage where we can get a full night’s sleep. It’s great for Mikey as well because I know the sleep deprivation was something he was really struggling with. For some reason, when I warned him about these sorts of things (as he’s a first time dad), he didn’t take me seriously and he told me that he just assumed I was overreacting. So…it’s his own fault really!

Something that probably helps with the sleep situation is the discovery of his hands. Magical hands that he can shove in his mouth and suck on when he fancies it. We are using dummies this time around (I avoided them with Luke out of stubborness and naivety) but during the night when he wants to soothe himself, he’ll find his hand and suck on his fingers. He actually tends to suck on his ring and middle finger, which means it looks like he’s doing little rock bunnies, much to my amusement!

He’s so alert and into everything! He loves being talked to and read to. I actually combine work and play with him sometimes by reading blog posts out loud to him. He also loves his bunny rattles. He has two, one from us and one from his grandma and grandad. He likes listening to the rattle but he also loves having the super soft bunny ears run over his face. He gives the biggest smiles when we do this! To everyone’s annoyance, both my boys love Baby Shark. Luke love singing it to Oscar and Oscar loves the music as well as watching the videos on his brother’s tablet. He’s also really starting to get into his play mat, which is exciting! It also makes life easier because it’s another way of putting him down and entertaining him, without having to be holding him 24/7.

Well as he’s 2 months old, he very recently had his 8 weeks immunisations. He was okay with the sugary liquid part that they give him first for the Rotavirus. Because he’s been fed expressed breast milk from bottles, he has sometimes suffered from wind and subsequently been given Infacol or Dentinox to help. I reckon that because he’s had these sugary medicines before, he wasn’t at all bothered by the liquid that the nurse gave him. However, the the nurse, who I am sure is a lovely lady, stabbed my poor baby in one leg once and then twice again in the other leg. It was horrible watching him cry. He was actually crying proper tears; they were streaming down his face and I felt traumatised. Typically, ten minutes later he was asleep in his buggy – obviously he wasn’t as bothered by the whole thing as I was. I didn’t give him Calpol for a good two hours, maybe. As he was asleep, I didn’t see the point of waking him up to give him a dosage. I just waited until we got home and he woke up of his own accord. He had a slight temperature that afternoon and did have Calpol when he woke up and before bed. He also had a dose in the morning but by lunch time the next day he was back to his usually bubbly self.

This past month has been quite tough. In some ways, having two children isn’t really that different. Mostly the routines are the same and wherever we go, Oscar goes. The only thing I am really struggling with is trying to fit everything in. I just can’t seem to get the work/home balance right. Currently (not for much longer), Luke’s dad is doing the school run, which should give me an extra two hours of my day.

However, being at home with Oscar and trying to make a living from being a self employed blogger is bloody hard work. I haven’t yet missed any deadlines and I’m still making a reasonable profit, but my workload is mounting up.

It seems impossible to type out a post in one hit. What used to take me an hour to write now takes up a whole day in chunks – not easy when your work day starts at 8:45 and ends at 3 because your eldest gets back from school. I can totally see why influencers like Louise Pentland employed a nanny for a few days a week. I’ve no idea how she was doing it all herself for so long – my workload is nothing compared to hers and yet she was bossing it for quite a while.

I am also finding it difficult to just get all the life admin done. Where’s the time to do the washing up, cleaning and laundry? How do I find the time to eat? It’s something that I’m really going to have to work on and try and find a balance because I can feel myself starting to crack under the strain. It seems like some things are going to have to take a back seat for a while, I just need to figure out which things!

5 Things To Keep You Sane When You Have A Newborn!