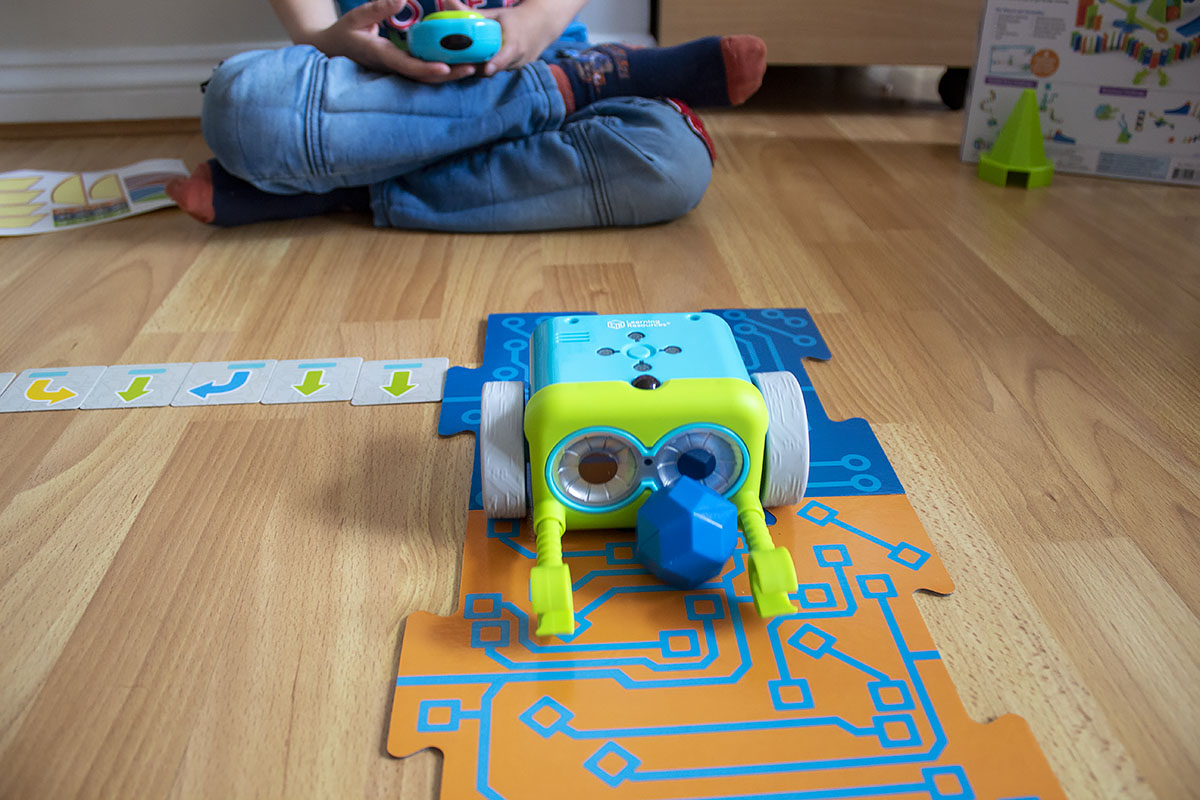 Lately Luke has been absolutely loving his new robot pal, Botley ® . Botley The Coding Robot was kindly sent to us by Learning Resources UK in exchange for an honest review. Although Botley and the accompanying activity pack were gifted, all opinions and photos are my own.

Botley The Coding Robot is a brilliant screen free STEM toy for kids.

As a parent I am always trying to find ways to entertain the kids without the use of screens. I find it quite tricky to keep Luke focused on one particular activity or toy for a decent period of time. It seems that he rather quickly gets bored, which leads to me trying to find something else for him to do that will hold his concentration for another five minutes. That cycle repeats itself over and over until I either drag us all outside or give in and turn on the TV.

Botley has actually held his own against my fickle boy and has managed to hold Luke’s attention for (I’m not exaggerating here) literally hours. This must down to Botley’s STEM element and the satisfaction completing a successful coding sequence gives him. That and the fact there are so many coding options and challenges to try and complete.

Coding is becoming an extremely important skill that our children should be learning about.

Coding is a huge part of our society now. We rely so much on AI and other technologies in our day to day lives that teaching coding and creating inspiring STEM based activities is becoming vitally important. Botley The Coding Robot is a great introduction to coding and is aimed at children between 5 and 9 years old.

The word ‘coding’ sounds quite daunting, doesn’t it? Especially when we’re talking about children as young as 5, but Botley does a brilliant job of introducing basic coding commands and the appropriate terminology. There are 77 pieces included in the Botley kit and a comprehensive set of instructions, meaning that children can learn to code, create sequences and programme Botley to complete custom built obstacle courses in no time at all.

What do you get when you buy Botley The Coding Robot?

The box is pretty big and that’s because it’s packed full of accessories that are designed to make your coding experiences with Botley really fun and customisable. Included in the kit, you get Botley, a transmitter (easy to use remote), 40 coding cards, six boards, a sheet of stickers for customisation and a variety of accessories to create obstacles and activities for Botley. These include 8 sticks, 12 cubes, two cones, two flags, two balls and a goal.

Batteries were not included so we had to go and stock up on AAA’s and find a screwdriver small enough to undo the screws on both the remote and the underside of Botley. Once the batteries were in however, setting Botley up and planning out our first code was fairly simple. The instruction booklet goes into detail about the various codes, what they do and how to use them. Each coding command also has a troubleshooting section, which is really useful as a few times Luke has followed the instructions, pressed the transmit button and nothing has happened. It definitely took us both a little while to get to grips with the more complicated coding sequences, but getting Botley to move forward, turn around and come back to him only took about 5 minutes. You can also turn the boards over and piece them together in order to create a black line for Botley to follow in ‘LINE’ mode.

I will say that if you’re going to be using Botley, it’s something that you need to be involved in, especially with younger children. There are lots of coding options and it can appear a bit overwhelming at first. The steps that you can make Botley perform are:

Once Luke got the hang of performing these steps, he really went on to challenge himself. The instructional booklet lists a few tasks for the children to try and perform and Luke happily spent an afternoon doing these. Then the next time Botley was out he really ramped things up and started to create his own tasks. Using the code cards he was able to keep track of his sequences and his favourite courses to build are ones where Botley has to steer a ball through the course and then get it into the goal.

I’ve been watching Luke play with Botley and it’s fascinating to watch the cogs in his head turn! With a set on instructions in front of him, he can follow direction and achieve great results, which in turn made him feel successful and confident! After a while, he felt he’d got the hang of it enough to try creating his own courses for Botley. This is where the critical thinking and logic came in. I could see his face screw up with concentration as he tried to think two or three steps ahead and create a course that was challenging but doable. At this stage, the coding cards included in the Botley box really came in handy as he was able to plan out his sequence and then reference it when inputting the code. It was also great to follow the sequence as Botley was on-the-go as it meant Luke could identify any mistakes in his sequence and then try and figure out the correct command/coding card that he needed to replace it with.

My overall thoughts on Botley The Coding Robot

Luke is still absolutely obsessed with Botley, even after having him and playing with him nearly every day for over a month. I think what keeps him coming back for more is that there are so many possibilities and challenges to explore with Botley. I’ve noticed that he has started to speed up his programming skills and can now make Botley do all sorts of things without thinking too much about each step. He still uses the coding cards to plan out his sequence and follows it while Botley is moving to make sure the code is correct. We were also sent the Botley Action Challenge Accessory Set (aff) which packs 40 additional pieces to add to the excitement and difficulty of Luke’s obstacle courses.

If you are looking for an inspiring and educational toy that will keep your children engaged, Botley The Coding Robot is a great little product. We have had some trouble with the transmitter not working correctly after we’ve inputted a code which we’ve yet to figure out but it usually works the second time around. I’m not sure if Luke’s inputting it too quickly or if sometimes it just takes a second to catch up. It is a bit annoying, especially when the transmitter is pointing directly at Botley, but as I say it usually picks it up the second time around.

Squirrel Squad and the Tale Of One-Eared Bob

Learning To Code With Botley® The Coding Robot