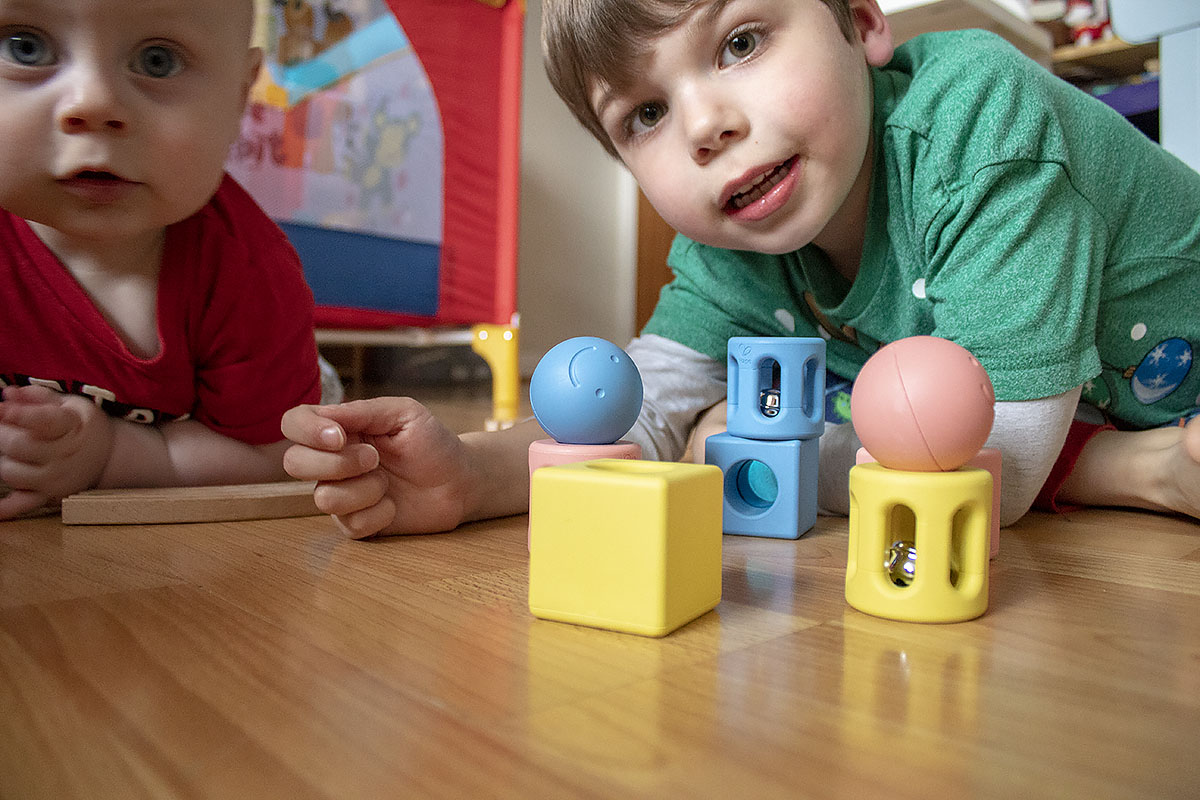 Oscar’s at such a lovely age now! Not only is he sofa surfing, eating lots and enjoying his new found freedom, he can also finally play with his big brother. This is really lovely for both boys and I know Luke’s been dying to be able to play games with Oscar. Don’t get me wrong, they’re not going to sit there playing Snakes and Ladders together, but I have watched Luke drag Oscar into his imaginative play. It’s beyond adorable…it’s the feeling that every parent who’s had more than one child wants to feel. For the most part it is THE reason couples have another child – so they can play nicely together!

We were recently sent some goodies from toy company, Hape. Luke and Oscar were excited to open the package together. I’ve got to say that, at first, Oscar was definitely more interested in the box than the toys, but Luke was straight in there!

In the box were some new toys aimed at Oscar, who’s 9 months old. We were sent two fun toys to keep the boys busy: the Hape Baby Animal Farm Book and Geometric Rattle Trio.

Spring is in the air and these beautiful soft pastel coloured rattles are perfect for babies who love listening out for new sounds and looking for new colours and shapes. They’re designed to fit nicely in tiny hands and they’re a great size and shape for Oscar. The rattle with slits up the side with a jingle bell in the middle seems to be Oscar’s favourite. It’s the easiest to pick up and his little fingers fit through the slits making it easy for him to shake around, throw and chase. It rolls along the floor well and jingles as it goes, which encourages Oscar to crawl across the floor chasing it. He then usually picks it up, shakes it and throws it across the room again.

The ball, which I think is filled with rice as it makes a more dull rattly sound is also pretty great, although it did go straight in his mouth. It’s a good size though, so although he put it in his mouth, I wasn’t worried about him choking – I just gently discouraged him from doing it. They are easy to pick up too and feature little smiley faces that are cut into them, making them seriously cute.

The square blocks are really fun and were a big hit with both boys. If you pick up the blue block, the middle is made from a translucent plastic that allows you to look through it and see the world around you all in blue. It’s very cool! The same goes for the yellow and pink blocks – each featuring this translucent plastic. Luke really loved this and we spent quite a lot of time looking at all the things around the room in different colours.

The Geometric Rattle Trio set is available from Amazon for £22.

We’re a family of book lovers and so, naturally, this Baby’s Farm Animal book has been going down a treat. It’s been a really nice thing for the boys to share as Luke has taken to sitting on the floor with Oscar and making up stories using the book. This book is made from wood which is, thankfully, safe for teething babies to bite on. The images are big and clear, easy for little ones to see. It’s a little early on in life, but I have been pointing out the different farm animals and the different colours when sitting with Oscar and using the book. He seems to really love it and is quite engaged when we’re together on the floor playing with it. He also really, really likes chewing on it!

The Baby’s Farm Animal book is available from Amazon for £3.99.

Both of these toys from Hape have been a really nice addition to our collection and both boys have enjoyed playing with them. It’s lovely to see Luke getting more involved with Oscar now that he’s crawling and moving around a lot more. The toys have provided some lovely bonding time between the two of them and I love watching how kind and gentle Luke is towards his little brother!

A Day Out With Thomas Review